This week’s most eagerly anticipated macro event is the European Central Bank policy decision, which is due on Thursday at 13:15 BST (08:15 EDT) with the press conference taking place at 13:45 BST. This will bring the euro and DAX into a sharp focus.

What are analyst expectations about ECB?

There is a growing feeling in the market that the gradual and cautious normalisation process the ECB started at the end of 2021 has been the wrong decision and that to make up for that slow and late, response it will now proceed more aggressively. Indeed, even until its June meeting, the ECB was pre-committing to a 25-basis point hike in July. But with the broad weakening of the euro helping to import more inflation in the eurozone, the ECB could surprise with a 50 bp hike instead in order to prevent price pressures from accelerating further.

Up until a few days ago, investors were convinced that that the ECB would raise rates by 25 basis points, finally delivering its first hike since 2011. The ECB had been very clear that the hiking would start with 25 bps in July, something which the central bank pre-committed to at its June meeting when it also ended its Asset Purchase Programme.

Since then, however, a number of things have happened:

In a speech a few days ahead of the publication of the June CPI, ECB President Christine Lagarde indicated the central bank would go beyond 25 basis points, saying: “There are clearly conditions in which gradualism would not be appropriate.” Lagarde added that “if, for example, we were to see higher inflation threatening to de-anchor inflation expectations, or signs of a more permanent loss of economic potential that limits resource availability, we would need to withdraw accommodation more promptly to stamp out the risk of a self-fulfilling spiral.”

Well, given that inflation has surged to a new record high in the Eurozone, it looks like a more forceful ECB might be needed. In fact, that’s exactly what markets are pricing in: 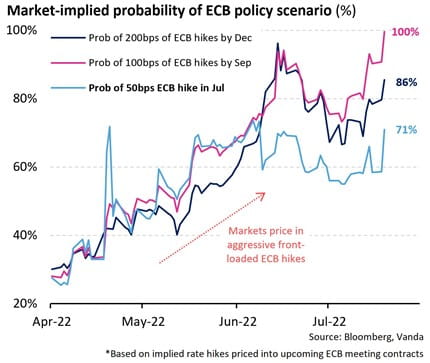 The chart above shows that money markets have now priced in around 70% odds of a 50 bps rate hike on Thursday. Interestingly, a 1% hike by September is now fully expected, which means the markets is expecting back-to-back hikes of 50 basis points in July and September.

The ECB faces a key dilemma, as per my colleague Joe Perry. “Christine Lagarde will have to walk a thin line when trying to decide whether the central bank will hike rates by 25bps or 50bps this week!  On one hand the central bank needs to bring down inflation, however on the other hand, it doesn’t want to tip the European economy into a recession.”

Will the ECB still hike by only 25 basis points?

It is possible that the ECB could do that given that the majority of economists predict the ECB will hike by 25 basis points this week. According to Bloomberg, just four of 53 in its survey predicted a half-point increase. Obviously, those expectations must have changed in more recent days, but I can imagine there will be some economists still expecting a standard 25 bp hike – not least because of the lack of economic growth.

How will the euro react to ECB?

The EUR/USD has been stable over the last few days, finding good support from parity. At the time of writing on Tuesday, the EUR/USD had recovered to above 1.0250. No doubt, the 250-pip rise off parity is in response to raised expectations over a 50-basis point hike. There’s thus the scope for disappointment if the ECB hikes only by 25 bps instead. If that’s the case, a revisit of parity cannot be ruled out. By my base case is 50 bps now and as such, I am expecting the EUR/USD to at least rise to the next level of potential resistance around 1.0350 from here. 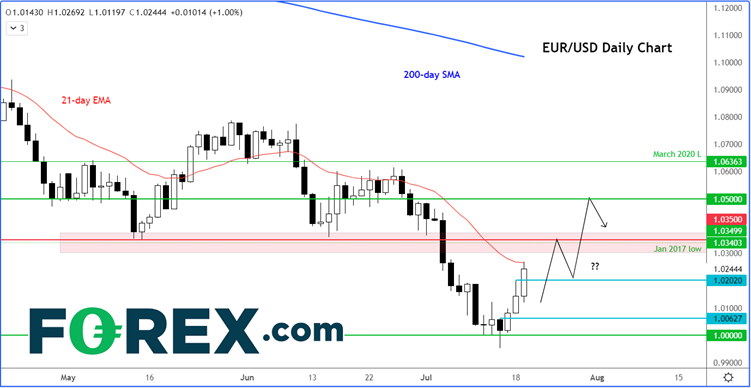 Some of the focus will be on any details of ECB’s anti-fragmentation tool intended to allow the central bank to purchase bonds of countries with higher yielding rates, in order to prevent fragmentation of peripheral European countries vs core European countries. It will be interesting to see how the ECB will be able to put one foot on the brakes and the other on the accelerator.

When is the ECB Interest Rate Decision?

Why is this particular decision so important?

There is a level of uncertainty in terms of whether it will be 25 or 50 basis point rate hike. But more to the point, it will be the first rise in interest rates in 11 years.

Traders’ focus will turn to PMIs after ECB

As mentioned, attention will also be paid to the ECB’s anti-fragmentation tool, especially in light of Italy’s political problems coming to the forefront of investors’ minds again.

With the focus also turning towards the economy and recession, Friday’s publication of PMI data will be very important and may even be the deciding factor in terms of how aggressive or otherwise the ECB will be in the subsequent meeting.