Today’s biggest surprise was perhaps the rallying stock markets with the UK’s FTSE 100 climbing by a good 3.5%, led by stocks that had suffered heavily in the immediate aftermath of the Brexit vote. The FTSE was no doubt supported also by the rallying prices of commodities which helped the precious metals miner Fresnillo climb nearly 10% to top the index. Crude oil also jumped following the publication of the latest US stockpiles report, which showed a sharper than expected 4 million drawdown for the week ending June 24. This added further fuel to the stock market rally, but as of yet it hasn’t provided significant support for the Canadian dollar. The latter was flat against the euro, but did manage to rise slightly against the US dollar which fell not only because of today’s "risk-on" trade but also because of poor economic data in the US as pending home sales dropped some 3.7% month over month in May, which was also the first drop on a year-over-year basis since August 2014.

Looking ahead to tomorrow, the economic calendar is busier with lots of European data scheduled for release in the morning including German Retail Sales and Unemployment Change, French Consumer Spending and Eurozone CPI Flash Estimate. In the afternoon, we will have the monthly Canadian GDP estimate followed by US weekly unemployment claims and Chicago PMI.

The European data may help inspire the EUR/CAD to make a decisive move after its recent consolidation. This cross has been making a series of lower highs and lower lows in recent times, causing the moving averages to move in the "wrong" order. The EUR/CAD has already broken a medium-term bullish trend line, too, although it remains well above its long-term upward trend. Meanwhile, after forming a large bearish engulfing candle on Friday, the EUR/CAD has created an inside bar, a doji and today another inside bar formation on its daily chart. These candlestick formations point to indecision, but Friday’s bearish engulfing candle suggests that underlying trend is essentially bearish.

Given these technical indications, the cross is more likely to head lower than higher in the coming weeks. As such, traders should watch price action around key resistance levels closely – such as 1.4470, which was being tested at the time of this writing. If support at 1.4320 breaks down, then we may see the start of a more significant move to the downside, perhaps towards 1.4050 initially. This bearish view will become invalid upon a break above the bearish trend line at Friday’s high at 1.4580. If seen, a rally towards the 200 MA could be the outcome. 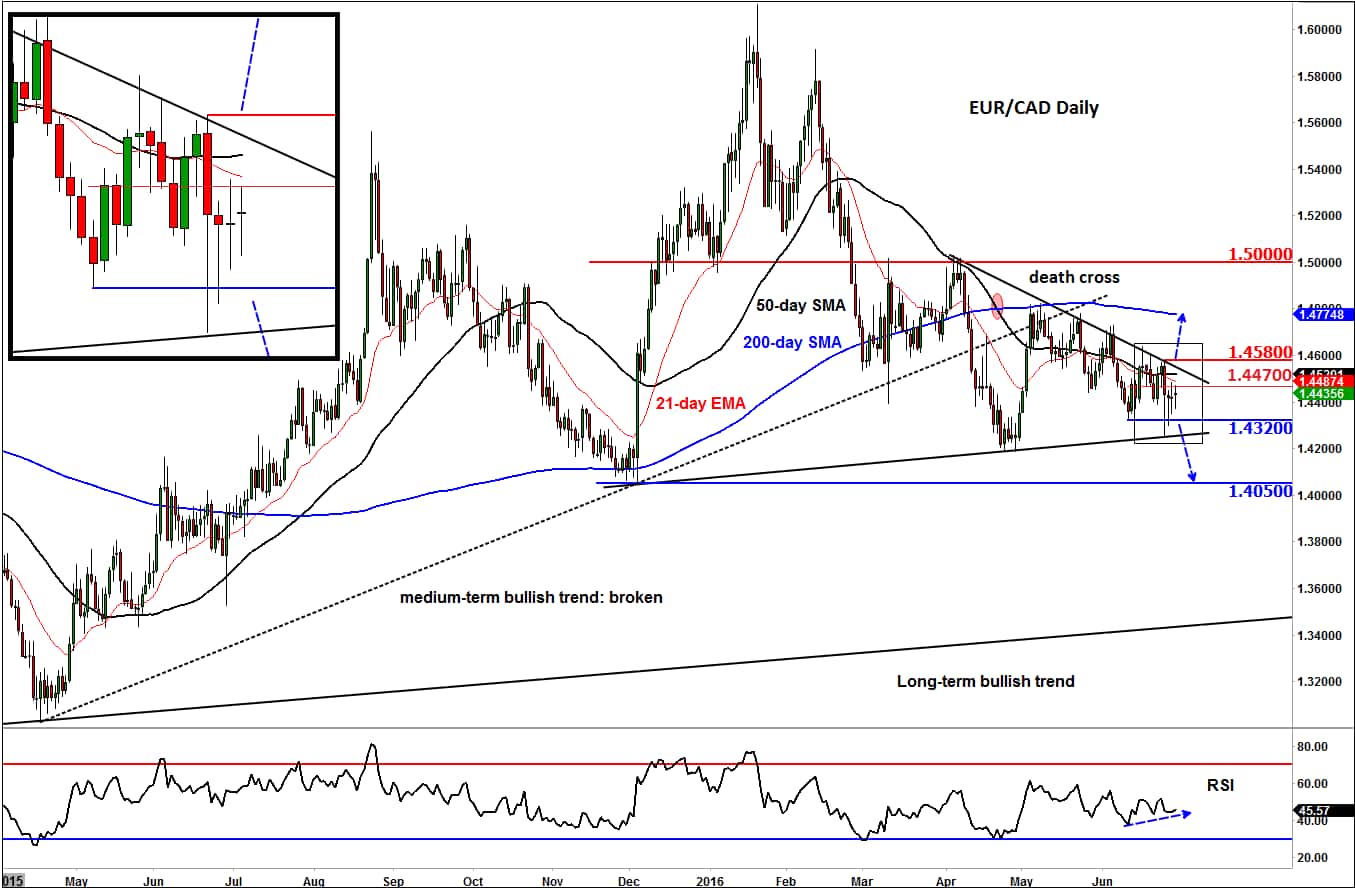