Today, the GBP/USD dropped to a new 31-year low as it breached last Monday’s low at 1.3120 amid ongoing Brexit worries. Helping the pound move towards 1.30 was comments from Bank of England Governor Mark Carney and downbeat economic data. Mr Carney said the UK is facing a ‘period of uncertainty and economic adjustment’ following the Brexit vote as he delivered the BoE’s Financial Stability Report. In it, the BoE highlighted several risks, including in the commercial property market, where foreign inflows have already fallen by 50% in the first three months of 2016, and the high level of UK household indebtedness. The BoE has consequently eased special capital requirements for banks, which means up to £150 billion could be freed up for lending. Earlier, the UK services PMI came in weaker than expected, printing 52.3 for June compared to 53.5 in May. Yesterday, the construction PMI showed a big drop, which suggested that activity in the sector was its lowest since in June since 2009. This triggered a sell-off in homebuilders, causing the FTSE to fall and the UK index has further extended its decline today, although it is off the lows as we go to press.

The next domino to fall could be the EUR/USD. Ahead of Friday’s US jobs report, the world’s most heavily-traded pair has staged a noticeable bounce since hitting a low of around 1.0910/15 in the immediate aftermath of the Brexit vote. If Brexit concerns were to rise further, it could impact the euro, like it did a couple of weeks ago. The dollar may also regain its poise on safe haven flows, providing further pressure for the EUR/USD exchange rate.

In fact, the daily chart of the EUR/USD shows price has reached a key resistance level today at 1.1185. As can be seen, this level marks the backside of the broken long-term bullish trend line. Therefore what happens here could have a big impact as far as the short-term direction is concerned.

If the 1.1185 level holds as resistance and price forms a reversal-looking candlestick pattern around it, then we may see in the coming days some further momentum-based selling pressure. Initially, the sellers will likely target support and the 200-day moving average at 1.1100, which could be reached or breached as early as today. Thereafter, there is little further in the way of prior reference points until the low hit in the immediate aftermath of the Brexit vote, at 1.0910/15 area. Slightly ahead of this region is where the 61.8% Fibonacci retracement of the bounce from the December low meets the support trend of the bearish channel, at 1.10940/50.

However if the EUR/USD climbs back above the broken bullish trend then there is a possibility for a bigger recovery, although initially the bulls will want to watch the area around 1.1230/40 for potential resistance – here the previous support meets the 61.8% Fibonacci retracement against the high achieved just before the Brexit vote. But the potential rally could eventually reach the top of the bearish channel around 1.1350. 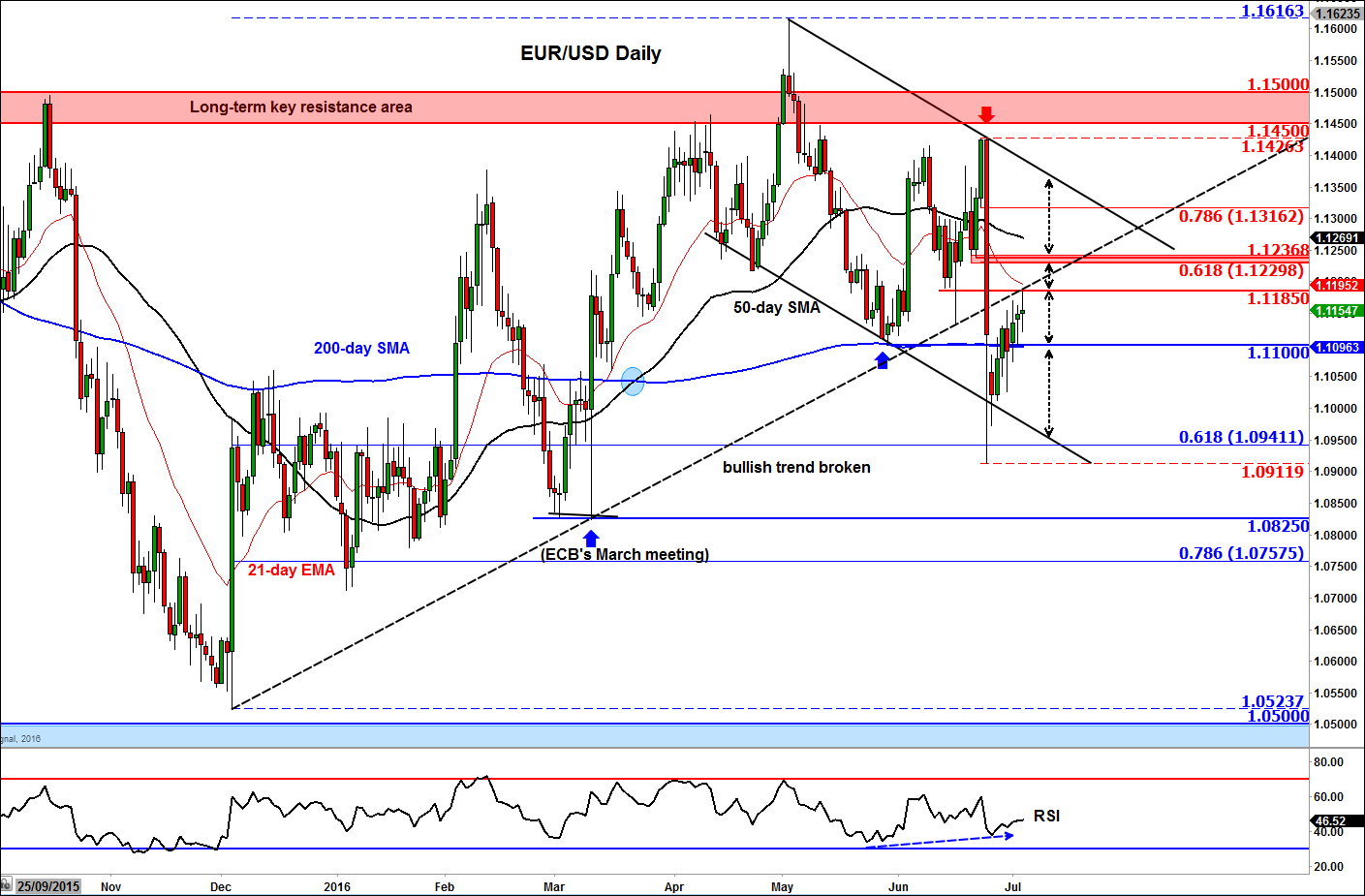