The euro has been on the rise first thing this morning in an otherwise quiet day. The single currency found renewed support after being hit last week by reports that the European Central Bank officials were mulling a slower pace of hikes than previously expected, with idea of a slower move in March 'gaining support'. Well, that report was called into question by renewed hawkish comments from ECB officials. This morning, for example, Governing Council member Klaas Knot said that the ECB would raise interest rates by 50 basis points in February and March and will continue to raise rates after. A week earlier, ECB President Christine Lagarde had said a similar thing. As a result, the euro crosses found support, with the likes of EUR/GBP, EUR/JPY and EUR/CHF all gaining ground.

Among the euro crosses, the EUR/CHF looks the most interesting pair to me after it broke out of a tight consolidation range last week, before rising sharply and then slumping on the back of that “ECB sources” report. But after renewed hawkish commentary, the EUR/CHF is on the rise again as it held support in the former resistance area circa 0.99. Today it is finding itself above parity again. The path of least resistance thus remains to the upside until something changes fundamentally. 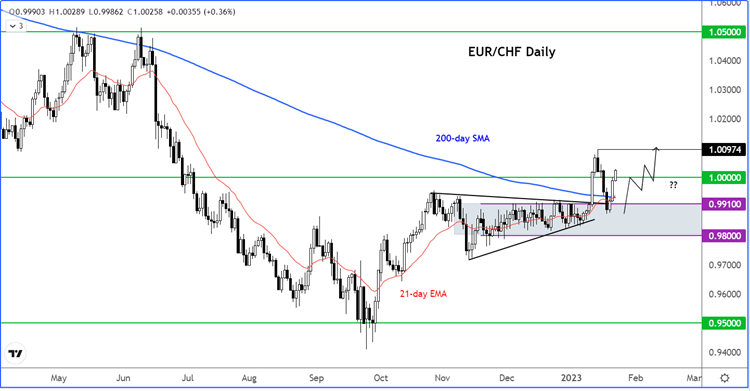 The Swiss National Bank is among the least hawkish of central banks out there, thanks to a relatively more stable inflation in Switzerland compared to the rest of the world last year. The SNB tightened its policy interest rate three times in 2022 and analysts are expecting rates to rise again from the current level of 1%, something which the SNB chair Thomas Jordan hinted about on Friday by saying that fighting inflation and ensuring price stability is "absolutely essential."  Still, the SNB is seen having one of the lowest interest rates around the world, something which should discourage investors from parking their funds at the ECB.

View more
US open: Stocks plunge after NFP report smashes expectations
BP Q4 earnings preview: Where next for BP stock?
Reddit stocks: what meme stocks are trending?
Gold down but not out as traders eye NFP
Where next for Amazon stock as AWS growth continues to stall?
Where next for Alphabet stock as growth grinds to slowest pace on record?