As my colleague Fawad Razaqzada noted earlier today, the British pound has finally caught a small bid today after selling off sharply through the first three days of the week (see “Brexit-hit GBP/USD rebounds ahead of UK GDP and US CPI” for more). There is certainly some prospect of a bounce in GBP/USD, which is testing a critical long-term Fibonacci retracement, but we also wanted to a key make-or-break level for the recent rally in EUR/GBP.

Looking at the daily chart, EUR/GBP broke out to a fresh year-to-date high yesterday, eventually surging up to hit its highest level since last October near 0.9030 in this morning’s trade. That said, rates have now reversed to show a possible bearish “dark cloud cover” pattern in development, which could point to a near-term pullback. Such a move wouldn’t be particularly surprising, with the unit hitting the top of its 2-month bullish channel as well.

Technically speaking, the near-term horizontal levels to watch will be the Q4 2017 highs around 0.9030 and March’s previous-resistance-turned-support at 0.8970. Given the near-term bullish momentum, trend followers should be inclined to look for buying opportunities on any near-term dips toward 0.8970 support or the bottom of the recent channel in the mid-0.8900s. Only a break below the month’s low around 0.8855 would through the near-term bullish bias into doubt. 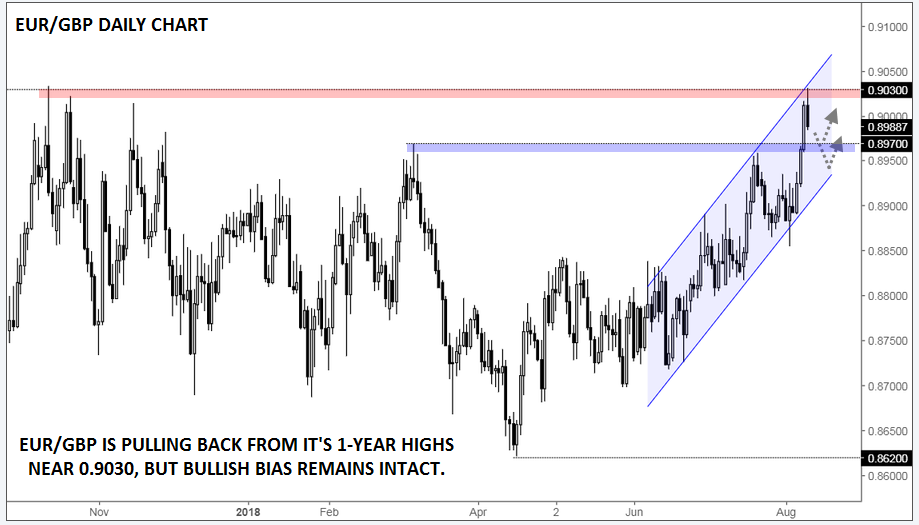