Equity markets were mostly higher overnight with the Hang Seng taking the lead following reports that Hong Kong leaders have agreed a way to begin removing all quarantine measures (but only after ‘proper preparation’).

Sweden are expected to match the ECB’s 75bp hike today, taking rates from 0.75% to 1.5%. And that would be their highest rate since July 2012 if they do. And economists also favour the SNB to also hike by 75bp on Thursday to 0.5%.

Japan’s inflation reached a near eight-year high, making it the fifth consecutive month for it to remain above the BOJ’s 2% target. Yet its unlikely to see the BOJ later their ultra-dovish policy this week, although the longer inflation trends higher above their target, the great the pressure becomes for them to act.

Canada’s inflation report is in focus at 13:30 BST 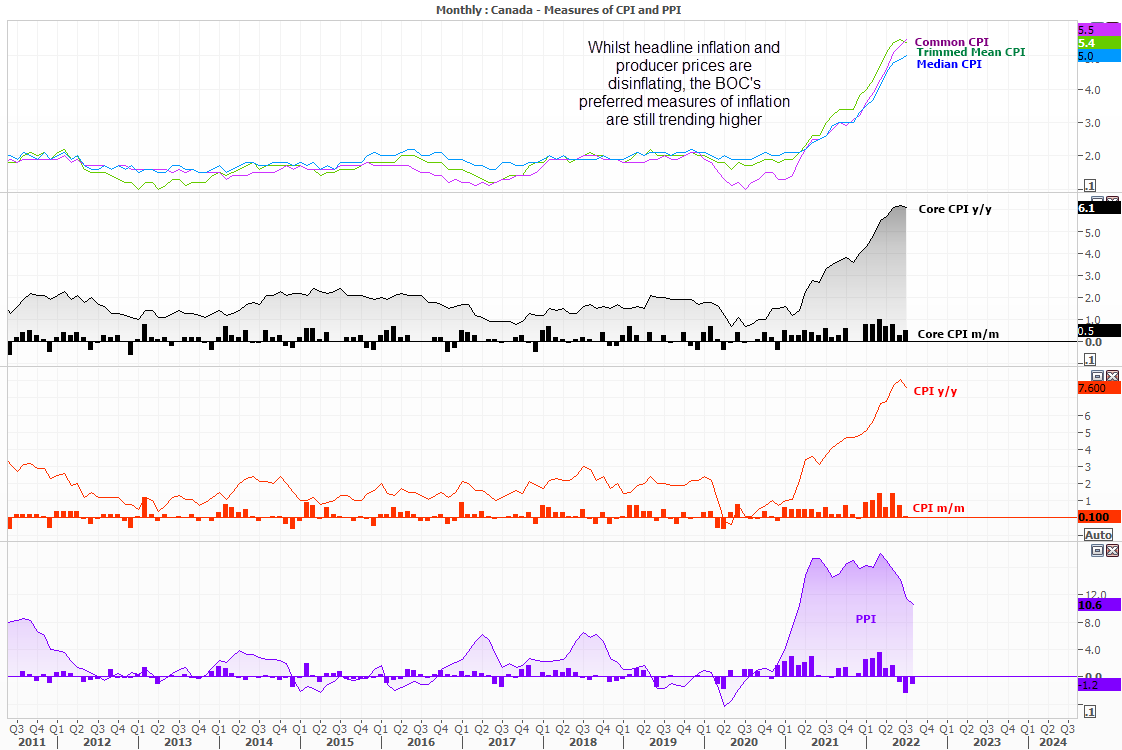 Further signs of disinflation are forecast to appear for some of the headline prints. CPI is expected to fall to 7.3% y/y from 7.6% - which would be its lowest annual level since April. Inflation is also expected to contract by -0.1% m/m – which would be its first negative print in eight months and third consecutive lower print. Placed alongside the deceleration of producer prices it is indeed a positive sign. However, take note that the BOC pace closer attention to the common, median and trimmed CPI’s – which are slower moving tan the underlying headline prints. But if headline inflation is moving lower then it is only a matter of time for their preferred measures to follow.

Common and median CPI are expected to remain stable at 5.5% y/y and 5.0% y/y respectively, and trimmed mean is expected to rise to 5.5%. And that is likely to keep the average of these tree at a record high.

CAD/JPY has been within a retracement phase since the 110.59 high, although it has stalled around a cluster of support between 107.50 – 108 (July high, 38.2% Fibonacci level, monthly R1 pivot point). Were it not for the support zone we’d focus on the bearish trend (and this could still provide a bearish opportunity on the 1-hour timeframe or below). But on this timeframe we’d want to see a break beneath 107.45 before assuming trend continuation.

But if momentum turns higher then the bias remains bullish above 107.45 and for an initial move to 109.17. But appetite for risk also plays a part here, so a soft inflation report coupled with weaker equity markets could send this market lower. 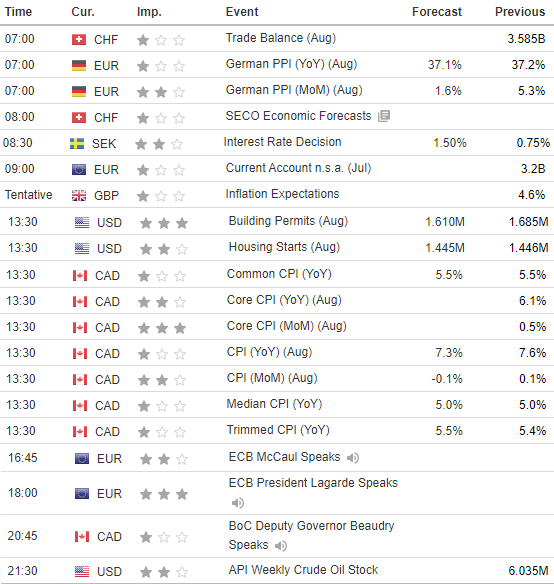