After last week’s big rally around 4%, the EUR/USD has hit a key long-term resistance range near 1.0350 as investors re-focus their attention on Europe’s economic woes and the still very large disparity between the US and Eurozone monetary policies. It is not just the EUR/USD starting the week on the back foot. It looks like the dollar is bouncing back on the comments made by Federal Reserve Governor Christopher Waller, who said “we’ve still got a ways to go” before pausing interest rates. The news has weighed on gold and US index futures and lifted the USD/JPY about 200 pips off its lows from Friday.

Waller: Hikes not pausing in the next meeting or two

The dollar bulls were relieved to hear the Fed governor outlining the case for further rate hikes, after a bruising last week for the reserve currency when it fell for a fourth straight week in its worst performance since 2020.

Waller said: “These rates are going to stay -- keep going up -- and they’re going to stay high for a while until we see this inflation get down closer to our target…We’ve still got a ways to go. This isn’t ending in the next meeting or two.”

There was good news from the Eurozone as industrial production came in better than expected this morning (rising 0.9% m/m vs. 0.1% eyed with the previous reading also being revised up to 2.0% from 1.5%), although this was not enough to lift the euro. A large number of analysts feel the Eurozone is not yet at the point where we can be confident of a strong recovery. This is because businesses continue to report falling new orders as demand is fading amid soaring prices, which is choking the Eurozone economic activity. CPI reached a new record high of 10.7% in October, and although it could start heading lower from here, this will hurt consumers further. The European Commission now thinks Eurozone inflation will average 8.5% this year and 6.1% in 2023, both sharply higher than the predictions made in July.

“Amid elevated uncertainty, high energy price pressures, erosion of households’ purchasing power, a weaker external environment and tighter financing conditions are expected to tip the EU, the euro area and most member states into recession,” the Commission said.

The EUR/USD has tested its next hurdle around 1.0340, the 2017 low, and it has unsurprisingly sold off from there after a big upward move last week that caused prices to become “overbought” in the short-term outlook. The next level of support is now seen around 1.0200; lose this and a retest of the breakout area around 1.0090 would be exposed for a re-test from above. 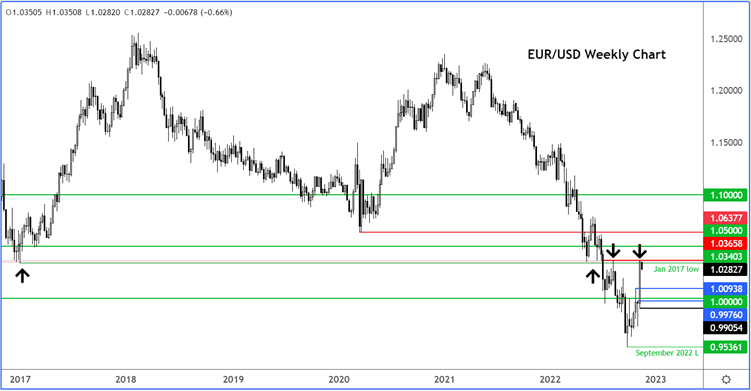