EUR/USD rebounds ahead of US retail sales

The EUR/USD rebounded in the first half of today’s session. This was presumably due to panic subsiding over the rocket that struck inside the Polish border. But persisting macro worries over the Eurozone should mean limited further upside for the single currency going forward. The US dollar meanwhile will be in focus ahead of US retail sales data at 13:30 GMT (08:30 ET). But with the EUR/USD testing its technically important 200-day average at just shy of 1.0450, there is the possibility we might see a retreat in the popular ccy pair in the coming days.

US retail sales expected to rise

US retail sales are seen rising 1.0% month-over-month on the headline front and 0.5% on the core front. Forecasts by economists and researchers of major banks suggest spending was likely boosted by a significant increase in auto sales. If the data, especially core sales, come in better than forecast, this will put talks of a recession in the backburner for a while. It may give the dollar a boost.

The greenback fell sharply last week after a weaker-than-expected CPI report increased calls for a sooner-than-expected pause in the hiking and thus a lower terminal interest rate. We have subsequently seen a weaker PPI report, further fuelling those expectations.

The US dollar has shown some signs of life against some currencies, but so far there are no concrete signs of a bullish reversal yet.

The dollar’s reluctance to extend its sell-off from last week in a meaningful way suggests the market is now looking for the Fed to do the walking, having done some (dovish) talking. While the softer CPI and PPI data have raised speculation about the Fed pivoting to a more dovish stance, the fact that other central banks are likely to follow the footsteps of the Fed means the dollar will still hold some interest rate advantage over her rivals. It is also very important not to get carried away by one month’s worth of data. Despite coming down, inflation is still very high above the Fed’s target, and the central bank is not going to stop raising rates just yet. Indeed, that’s what the Fed’ George has said – that the central bank should continue hiking but slow the pace down.

Eurozone woes could hold euro back

In the Eurozone, investors remain concerned about the health of the economy, where high inflation and low economic growth continue to pose great risk to the outlook. Judging by what some of the ECB’s governing council members have been saying of late, the case for less aggressive approach to tightening policy is gaining ground because of the looming recession – although they still hold that the central bank must prioritise fight against high inflation.

So, the greenback could easily come back after such a strong downward move, and this may undermine the EUR/USD after its strong performances in recent days. 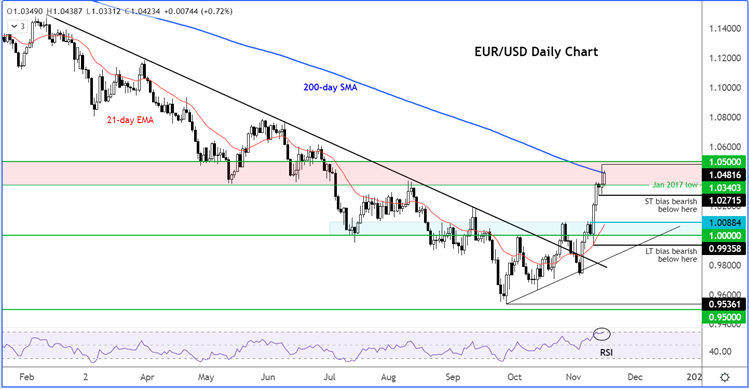 The EUR/USD, which broke the latest hurdle around 1.0340, the 2017 low, remains supported for now. It is however testing the 200-day moving average at 1.0430ish. From there, it wouldn’t surprise me to retreat at least a little after a big upward move from last week causing prices to become “overbought” in the short-term outlook. See the Relative Strength Index (RSI) in the sub chart. Support at around that 1.0340 area now needs to hold if the bulls are to remain in control. However, if that doesn’t happen and we break Monday’s low at 1.0270 then this will tip the balance back in the bears’ favour.