News that the UK economy grew 0.5 per cent in the fourth quarter of last year was largely expected. However, the pound still jumped on relief growth was not weaker and the fact that it was driven almost entirely by the dominant services sector. Not that this was unexpected, but economic growth on an annualised basis was noticeably lower at 2.2% compared to 2.9% in 2014; this was the weakest rate in three years. But it is not all doom and gloom here as economic growth is still among the strongest when compared to other developed nations. Despite the relatively stronger performance of the UK economy, the Bank of England appears to be in no rush to raise interest rates however. In addition to subdued price pressures, Mark Carney and company are worried about the impact of slowing global economic growth on the UK.

In the US, the Federal Reserve is also getting worried about the global economic and financial developments, though it is still upbeat about the world’s largest economy. In reaction to the Fed’s latest choice of words, the dollar bulls to huffed and puffed but they were ultimately beaten by the bears as the currency fell against a basket of foreign currencies last night. Clearly speculators are now betting against a March rate hike and are not too confident about June either. These expectations will undoubtedly change closer to the time of the next Fed meetings depending on the incoming data releases and financial markets. Today’s key US numbers include durable goods orders and weekly unemployment claims. They are not going to be game changers by any means but claims in particular should be watched closely for they have been ticking higher in recent weeks. This week’s key US data will be Friday’s fourth quarter GDP release.

Despite the above-mentioned concerns, the Fed remains the only hawkish major central bank out there. For that reason, we remain bearish on the GBP/USD from a fundamental point of view. In the short-term however, the Cable may be able to regain its poise because the short-term charts of the GBP/USD clearly point to a bit of indecision around these levels. As an example the 4-hour chart, below, shows that the Cable has established a short-term bullish trend after forming a few higher lows. Price had already broken above a short-term bearish trend line and also the 50-period moving average. The latter has offered some support today around 1.4240, which is where the moving average comes into play. For as long as the GBP/USD remains above here then there is a chance for a potential rally of some sort.

But for that to happen the bulls will need to see a break of the key short-term resistance around the 1.4350/60 area soon. In other words, the GBP/USD is currently (i.e. at the time of this writing) in no man’s land. Thus, a move outside of the 1.4240-1.4360 range could lead to a sharp move in the direction of the break. For the bears, the next key target could be at 1.4100, followed by the psychologically-important 1.4000 handle.  The bulls meanwhile may aim for the previous key support and 2015 low at 1.4565. To get anywhere near this target, they will have to take out that aforementioned resistance area at 1.4350/60 first, which has proved to be a tough nut to crack. 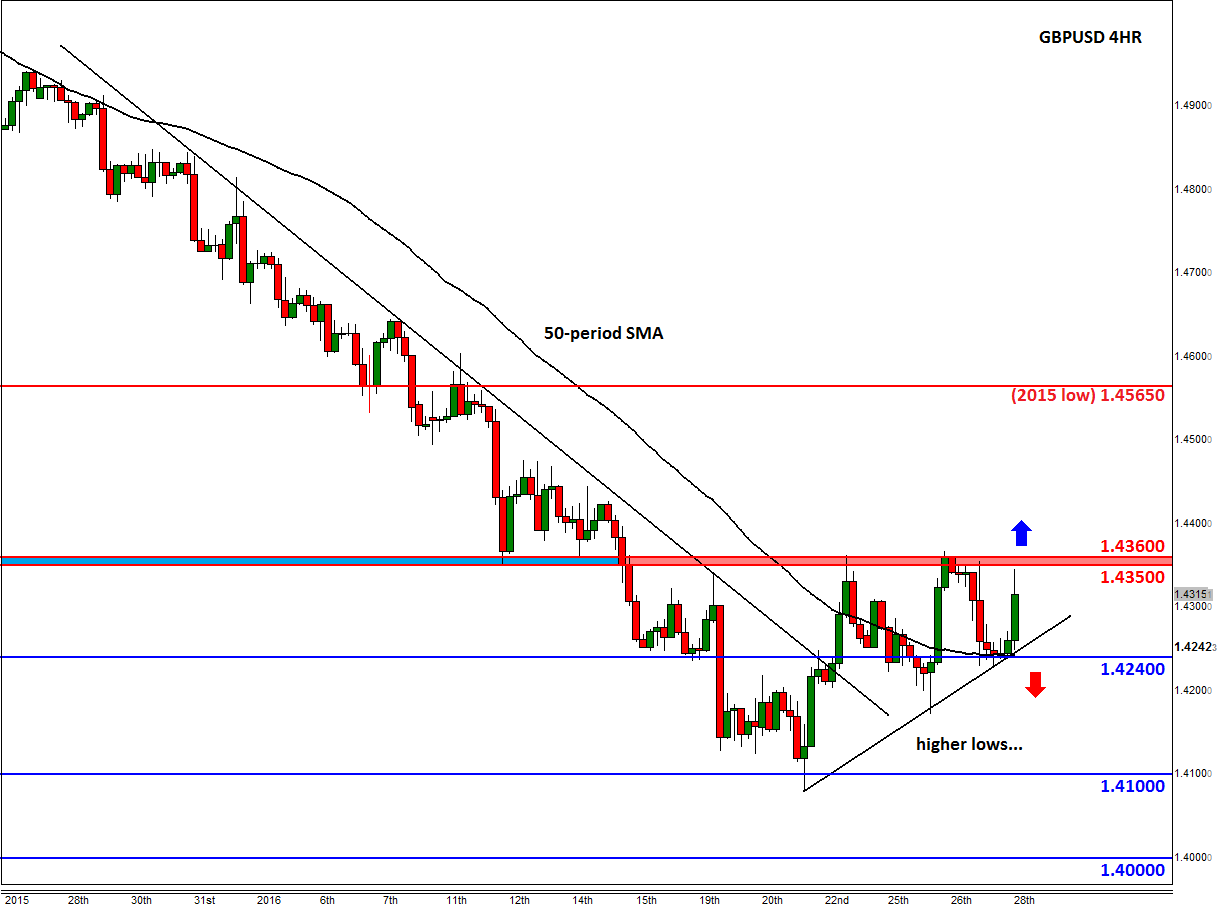