On a daily timeframe of German Bund yields, rates have been moving higher since mid-February, unlike that of the US 10-year yields which have been moving higher since reaching pandemic lows in March 2020. It took bunds until January 31st, 2022 to rise above the 0.00% level.  Since then, the pair has been moving aggressively higher in an orderly, upward sloping channel.  Today, bund yields reached a high of 1.368%, the highest level since the Spring of 2014!  Yields have also recently crossed above the 127.2% Fibonacci extension from the highs of February 2018 to the spike lows in March 2020.  Resistance above is at 1.440%, which is a gap fill from 2014. Above there is the top trendline of the channel at 1.578% and then the 161.8% Fibonacci extension from the recently mentioned timeframe.  However, notice the RSI is in overbought territory, an indication that yields may be ready for a correction (around the ECB meeting?).  If yields do pull back, support is at the May 9th highs at 1.189%, then the bottom trendline of the channel near 1.061%.  Below there, yields can fall to prior resistance at the February 2018 highs of 0.81%. 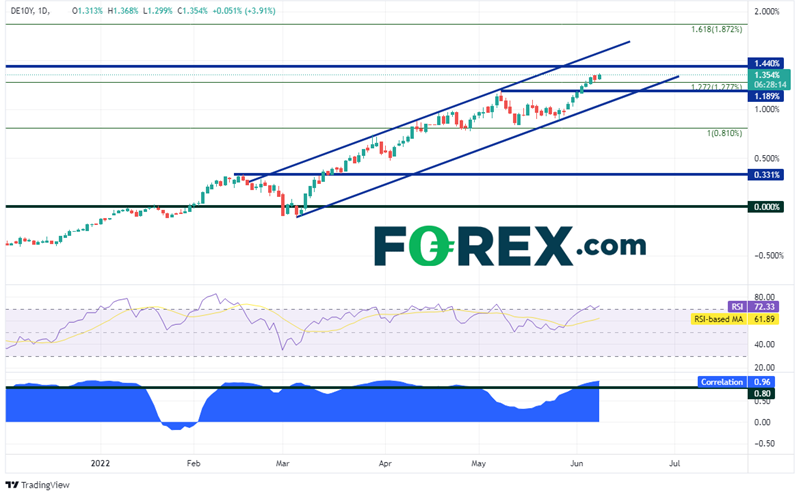 Notice in the bottom panel of the chart above that the correlation coefficient between German 10-Year Bund yields and EUR/JPY is +0.96.  A reading of +1.00 means that there is a prefect correlation and that the 2 assets move together 100% of the time.  A reading of +0.96 is pretty close.

EUR/JPY has been on the move higher as well.  Today the pair reached its highest level since January 2015 and is approaching the first resistance level at the 161.8% Fibonacci extension from the highs of April 21st to the low of May 12th, near 144.54.  Today is also the 10th consecutive day EUR/JPY has moved higher.  The next level of horizontal resistance sits just above, at the lows of December 2014 at 144.76. As with the Bund yields, the RSI is in overbought territory.  However, with the pair moving parabolic, one should not rely too heavily on this indicator because it could just keep moving higher. First support is at today’s low of 141.83.  Below there, EUR/JPY could fall to the highs of June 2015 at 141.05 and then the previous recent highs at 140.00. 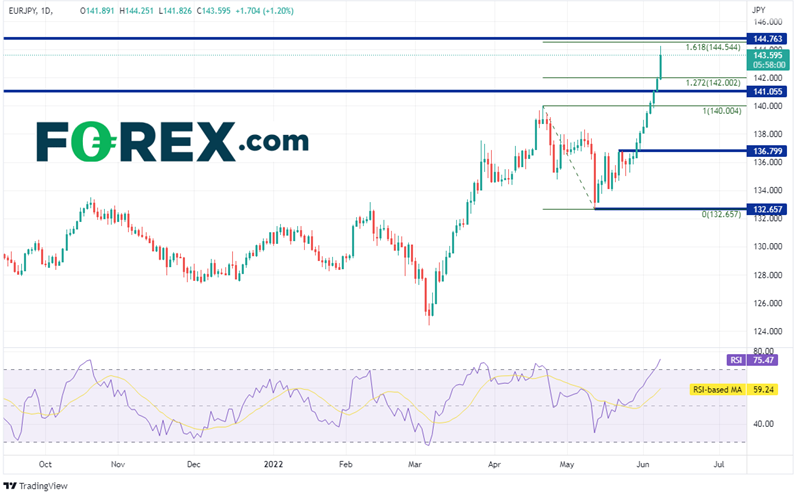 German bund yields have been moving aggressively higher over the past few months. EUR/JPY may have caught on late, but it is moving higher with them in parabolic fashion.  Will both instruments continue to move higher?  It may depenhttp:d on the outcome of tomorrow’s ECB meeting!