Unlike the major indices, gold was unsuccessful in trying to find dip buyers on Wednesday, a day after everything sold off in response to that hotter-than-expected US inflation report. That CPI report reinforced expectations that the Fed is going to raise rates by at least 75 basis points next week and proceed with further aggressive hikes until inflation comes back under control. Consequently, the sellers have stepped up the pressure, driving the precious metal below $1700 again. It looks like a new low for the year is almost imminent for gold. But the question is what will happen next. Are we going to see continued weakness, or will the metal finally find some love in the near future?

The biggest reason why gold should have risen was the sky-high inflation across the world. Yet, it has proved to be a poor hedge against rising prices, with investors disliking the metal because of rising bond yields and a very strong US dollar. In an environment of rising interest rates around the world, investors have instead chosen to sell assets that have little or no yield, such as low-div stocks and metals. The latter also costs money to store, making it even less appealing from an investment point of view in the current climate.

Going forward, it is all about when the interest rate hikes are fully priced. Until this happens, it is unlikely that gold will be able to shine very brightly. How quick the markets will price in rate hikes depends pretty much on incoming data, especially inflation figures. On Tuesday, we found out that US inflation remained hotter than expected and this led to a quick repricing of even aggressive interest rate hikes from the Fed.

The US dollar and bond yields thus remain supportive for now until there’s evidence of inflation coming down sharply. Perhaps prices could come down in the event of a sharp economic downturn, causing demand to weaken. For that reason, other macroeconomic pointers will also be important to watch closely. In a way, bad news might actually be good news for stocks and gold as investors might interpret that as reasons why inflation might fall back and hasten the potential interest rate cuts from the Fed to support an ailing economy.

This is precisely why the dollar weakened a little and stocks rose last week, but as we have seen on several occasions, inflation data and the Fed have repeatedly delivered hawkish surprises. So, don’t read too much into any odd weakness in non-inflation data, such as the ones that are due for release later on today - namely, retail sales, industrial production, Empire Manufacturing, and the Philadelphia Fed Business Outlook. 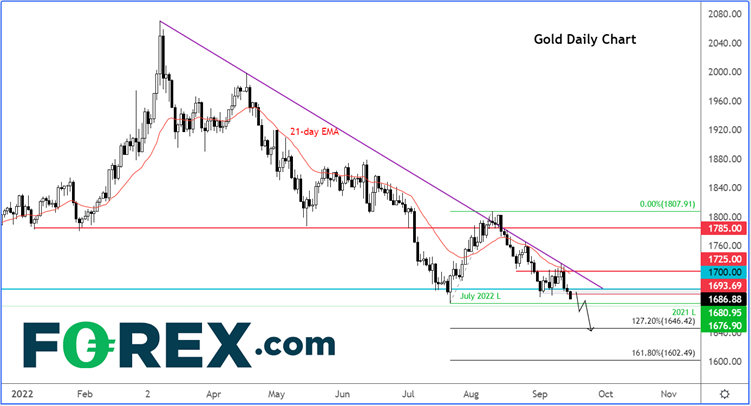 From a purely technical perspective, there’s little to no reason to be bullish on gold right now as prices continue to break support after support. The breakdown means the path of least resistance is to the downside and a drop to a new low on the year looks increasingly likely. It looks like the bears might be targeting the presumably big pool of liquidity resting below $1676, last year’s low. Undoubtedly, that’s precisely where many trapped long traders’ stop loss orders would be resting. Watch out below!