Gold shines even if US stocks defy gravity; Trump in focus

Gold ended its winning streak on Monday as traders eased off the gas ahead of tonight’s much-anticipated speech by US President Donald Trump and this week’s other fundamental events. The precious metal is little-changed so far in today’s session but the lack of any follow-up selling pressure could be a sign for concern for the bears. Indeed, despite this week’s hesitation, gold remains in a strong upward trend and probably in the watch list of many potential buyers. The metal’s recent strength in the face of a generally strong dollar and rapidly rising US equity prices is remarkable and unambiguously bullish. After all, a rising stock market usually suggests investors are seeking racier assets over perceived safe haven gold and silver. But apparently this isn’t the case. So, it does make you wonder what is really going on. Is gold about tank or the stock markets? Of course both could go up together as they have in recent times, but typically they have a negative correlation. Given the almost parabolic-like rally in the US stock markets, I do wonder for how much longer the bulls will be able to sustain this rally. It would not come as a major surprise to me if those who bought stocks in anticipation of Trump’s fiscal plans now take off their positions and thus cause the indices to retreat. But there is no way of knowing this in advance. As far as gold is concerned and given its recent positive relationship with US stock markets, it may not respond to the equity markets in the usual negative way in response to Trump’s speech. But it could nevertheless move sharply if there is a correspondingly big move in the dollar tonight.

Gold is currently stuck in a rather strong bullish trend as characterised by shallow retracements followed by quick trend resumption. Thus, Monday’s retreat from the 200-day moving average, while noticeable, could prove to be another ploy to get the bears trapped before it continues higher. Monday’s pullback occurred after a three-day up move. So it may well have been driven by profit-taking from the bulls rather than short selling from the bears. Whatever the reason, until and unless there is a break in market structure of higher highs and higher lows, there is little reason to feel bearish on gold. Either that or if we see some bearish price action beforehand. Consequently, I am expecting the last resistance area of around $1240-44 to now turn into support, should gold get there. As things stand only a break below the last significant low at $1231.50 would render my bullish view invalid.

Now, there is a possibility that we may see more decisive bearish price action around some important levels that are fast approaching. At this stage, though, it is impossible to predict what kind of a reaction, if any, we will get should gold get to those levels. In any case, it is always worth noting them in advance in case we do see a trend reversal. As per the chart, $1269 was the last support level prior to the breakdown. Once support, this level could turn into resistance upon re-test. Slightly higher, around the $1275-85 area, is the convergence of the bearish trend line with the 61.8% Fibonacci retracement level against last year’s high. What gold may do next will depend, in part, by price action there: a sharp rejection could see it pull back in a meaningful way, otherwise it will be a case of onwards and upwards. 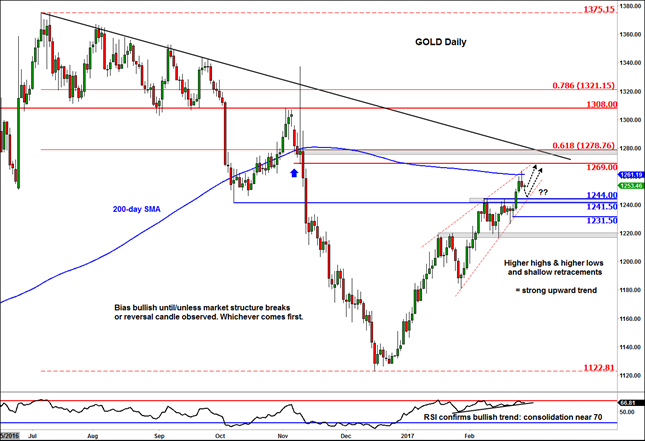