The National Bank of Hungary (NBH) hiked interest rates by 100bps to 10.75% earlier today as inflation continues to rise.  This is the highest-level rates have been since late 2008 and comes just 2 weeks after the central bank hiked rates by 200bps to bring them to 9.75%!  The NBH cited increased inflation and vowed to continue to increase rates until it can stop inflation from rising.  June’s CPI reading was 11.7% YoY vs 10.7% YoY in June, a 23-year high.  Just 1 year ago the key inflation reading was only at 4.6% YoY! Deputy Governor Virag noted that the global recession risks have increased, but they can assess the pace and size of the slowdown over the coming month.

The Hungarian forint began to move aggressively higher just days before the Russian invasion of Ukraine.  EUR/HUF was at 352.887 on February 11th and by March 7th, the pair reached a new all-time high of 392.729. However, by the end of Q1, EUR/HUF had pulled back to 366.764.  Since then, it has been off to the races with the currency pair trading higher in an orderly pattern to a new all-time high of 416.856 on July 6th.   Notice that three times near the end of the price rise that EUR/HUF tried to push above the top trendline of the rising channel, only to close back inside each time.  As is often the case, when price fails to break through one side of a pattern, it often moves to test the other side of the pattern.  EUR/HUF broke below the bottom trendline of the channel in July 19th, near 400, and has been trading below it since.  Notice that price held above support at the 38.2% Fibonacci retracement level from the lows of March 31st to the highs of July 6th, near 397.721. 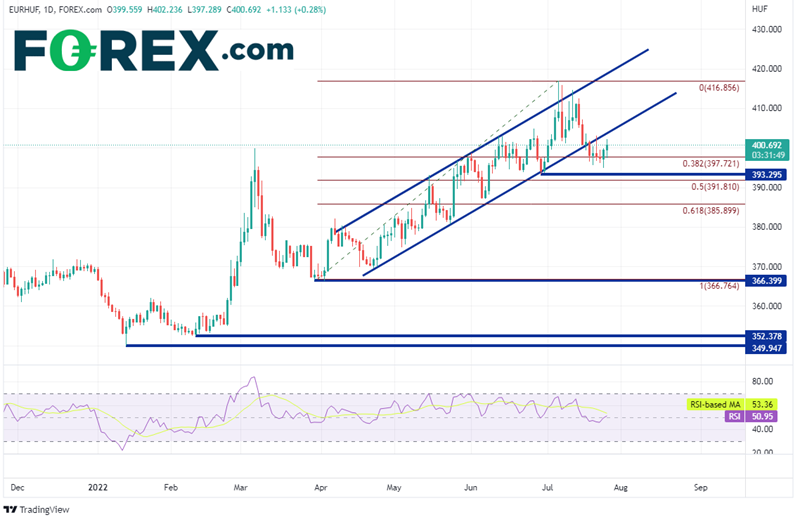 On  a 240-minute timeframe, EUR/HUF traded as low at 394.841 before bouncing.  If the Hungarian forint remains weak, EUR/HUF should move higher.  First resistance is at the 38.2% Fibonacci retracement level from the highs of July 6th to the lows of July 25th at 403.251.  Just above there is a confluence of resistance at prior lows and the bottom, downward sloping trendline near 404.80.  The next level of resistance is at the 50% retracement of the previously mentioned timeframe near 405.849.  However, if resistance holds and EUR/HUF continues lower, the first support level is at the July 25th lows of 394.841.  Below there, price can fall to horizontal support at 393.295, then the 50% retracement level from the lows of lows of March 31st to the highs of July 6th, near 391.81. 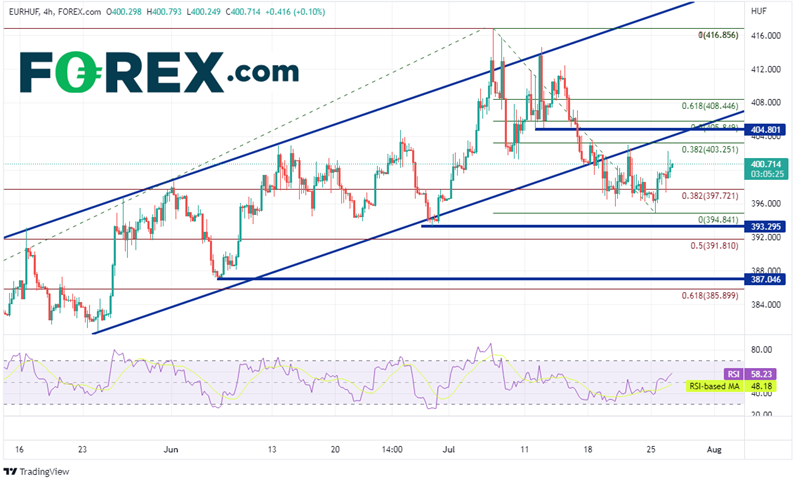 Inflation is rising rapidly in Hungary and the National Bank of Hungary is doing its best to keep up.  The central bank doesn’t meet again until August 30th.  One thing the rising inflation doesn’t seem to be impacting is the level of the forint as it continues to weaken vs the Euro.  If EUR/HUF can hold the 38.2% Fibonacci retracement level, the pair may move up to retest the July 6th highs near 416.856.