Major central banks around the world have been hiking rates at an unprecedented pace in order to try and cap inflation, which in some countries is at or near 40-year highs.  However, the question remains as to when they will stop hiking rates and what the terminal rates will be.  The chart below shows where some of the major central banks currently have rates set, as well as, where the market expects rates to be 1-year from now. For your guide, these rates are all higher than the implied policy rates 2-years from now.  This means that markets are expecting central banks to lower rates after peaking in 1-year. 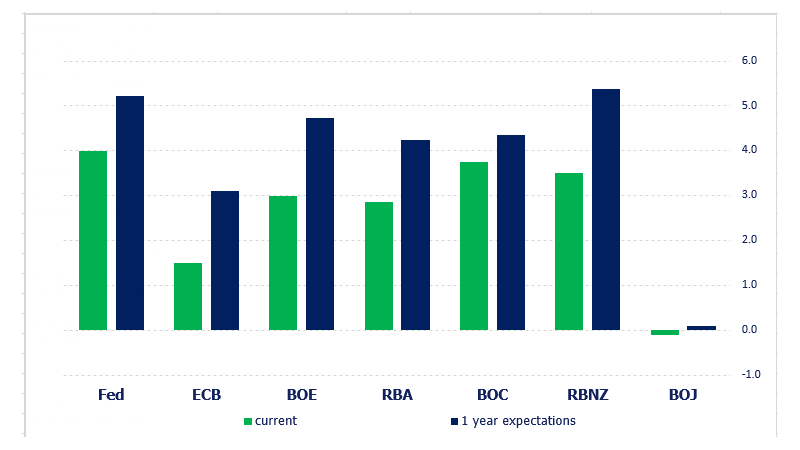 The US Federal Reserve currently has the Fed Funds rate set at 4.00%.  Expectations are that the Fed will raise rates within 1-year to 5.22%.  The Fed has raised rates by 75bps at the last 4 meetings in a row!  Markets are now questioning whether the Fed will slow the pace of rates hikes at the December meeting.  The statement read that “in determining the pace of rate hikes, we will consider cumulative tightening , policy lags, and economic and financial developments”.  In the press conference which followed, Fed Chairman Powell noted that the terminal rate matters more than the pace of tightening, however, the Committee hasn’t even begun to think about stopping its rate hikes.  The FOMC meets again on December 14th.

The European Central Bank currently has rates set at 1.50%, up from a pandemic low of -0.50%.  Expectations are that the ECB will raise rates within 1-year to 3.11%. The ECB raised rates by 75bps at its last meeting, bringing the deposit rate to its highest level since 2009.  The central bank said that it expects to raise rates further based on increases in inflation and the evolving economy.  In addition, ECB members have been out in force lately, including ECB President Christine Lagarde, discussing how inflation is much too high and rates need to be raised further.  The latest inflation reading was 10.7%.  The ECB meets again on December 15th.

The Bank of England currently has rates set at 3.00% after the BOE raised rates by 75bps at its last meeting.  Expectations are that the BOE will raise rates to 4.74% within 1-year.  However, after the November BOE meeting, the Committee was quick to point out that peak interest rates are likely to be lower than was implied by the markets.  In addition, the Committee noted that if the market follows its current market curve, the UK could be in a recession for the next 2 years, beginning with Q3 2022 (results are due out November 11th).  Note that the UK’s latest inflation reading was 10.1%.  The Bank of England meets again on December 15th.

The Reserve Bank of Australia currently has rates set at 2.85% after the RBA raised rates by 25bps at its latest meeting.  This was the second 25bps increase in a row, though the Committee said that it expects to continue to increase rates.  The 1-year outlook for rates is 4.24%, meaning that if the RBA wants to continue to hike rates by 25bps, it will have to do so 6 more times during the next year.  On November 4th, the Monetary Policy Statement showed that the Committee upgraded its inflation outlook to 6.5% (for trimmed mean inflation, the preferred measure). And, as recently as November 9th, RBA’s Bullock reiterated that further hikes will be needed as wage growth was a bit stronger than 3 months ago.  The RBA meets again on Tuesday, December 5th.

The Bank of Canada currently has overnight rates as 3.75%.  The 1-year expectation for rates is only 4.35%, a mere 60bps above the current level.  The BOC surprised markets at its last meeting as by “only” hiking rates by 50bps vs an expectation of a 75bps rate hike.  As with other central banks, the BOC has said that it intends to raise rates further in order to curb inflation as the committee’s preferred measure of inflation (core CPI ) hasn’t showed signs of easing. October’s jobs report was +108,300 vs an expectation of only +10,000.  This should give the BOC confidence to hike rates further.  The Bank of Canada meets again on December 7th.

The Reserve Bank of New Zealand currently has rates set at 3.50% after hiking its official cash rate by 50bps at its last meeting, however a 75bps rate hike was discussed. As the RBNZ seems to be the next hawkish central bank after the Fed, its 1-year inflation outlook is high at 5.37%. The Committee noted that more rate hikes are ahead, however also took into consideration that there is a lag in the monetary policy transmission.  Will the next rate hike be 50bps or 75bps?  The RBNZ meets again on November 23rd.

The Bank of Japan has been steadfast in holding interest rates at -0.1, where they have been since early 2016.  The Central Bank also left the cap on the 10-year JGB at 0.25%.  However, inflation has been rising and its last reading was 3%!  Therefore, markets are expecting the BOJ to do “something” over the next year.  Therefore, the 1-year implied inflation outlook is +0.10%.  Despite the increase in inflation, the BOJ has maintained that current inflation is due to energy and fresh food, and therefore, will take extra easing measures if needed.  It will also continue to buy bonds against the 0.25% 10-year bond cap.  The Bank of Japan doesn’t meet again until December 20th.