Mexico released its mid-month inflation report for August earlier today and inflation rates continue to rise.  The headline print was 8.62% YoY vs an expectation of 8.52% YoY and a reading of 8.16% YoY in July.  This was the highest inflation reading for Mexico since the early 2000s.  In addition, the mid-month Core Inflation Rate for August was 7.97% YoY vs 7.8% YoY expected and a July reading of 7.56% YoY.  This was the highest reading since December 2000.  The Central Bank of Mexico (Banxico) targets 3% inflation.  Recall that at the last Interest Rate Decision meeting, the Central Bank hiked rates by 75bps to bring the key rate to 8.5%, citing ongoing inflationary pressures. In addition, the Banxico revised its inflationary outlook higher to Q3 2023 but said it expects inflation to converge at its 3% target by Q1 2024. And, as with most central banks as of late, Banxico has said that it will move to make decisions for its next rate decision based on incoming data and did not provide forward guidance for its next rate move.

On a daily timeframe, USD/MXN has been making lower highs since April 3rd, 2020, during the height of the pandemic when the pair traded as highs as 25.0457.  However, the pair has formed as strong support zone between 19.5491 and 19.7063.  Throughout 2022, USD/MXN has been moving is a downward sloping channel.  On May 30th, the pair tested the bottom of the support zone, making a new low at 19.4136, however price held the bottom trendline of the channel.  As often is the case, when price fails to breakout through one side of the pattern, it often moves to test the other side of the pattern.  USD/MXN bounced above the top trendline to the 61.8% Fibonacci retracement level from the highs of November 25th, 2021 to the lows of May 30th at 21.1079, however the move failed and price moved back into the channel. 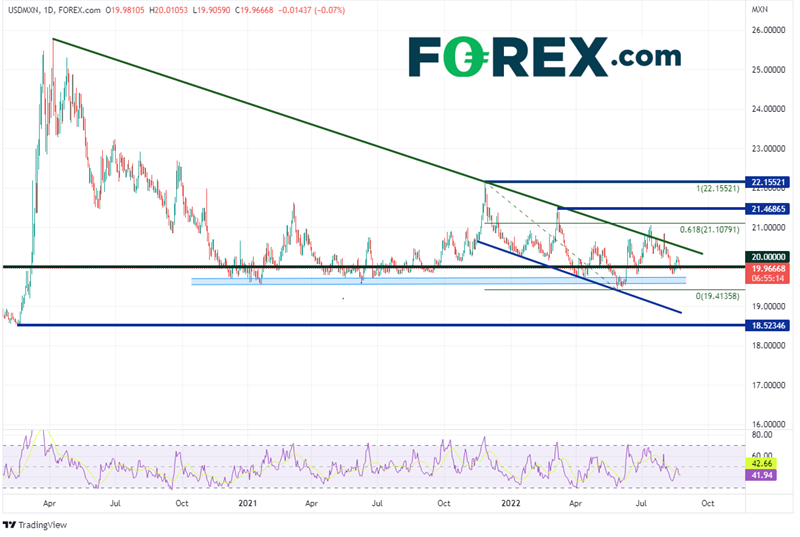 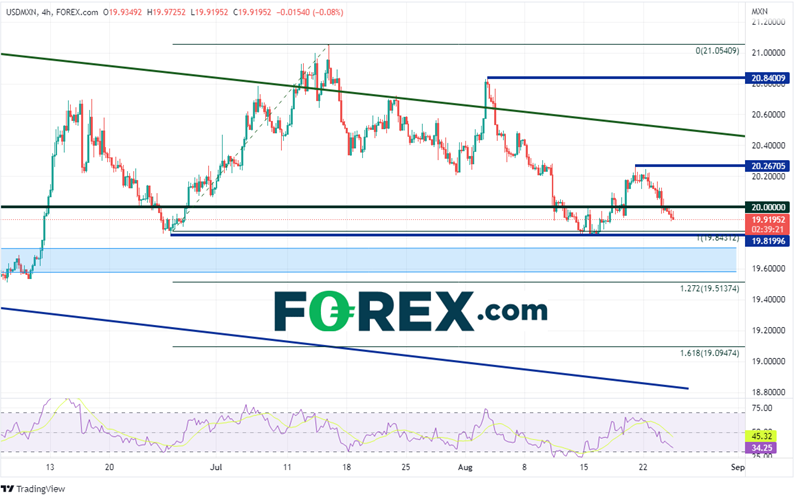 Mexico’s mid-month inflation rate hit a new high for the cycle today at 8.62%, which is helping push USD/MXN lower today towards prior support.   Will inflation continue to move higher?  It may depend on what the Central Bank of Mexico does when it meets again at the end of September!