Michigan Consumer Sentiment data as expected. The table is set for the FOMC!

Yesterday we pondered what could happen if the Michigan Consumer Sentiment Index inflation expectations components came out higher than expected.  Would the Fed again leak a headline to the Wall Street Journal that it will raise rates more than expected, as it had done during June? Well, the question seems to be mute right now as the data was roughly as expected.  The headline Michigan Consumer Sentiment Preliminary reading for September was 59.5 vs 60 expected and a reading of 58.2 in August.  More importantly, the 1-year Inflation Expectations reading was 4.6% vs 4.7% expected and 4.8% in July.  This was the lowest level since September 2021.  The 5-year Inflation Expectations reading fell to 2.8% vs 2.9% expected and 2.9% prior.  This was the lowest reading since July 2021.  As a result of this data, the FOMC is likely to raise rates by 75bps next week, as expected.

EUR/USD immediately went bid after there release of the print, as fears of a 100bps rate hike next month were diminished. The pair quickly moved towards parity. 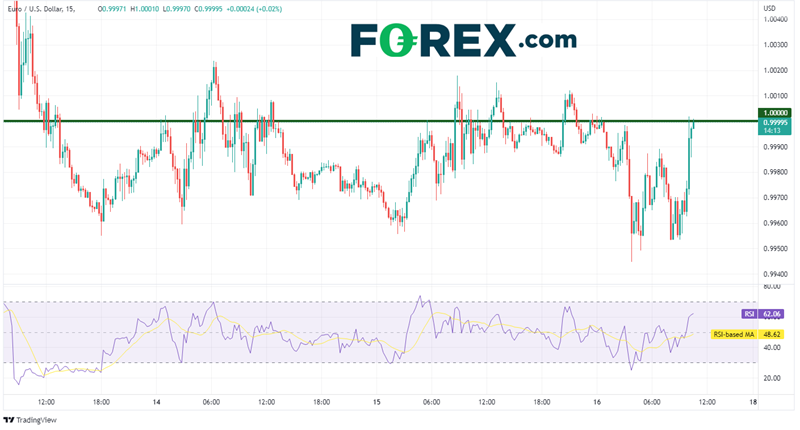 On a daily timeframe, EUR/USD has been trading in a downward sloping channel since making yearly highs on February 10th at 1.1498.  After breaking 1.0000 and testing support at the bottom downward sloping trendline of the channel, EUR/USD bounced to test strong horizontal resistance at the top trendline of the channel near 1.0340.  Since then, the pair has moved lower and made a 20 year low at 0.9864 before bouncing to the 61.8% Fibonacci retracement level from the high of August 10th to the lows of September 6th, near 1.0176 (this was also the top trendline of the channel once again).  Price then pulled back to parity on September 13th and has been oscillating around it since. 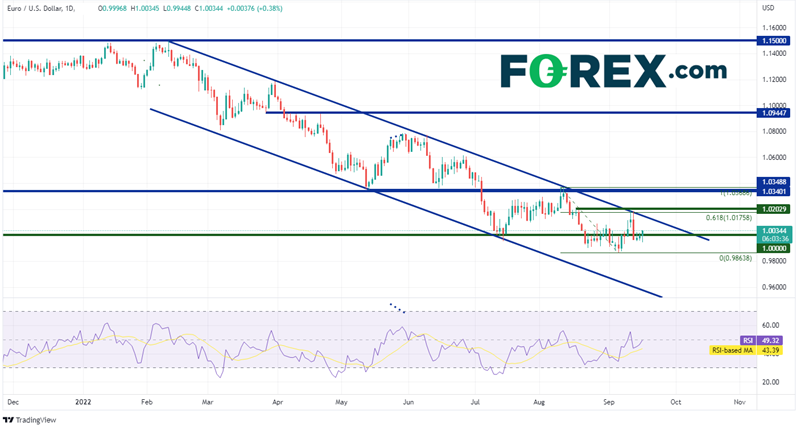 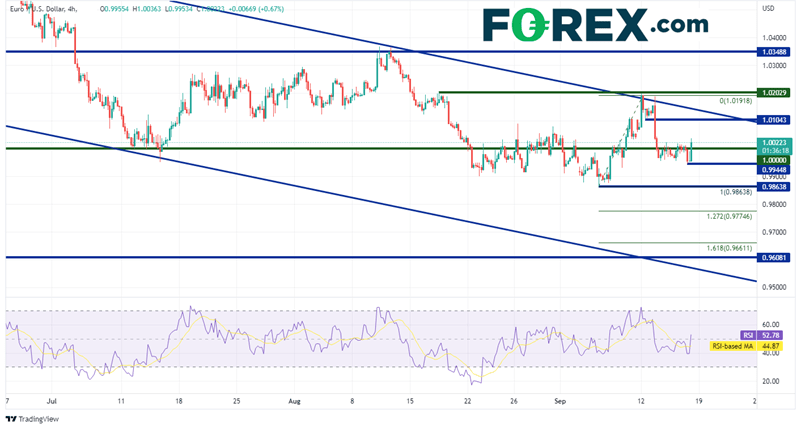 The FOMC meets on Wednesday this week and is likely to lift the Fed Funds rate by 75bps from 2.5% to 3.25%.  Prior to today’s Michigan Consumer Sentiment data, markets expected there to be a higher chance that the Fed would hike 100bps.  However, after seeing today’s inflation components of the data, that chance has fallen to only 16%.