Sentiment towards equities remains negative. And not just equities. You can add bonds, cryptos, metals and foreign currencies in that list. There was a bit of optimism when European governments announced various stimulus measures to help with the soaring cost of energy. But investors quickly realised that all that does is add to inflationary pressures which central banks are desperately trying to fight. Investors appear reluctant to buy anything in this macro environment, where inflation is soaring, global growth is weakening, and central banks are tightening. Something must fundamentally change before we see the onset of a serious recovery.

Meanwhile, we had more weakness in Chinese data, this time trade figures, underscoring the view that the world’s second largest economy is weaking more than expected. Both exports and imports were well short of expectations, pointing to weakening domestic and foreign demand.

In the US, the latest ISM services data suggested the economy is still strong enough to warrant more aggressive hikes.

Indeed, it is the Fed continuing to press ahead with its aggressive rate hikes, which is providing te main source of pressure on global risk assets. Bets that the Fed would deliver a hattrick of rate increases in September rose sharply after the Fed Chair Jerome Powell spoke at the Jackson Hole Symposium a couple of weeks ago. Hawkish rhetoric from the ECB has also increased as Europe struggles with an energy crunch and record inflation. In August, Eurozone inflation hit a record 9.1% and Germany saw its inflation rise to its highest level in more than 40 years. Several ECB policymakers have called for the central bank to up the pace of its rate increases from an initial 50 basis point rise in July to a three-quarter point increase at tomorrow’s meeting.

Also not helping is the fact we are in a bear market, where traders are happy to sell into the rallies than buy the dips.

Following Tuesday’s selling, the Nasdaq closed below the 61.8% Fibonacci retracement against the rally that started in June. Support around 12050 was also broken. The path of least resistance thus remains to the downside. 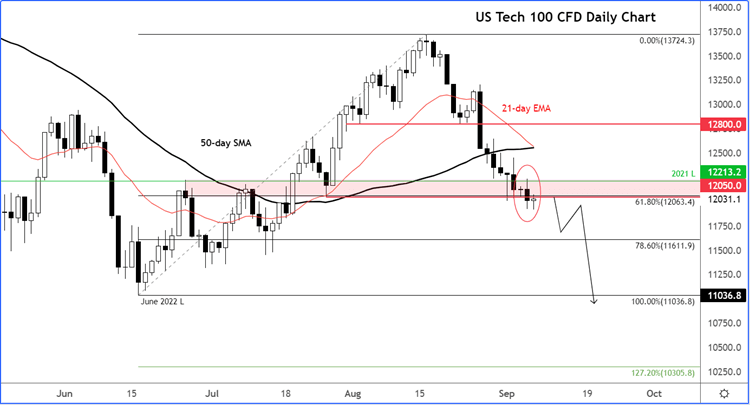 From here, we could see the Nasdaq start to break below the 12K mark and descend towards 11610, the 78.6% Fibonacci level. While we are a fair bit away from the June low (11036), I wouldn’t rule out the possibility that we might revisit that level in the next couple of weeks.

At this stage, there are not many technical or indeed fundamental signs to appease the bulls. So, expect more losses for equity markets.