Nasdaq may struggle to hold rebound after poor tech results

US index futures managed to rebound after Apple bucked the trend of weak tech results, while the Dow was supported by Exxon results. As a result, the Dow opened higher while the S&P and Nasdaq both made up ground to open near unchanged. That said, it has been a week of mostly disappointing results from US tech giants, putting significant pressure on the Nasdaq. Following Thursday’s sell-off, Nasdaq futures fell further in the aftermath of Amazon’s result, before bouncing sharply. But there’s a good chance the tech-heavy index could fall again as we head towards the end of the week. This is especially the case in light of tumbling Chinese equities, rebounding US bond yields, and of course not to mention the fact that sentiment towards US equities remain largely negative because of those poor results.

Indeed, cracks have started to re-appear in the stock markets this week, after the recent recovery. Worries over stagflation, China’s ailing economy and more rate increases, as well as disappointing US tech earnings, are among the reasons keeping stock market bulls at bay. The tech sector remains a particular area of concern with Amazon shares dropping after its earnings results disappointed. Facebook parent Meta plunged sharply the day before. Microsoft, Alphabet and Texas Instruments were among the other big fallers, although Apple seems to have bucked the trend with its shares rising in pre-market.

Amazon could not buck poor US tech earnings

Here’s a summary of the big earnings, by my colleague Joshua Warner:

The disappointing tech earnings from Amazon and Facebook-parent Meta Platforms added to those we saw earlier in the week from Alphabet, Microsoft and Texas Instruments.  Meta lost as much as a quarter of its value following its results, causing several investment banks to downgrade the stock.

Sentiment in the sector is understandably negative. Together with Alphabet’s numbers last week, social media companies are clearly having a much tougher time amid softer demand for advertising. This is a reflection of an ailing global economy, hurt badly by rising price levels around the world for both companies and individuals. It is a problem for a lot of companies around the world - something that will undoubtedly be echoed by most other companies that are set to produce their results.

Following the tech results, the Nasdaq has broken out of its bear flag pattern, which is a bearish continuation pattern. This could result in fresh technical selling for as long as the index does not go back and hold above key resistance at 11370.

Key support around 10890 to 11036 area has held firm for now. However, if the index breaks below here then it is probably game over for the bulls. 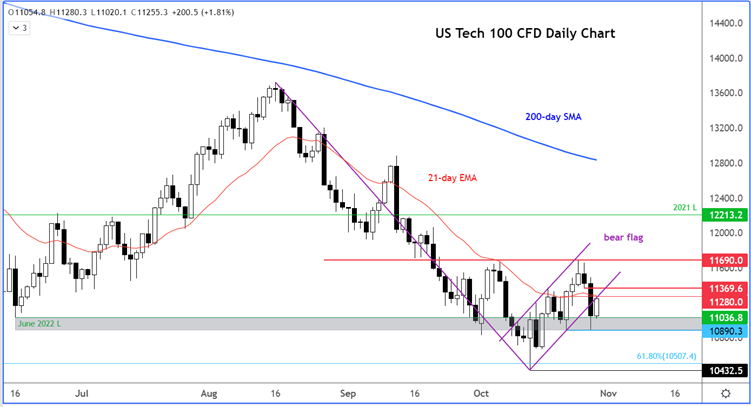