The US Non-Farm Payroll data released this morning showed that 528,000 jobs were added to the economy during July.  This is more than twice the estimate of 250,000.  In addition, June’s print was revised higher from +390,000 to +398,000.  The Unemployment Rate fell from 3.6% in June to 3.5% in July.  Average hourly earnings increased to 0.5% MoM vs 0.3% MoM expected and a higher revised print to 0.4% MoM in July.  The July NFP data should give the Fed confidence to continue with its rate hike cycle, despite lower growth.  Fed Chairman Powell said that he doesn’t believe the US is in a recession, as there are some sectors that are still performing strong, such as the labor market.  The last 2 consecutive quarters showed negative growth, which is the textbook definition of a recession.  However, Powell doesn’t follow the textbook definition and today’s jobs data helps with his thesis.

The US Dollar Index (DXY) took off immediately following the print, as it points to the view that the Fed will continue to hike rates aggressively.  The DXY broke aggressively higher, through the highs of August 3rd at 106.82 after the print was released. 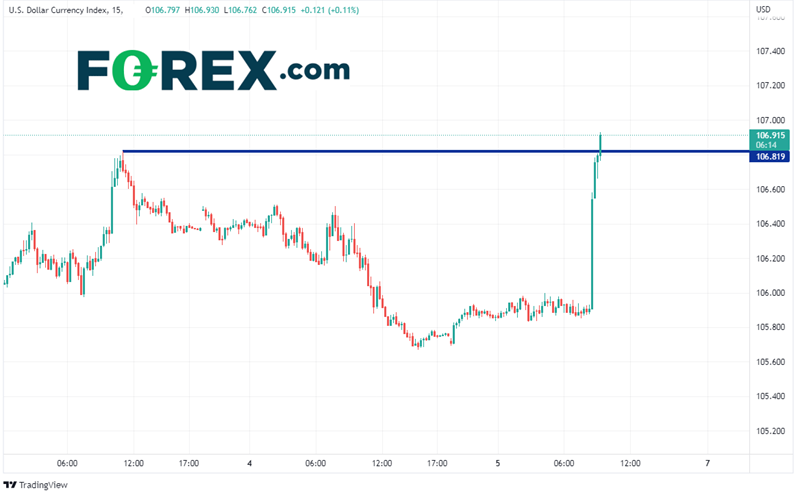 On a daily timeframe, the DXY has been moving higher since May 2021.  After breaking above the channel on April 14th, the Dollar Index moved aggressively higher as it became more apparent that the Fed was going hike rates at a more rapid pace.  The DXY reached a multi-year high on July 14th, then pulled back to the 50% retracement level from the lows of May 30th to the highs of July 14th near 105.30. Currently, price is trading against the bottom side of an upward sloping trendline near 107.00.  If the DXY can move above, the next level of horizontal resistance at 107.48 and then the July 14th highs at 109.29. If price closes above 106.51, today’s candlestick will be a bullish engulfing pattern and a signal that more upside may be ahead. If the resistance holds, the first support is at the lows of August 2nd near 105.05, then horizontal support at 104.79.  Below there, price can fall to the 61.8% Fibonacci retracement level from the previously mentioned timeframe at 104.35. 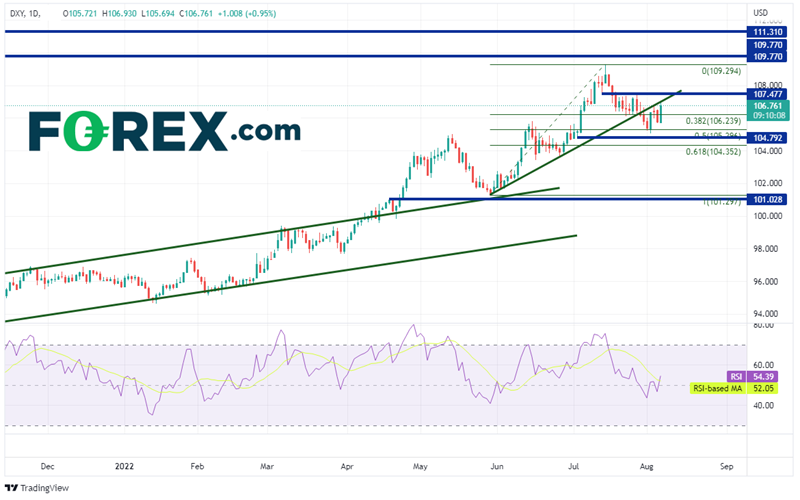 Jobs data is said to be a lagging indicator of the economy.  Some are suggesting that today’s monster print should be ignored.  However, the Fed will see much more jobs related data before the next FOMC meeting in September, including August’s NFP print.  If the print continues to be high, the Fed will feel confident with a decision to hike rates aggressively.  If it is much lower, it may have to think twice about how much it wants to hike.  Regardless, the next FOMC meeting is a ways off. Markets may be getting ahead of themselves!