S&P 500 in bear territory: what now for stocks?

Following the late bounce on Wall Street last night, European markets opened today’s session slightly firmer. Trading has since been very choppy however. Speculators are probably wondering whether a near term bottom has finally been established or if the rebound was a mere short-covering rally as after all we have seen plenty of such rallies already this year. Market participants are also digesting US earnings, with the reporting season being in full swing now. Overall earnings results haven’t been too bad so far, albeit expectations were very low and thus easily beatable. But if the likes of Apple, Amazon and Facebook deliver better results next week then this could provide some short term relief. The direction of crude oil is also likely to remain a big factor for equities, especially resources stocks. Like the equity markets, oil prices bounced off their lows yesterday before falling back after fresh data from industry group the American Petroleum Institute (API) showed US oil inventories increased once again last week, underscoring the on-going oversupply worries.

According to the API, US oil inventories rose by an additional 4.6 million barrels in the week to January 15. This was well above analysts' expectations. The official stocks data from the US Energy Information Administration (EIA) will be released at 16:00 GMT (11:00 ET), a day later than usual due to the Martin Luther King bank holiday on Monday. Oil speculators will remember that the API massively underestimated the EIA data last time when it reported a fall of 3.9 million barrels when in fact crude stocks had increased slightly for that reporting week. So far however, traders are giving the API the benefit of the doubt, with oil prices trading near their recent multi-year lows at the time of this writing. If the EIA confirms the build, or worse, reports a bigger increase then oil prices could fall to fresh lows and take the positively-correlating stock markets lower with them. Conversely, a surprise drawdown should help to support oil and in turn stocks – at least in the near term, anyway.

Meanwhile the European Central Bank is expected to remain on hold today. But as my colleague Matt Weller reported, the tone and comments from Mario Draghi’s press conference could provide a clue about what to expect moving forward. If the ECB President signals that further monetary stimulus is on the way then this may calm the investor anxiety a little, leading to a bounce in stocks and a drop in the euro.

But the stock markets in Europe, the US and Japan have all now entered the official bear market territory after dropping in excess of 20% from their respective record or multi-year highs. On the surface, this bit of information doesn’t really mean much in terms what will happen in the future. However, it will be at the back of people’s minds and may weigh on sentiment. It may therefore stop some investors from buying stocks boldly and/or encourage speculators to sell aggressively into future rallies. So the key point here for traders is that if they are buyers, they would be going against the newly-established bearish trend. Thus even when a clear short-term bottom pattern is emerged, there is no reason to fully expect the markets to rally to fresh all-time or multi-year highs. As such, the buyers will likely take profit quicker than they would have if the underlying medium trend was still bullish. This is why, for example, we sometimes see large rallies within bearish trends which ultimately fail before a fresh wave of selling takes place. The last example of this was at the end of the summer when the Dow and S&P 500 started a strong rally that almost reached their previous peaks before tumbling once more. I am not saying we will see a similar counter-trend rally this time, but the possibility for an unexpectedly sharp rebound is always there, especially from these extremely oversold levels.

In fact, the S&P 500 is again testing a major support area around 1820-30. Although it dipped below this region during the height of yesterday’s selling, the index eventually climbed back to stage a sharp rebound. Undoubtedly, the sellers took profit here, which is why some of the most heavily-shorted stocks led the advance.  Don’t get me wrong, there was probably some opportunistic buying activity going on there, too. Now, what happens next will depend on price action around this 1820-30 region, which marks the neckline of the long-term rounded-top bearish pattern. While the S&P holds above here on a daily closing basis, there is the possibility we will see a rally of some sort, perhaps towards, if not beyond, 1900, and possibly even 2000 (which would also mark the 61.8% Fibonacci retracement level of the downswing from October’s high).

However, a decisive break below 1820 could pave the way for further losses. In this scenario, the S&P could easily drop to its 200-week moving average, around 1781, or even the long-term bullish trend going back to the March 2009 low, around the 1750/7 area. But potentially, there is a danger that this bullish trend line would also break down and clear the way for a drop all the way to 1575/6, the 2007 peak and 38.2% Fibonacci retracement of the entire 2009-2015 upswing.

In short, there is the possibility for a sharp rebound here, but if the buyers lose ground at 1820/30 then expect to see some further big falls. Conservative traders may therefore want to wait for the markets to make their moves before deciding on which side to be on. Ultimately the near-term trend is bearish, so expect the rallies to be short-lived. 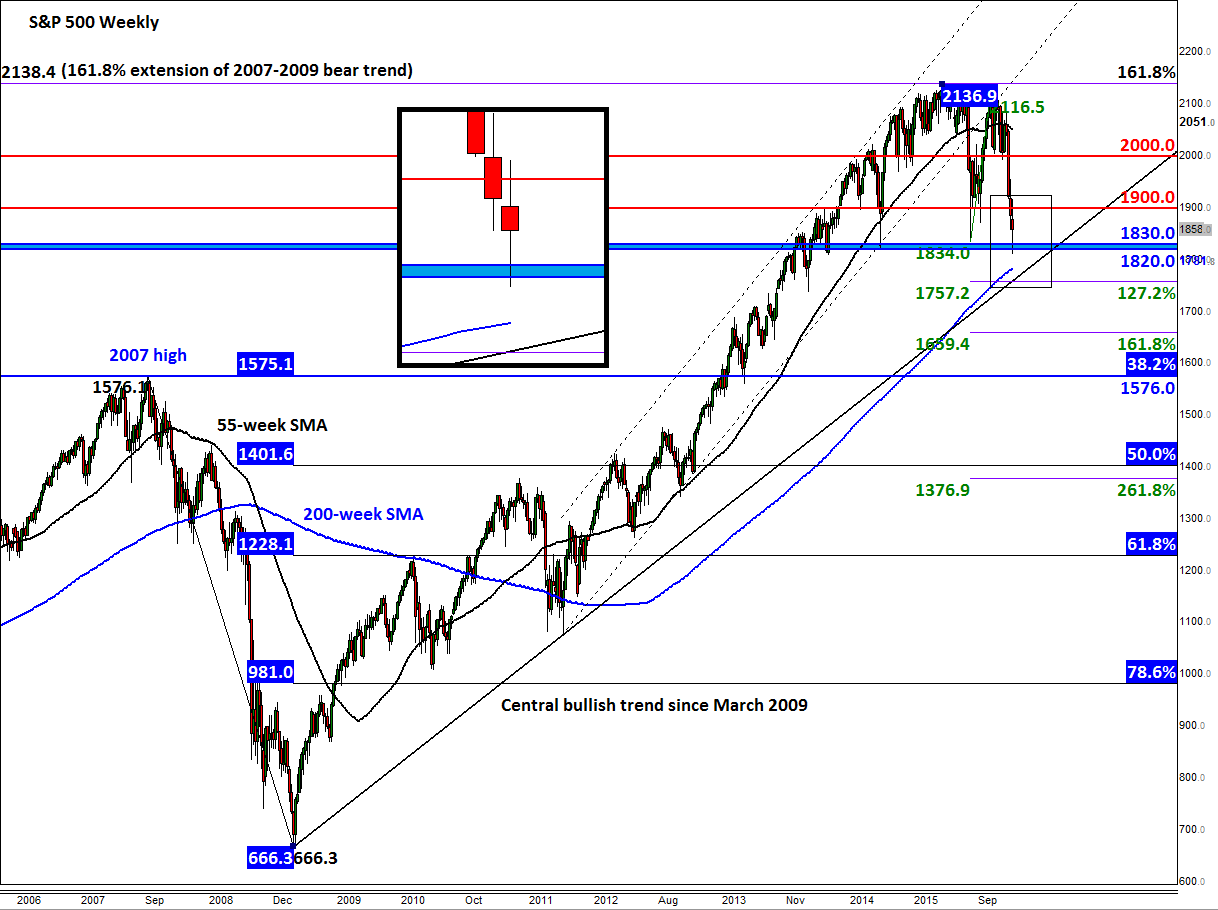