Amid the flurry of central banks meetings earlier today, the Swiss National Bank hiked rates by 75bps!  The SNB brought borrowing costs above 0% for the first time since 2011!  Rates now sit at 0.50% after lifting them from -0.25%   This leaves the Bank of Japan as the only major central bank to have its key rate in negative territory (-0.10%).  The CPI in Switzerland has been running at its highest level in 29 years near 3.5%.  The rate increase is meant to counter the effects of inflation.

However, the SNB then offered some non-committal comments regarding the value of the Franc and interest rates moving forward.  The SNB noted that it is ready to intervene in the FX markets to prevent excessive weakening or strengthening of the CHF. In addition, SNB President Jordan said that “it cannot be ruled out that further increases in the SNB policy rate will be necessary to ensure price stability over the medium term”.

As a result of the inconclusive comments regarding future rate hike, EUR/CHF went bid.  On a 15-minute timeframe, it’s easy to see that the FX markets weren’t happen with the comments, as EUR/CHF moved from 0.9468 to an intraday high of 0.9715, a low-to-high move of 247 pips!  However, the pair settled for the day near 0.9623. 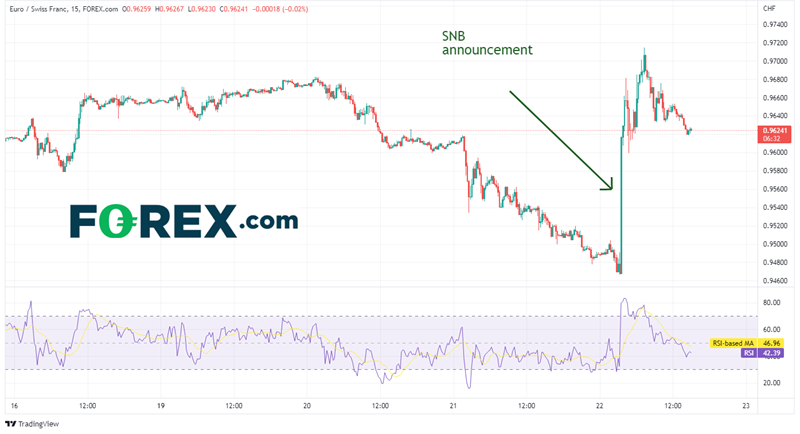 The SNB has a history of intervening in the FX markets.  Recall that in January 2015, the SNB held the floor in EUR/CHF at 1.2000, until it didn’t.  Many traders were long the pair as the SNB said they were committed to the peg.  However, on January 15th, 2015, the SNB lifted the peg and let the pair fall to a low of 0.8629, almost immediately! Many traders and some brokers were wiped out that day as they could not cover their margin calls. 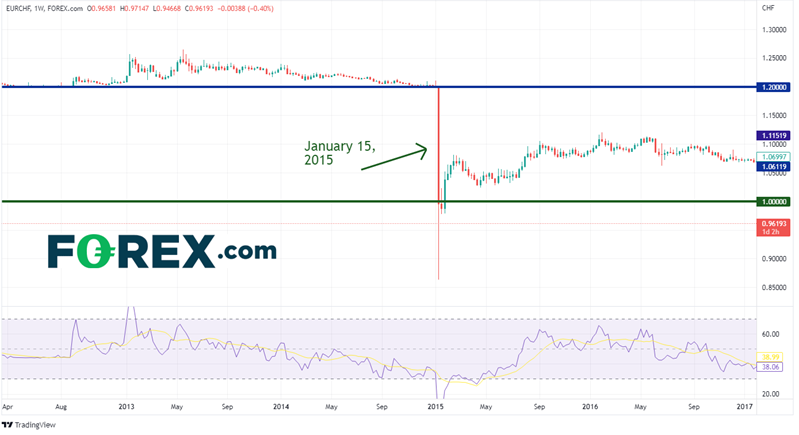 On a daily timefame, the SNB was suspected of being on the bid once again on March 7th, 2022 as EUR/CHF approached parity.  However, on June 29th, the pair traded below 1.000 and since July 5th it hasn’t looked back.  EUR/CHF had been moving lower in an orderly channel until August 29th when the pair broke above the top trendline and has been hugging it since.  Today, price formed a bullish engulfing pattern on the daily timeframe, as the EUR/CHF tries to move higher.  The first level of resistance is at today’s high near 0.9712, then the highs from September 2nd at 0.9867.   Above there, price can move back up to resistance at 1.0000.  However, if EUR/CHF moves back towards the trendline from the recent channel, the first level of support below today’s low is at 0.9428.  Below there, price can move to the 161.8% Fibonacci extension from the low of August 26th to the high of September 2nd at 0.9559, then the bottom trendline of the channel near 0.9230. 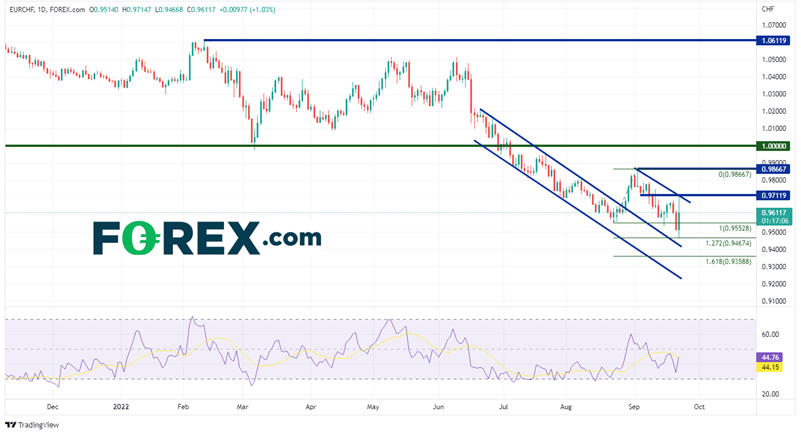 The SNB hiked rates by 75bps today.  However, the inconspicuous comments by the central bank left EUR/CHF weary as to if there are more to come.  Therefore, the pair went bid.  Watch Retail Sales next week and CPI on October 3rd for clues as to what may lie ahead for EUR/CHF.