Stocks limping as global economic concerns chip away at sentiment

Risk was off the menu first thing this morning in the last day of what has been a rather volatile week for the global equity markets. Although stocks on Wall Street managed to regain their poise slightly late in the day on Thursday to close mixed, global stock index futures slid along with Asian shares overnight. At the start of the European session, there was little desire for the bullish traders to step back in as they watched oil prices retreat following a three-day rally and safe haven gold and yen both rallied. However, stocks and oil prices did manage to bounce off their lows and by midday in London and the indices had erased a large chunk of their earlier losses. Preventing the sellers to come out in force so far is the still ultra-loose central bank policy with a rate rise in the US looking increasingly unlikely for this year. The ECB meanwhile is preparing to start snapping up corporate bonds as it expands its QE stimulus programme. The Bank of Japan has also hinted at intervening should the yen appreciate further. So, were it not for the on-going central bank support, equities may well be a lot lower especially with earnings being so poor in the first quarter of this year.

But it remains to be seen how the markets will behave once US investors come into play later in the afternoon – will we see a much-needed sharp recovery, or further withdrawal of bids? Worryingly, outflows from global equities have hit nearly $90 billion this year already. As the FT reported in this article, citing data from EPFR, investors pulled another $7.4 billion from global funds for the fifth consecutive week of redemptions. Over the past five weeks, some $44 billion have been taken out of the markets, which represents a five-year high. At the same time, inflows into haven assets precious metals have been rising. Clearly, this is not good news for the struggling stock markets.

Chief among investors’ worries is the apparent slowdown in global economic activity with the latest Eurozone first quarter GDP estimate being revised down to 0.5% from 0.6% previously. At the start of this week, concerns about China were revived as the latest trade figures revealed that exports fell in dollar terms by 1.8 per cent while imports slumped by a much larger 10.9% to leave a trade surplus of $45.6 billion. This ended a recent run of positive data releases from the world’s second largest economy. China will be at it again at the weekend with the latest industrial production, fixed asset investment and retail sales data all due for release on Saturday. Another poor set of figures could potentially lead to a sharp drop when trading gets underway on Monday of next week.

Meanwhile the persistently soft US data of late means investors are growing worried about the health of the world’s largest economy, too. On Thursday, for example, we saw the weekly unemployment claims rose by a surprisingly large 20 thousand applications to 294,000 when an increase of a few thousand was expected from the prior week’s 274,000 total. Over the last three weeks, jobless claims have been steadily rising after dropping to record lows recently. With last month’s nonfarm payrolls data also pointing to a more subdued employment growth, the labour market recovery may well be losing steam.

Worryingly for the US economy, the vast majority of recent macroeconomic data have been below expectations while company earnings from the retail sector have also been disappointing, raising concerns about the level of consumer spending. Consequently, Friday’s April retail sales data may well miss the already-downbeat expectations of a 0.3% month-over-month fall. Core retail sales, which exclude automobiles, are however expected to have risen by 0.6% in April. But in our view, this also looks optimistic. Friday’s other key US data is the closely-watched Consumer Sentiment Index from the University of Michigan. Given the recent soft patch in US data, we wouldn’t be surprised if the respondents were feeling relatively downbeat about the level of current and future economic conditions when the survey was carried out. As such, the UoM’s Consumer Sentiment Index may drop below the prior reading of 89.0 and weigh on the US dollar.

Looking ahead, next week’s economic calendar is light for equity market participants as not all of the macro pointers will move the stock markets. But for FX traders, there will be lots of data to consider, including, for example, UK CPI and wage data and Australian employment figures. However, there will be a few relevant macro pointers for the stock markets, too. As mentioned, China’s industrial data at the weekend will be among the most important in this regard. The latest US CPI measure of inflation (on Tuesday) and the Fed’s last policy meeting minutes (o Wednesday) may cause investors to alter their rate hike expectations significantly. If so, this could have implications for not only the dollar but the stock markets, too. The weekly US crude inventories data (on Wednesday) is also becoming increasingly important for the stock markets due to its correlation with oil prices. In addition to economic data, there will be plenty of corporate earnings news to consider, mainly from the UK, with the key ones listed below:

Given the sheer number of UK-listed earnings, the FTSE 100 may be the one to watch next week, especially as it is a commodity-heavy index which may well be impacted by the volatility in oil and metal prices as a result of Chinese data and US dollar. In addition, changes in opinion polls regarding the UK-EU referendum could influence the FTSE. If ‘Brexit’ concerns increase by a notch or two, investor sentiment could turn even more sour.

From a technical point of view, the FTSE’s inability to climb back above the 200-day moving average and key resistance in the 6180-6235 area is a bearish development. At the time of this writing, the index was trying to establish a short-term base around the prior lows of 6050-65 area. So, there was the potential for at least a short-term bounce. However if this level breaks then it is anyone’s how far the index could drop. But it will be important to watch the upper side of the broken bearish trend line for a potential re-test or the 61.8% Fibonacci retracement level at 5855. At this stage only a decisive break above the aforementioned 6180-6235 resistance area would be deemed a bullish outcome. 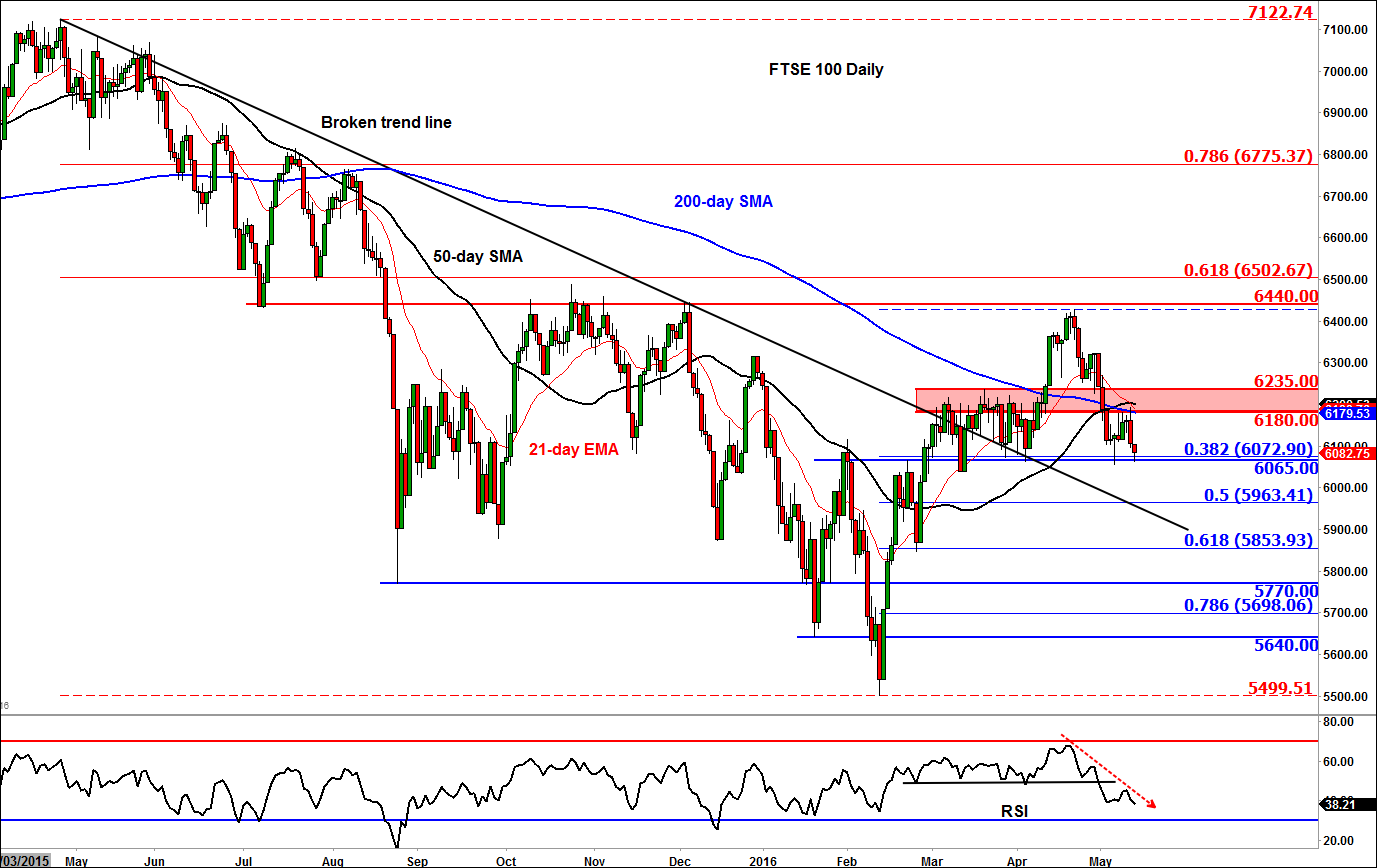