At the start of this very important week in the financial markets, the dollar gained ground while stocks, gold and oil prices were the early losers. Things will look and feel a lot different by the end of this week, make no mistake about it. Once we’ve digested all the central bank meetings, economic data and company earnings, the markets will have completed a potentially ferocious rollercoaster ride. Will it be a horror show for stocks? How about government bonds? The dollar could be the winner if the latest US economic data underscores expectations for a Federal Reserve rate hike by December – unless there is more drama in US presidential election campaign following news of the FBI probe into Hillary Clinton’s emails on Friday. The potential appreciation of the dollar will most likely be bad news for the buck-denominated and noninterest-bearish precious metals, as well as for US stocks due to its negative impact on future company earnings and US exports.

Now as far as today’s session is concerned, we’ve had some European data earlier this morning and there’s some US macroeconomic pointers to look forward to in the afternoon. The Eurozone GDP grew 0.3% in the third quarter, which was bang in line with economists’ expectations and follows a similar performance in Q2. In terms of inflation, the headline October Consumer Price Index came in at +0.5% while core CPI was 0.8% year-over-year. Both measures were unchanged from their September readings and also in line with expectations. The EUR/USD did not move much on the back of these figures as you would expect. However it was still reeling from news of an unexpected 1.4% month-over-month drop in German retail sales which came out earlier in the morning.  Today’s data from the US will include personal spending & income and the core PCE price index measure of inflation. Ahead of the US macro numbers, the EUR/USD was still trading just above the key 1.0945/50 short term support at the time of this writing.

The EUR/USD’s rally on Friday ensured that the world’s heaviest-traded currency pair would end a three-week losing streak. However, the Fibre is not out of the woods and more losses could be on the way this week should the dollar rally as a result of stronger US data and/or due to a more hawkish Federal Reserve than expected. From a technical perspective, the break of short-term resistance at 1.0945/50 area has surely unnerved some bearish speculators who may now stay on the side-lines until this area is recouped or if price reaches higher levels of resistance.

Nevertheless, the underlying trend for the EUR/USD remains bearish. Not only has price formed a clear pattern of lower lows and lower highs, it has also recently broken both of its short- and medium-term bullish trend lines. What’s more, the 50-day moving average has now crossed below the 200, in a development called a “death crossover.” While these averages are in this particular order, some traders – especially trend followers – tend to only look for sell rather than buy setups.

Thus, the bulls will need to chop lots of wood if they are to hold the EUR/USD up at these levels. But without any fundamental support, they will probably crack under pressure. In the event that the EUR/USD moves back below 1.0945/50 support on a daily closing basis then I would expect to see further weakness in the days to come. The low from last week around 1.0850 would be the first key bearish objective to watch, followed by the March low around 1.0825. Meanwhile for the bulls, a break above prior resistance at 1.1040 would be a favourable outcome. In this potential scenario, they may then target 1.1140 – previous support area – as their next upside objective. 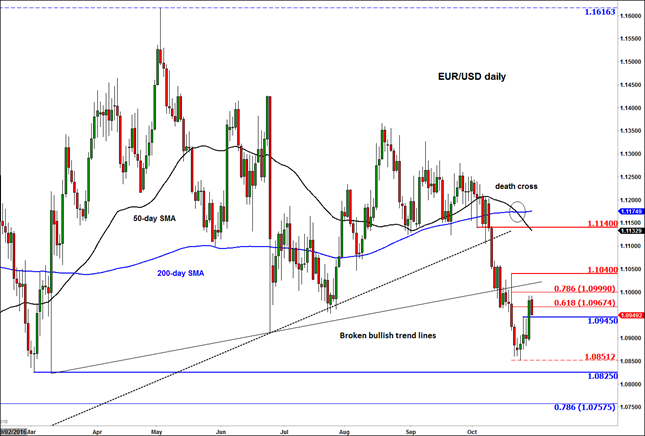