US NFP close to expectations. Will it make a difference to the Fed?

Despite the mixed employment data, the Fed is unlikely to be swayed by anything in today’s report.  The headline print is still in strong positive territory.  In addition, the Fed said that it is willing to sacrifice some of the Unemployment Rate in order to bring down inflation.  And although the increase in the Participation Rate may have added to the rise in the Unemployment Rate, the rise in interest rates by the Fed may finally be making its way to the jobs markets. Some private companies, such as Meta, are beginning to reduce their workforce as other expenses increase.  Although one economic data point doesn’t make a trend, could this be the beginning of a string of higher Unemployment Rates?

USD/JPY has been moving aggressively higher since breaking above horizontal resistance on March 11th near 116.35. After it became apparent that inflation was rising and the Fed would have to raise interest rates aggressively, the pair continued higher through the spring and summer.  Twice, USD/JPY moved to new trend highs and corrected in a descending wedge formation. As price approached the apex of the wedges, it broke out and continued to move higher, retracing 100% of the wedges.  Yesterday, USD/JPY reached its highest level since August 1998 at 140.23.  Today, the pair eclipsed that print, making a new high of 140.80.  However, the US Dollar began moving lower after the NFP print as profit taking ensued. If today’s print closes near unchanged (140.20) USD/JPY will have formed a shooting star, an indication of a possible correction ahead. 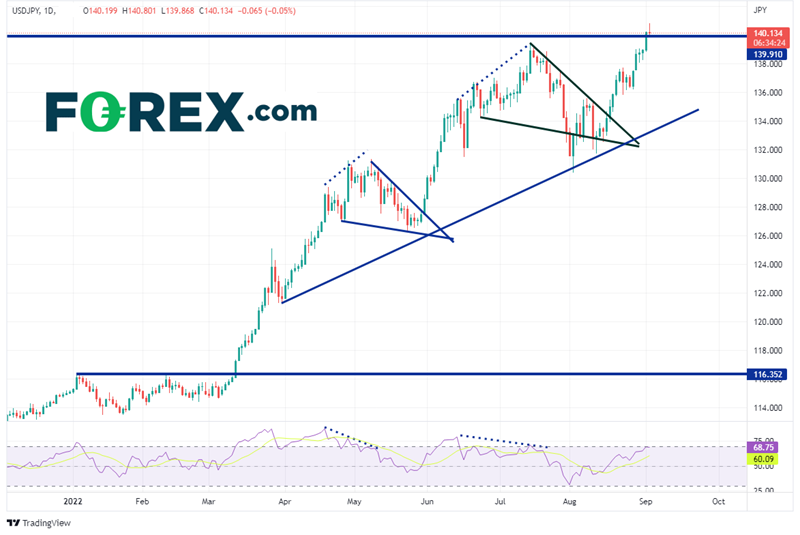 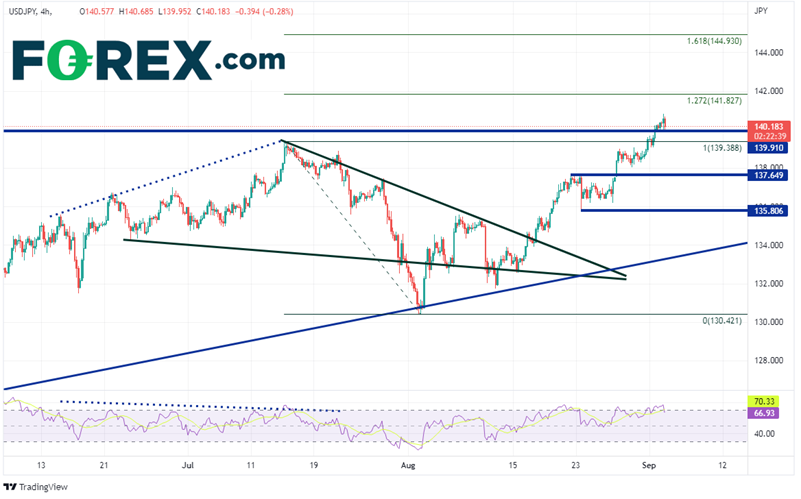 Today’s Non-Farm Payroll print was near expectations.  However, the Unemployment Rate was higher than expected, most likely due to the higher Labor Participate Rate.  There doesn’t appear to be anything that would sway the Fed’s rate decision for either a 50bps increase or a 75bps increase at the next meeting.  Perhaps USD/JPY is just correcting today as markets wait for the CPI print on September 13th.