USD/CAD dropped to a new 9-month low below 1.2800 support on Tuesday as crude oil prices surged dramatically due to renewed speculation that a deal to cap oil production levels among OPEC nations and Russia could plausibly be reached.

With a meeting of major oil producers scheduled for this weekend on April 17, the run-up to that meeting has been rife with constantly shifting conjecture over what the results of those negotiations might possibly be.

On one side, pessimistic observers have pointed to the likelihood that Iran will not participate in any deal due to its newly-obtained, post-sanction freedom to export its long-idle oil production, as well as Saudi Arabia’s previous assertion that no deal would take place if Iran was not a participant. Retaining and gaining market share is the common goal of all oil-producers, and a deal to freeze output would run counter to that goal. Furthermore, even if a deal did take place, there would still be the looming question as to whether a coordinated production cap at the recent near-record output levels would do much to alleviate the oversupply situation. On the other side, optimists have pointed to the fact that major OPEC producers and Russia are under immense pressure to reach a deal of some kind in order to help relieve plunging oil prices, which have caused severe economic problems across the oil-exporting world.

It was reported on Tuesday that prior to next Sunday’s meeting, Russia and Saudi Arabia had already agreed on a production cap and that the decision to do so is not contingent upon Iran’s participation. Whether this news is completely accurate or not remains to be seen, but the report was enough to further fuel crude oil’s recent rally and recovery.

The surge in oil prices prompted a corresponding rise for the oil-correlated Canadian dollar. This was manifested as a sharp plunge for USD/CAD below the noted 1.2800 support level. Since late January, the currency pair has slid in a steep downtrend from its long-term highs near 1.4700. In the process of this slide, USD/CAD has broken down below several major support factors, including 1.4000, 1.3600. 1.3400, and most recently, the 1.3000 psychological level. Additionally, the 50-day moving average has recently crossed below the 200-day moving average, suggesting strong bearish momentum. As USD/CAD has just reached down to break below the 1.2800 level on an intraday basis, the currency pair could now be targeting the next major downside support level around 1.2550, on any continuing oil rebound. 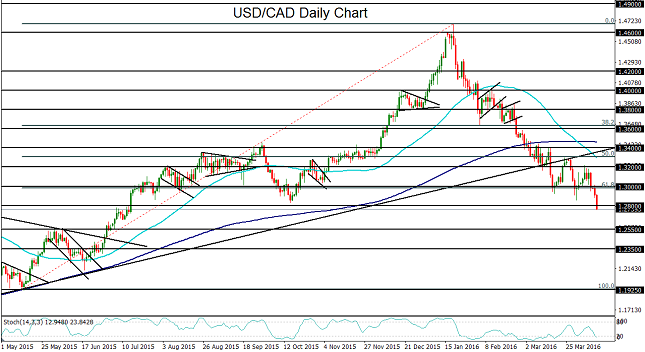