The dollar is finally managing to show relative strength after weeks of indecisive price action. The US currency had been rising strongly in recent days against all the major currencies, except the likes of the euro, pound and Swiss franc. But at the start of this week, we have seen a sharp fall in the EUR/USD and a big rally in the USD/CHF. At the time of this writing, the dollar was also rising noticeably against the yen, pound and the Australian dollar. Bucking the trend was the Canadian dollar, which was supported by a stabilising price of oil. The Dollar Index was therefore up for the second consecutive day and above its 200-day moving average again.

The dollar remains fundamentally supported as we have been banging on about it for months. Continued strength in US economic data has allowed the Federal Reserve to tighten its monetary policy. The market now fully expects another rate rise in June. Meanwhile, major central banks elsewhere have also stopped loosening their policies. However, unlike the Fed, most are still either dovish or at best neutral. Thus, the dollar is likely to perform much better going forward against currencies where the central bank is still dovish rather than neutral.

With the BoE and ECB slowly turning neutral, maybe it is time the market turned its attention to the Swiss franc again, because the SNB is still pretty much dovish. Interest rates are unlikely to be raised anytime soon due to the lack of inflation in Switzerland. What’s more, the SNB is still intervening in the FX markets as it firmly believes the franc remains overvalued.

In fact, despite the EUR/USD’s apparent breakdown yesterday there was an even larger breakout on the USD/CHF pair. The Swissy surged from a low of around 0.9870 to end the day just shy of parity. Such was the strength of the breakout that the unit saw very little pullback before it extended its gains today. Correspondingly, the EUR/CHF – the forgotten currency pair – broke further higher despite widespread euro weakness. For us, the breakout in the EUR/CHF makes the USD/CHF long a more attractive trade than EUR/USD short.

All that said, the USD/CHF is still not out of the woods just yet, but it has cleared many short-term hurdles nonetheless including resistance at around the 0.9945-70 area, where the 200-day moving average also resides. Today, the pair has moved north of parity, breaking through the 50-day moving average in the process. However, it still needs to break the bearish trend line, around 1.0040, in order to confirm the bullish turnaround. In any case, the 0.7745-70 area, once resistance, could very well turn into support upon a potential re-test, leading to another bounce. However, if the unit moves below this area then this would damage the near-term bullish outlook. 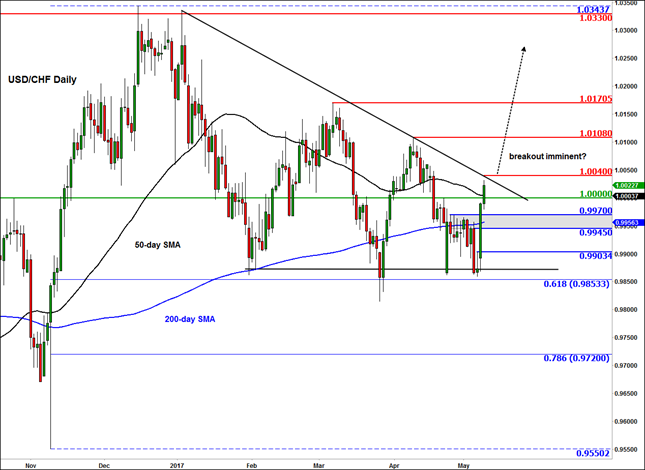