Well, that was the sort of volatility that was so badly need and missing so far in the week! The eagerly anticipated US inflation report lived up to expectations in terms of market impact as the dollar plunged and everything else went up, including all foreign currencies, gold, bitcoin and stocks. Among the majors, the EUR/USD has finally broken out of its tight consolidation phase, suggesting more short-term gains could in the days ahead, despite all the troubles for the Eurozone.

Inflation not so hot

Driven by sharp declines in energy and gasoline prices, the 8.5% annual inflation read was relatively sharply weaker from 9.1% recorded in June. It is still uncomfortably high, but investors will take some comfort in that it was the first headline CPI reading that came in below expectation in 11 months. Here’s a succinct CPI recap by my colleague Matt Weller.

Debate about 50 or 75 bp hike will continue

The Fed’s Charles Evans wasted no time as he came out and said today's inflation data is the first positive report, but that further rate rises were warranted this and next year, predicting that the Fed Funds to top out around 4 percent. Though the probability of another 75 basis point hike in September has fallen sharply, the debate about 50 or 75 bp hike will continue for sure, and the Fed will be keen to keep that debate going until we get the next CPI and employment reports. There’s plenty of time left until the FOMC’s September 21 meeting.

Next up: UoM Consumer Sentiment (Friday)

Now that we know July was a strong month for employment, but not so strong for inflation, investors will look for signs on how the American consumer’s outlook is shaping on the economy and inflation prospects. Friday’s release of the University of Michigan’s closely-followed Consumer Sentiment and Inflation Expectations surveys will be in sharp focus. Thanks to soaring prices of everything from gas to food, consumer sentiment in the US has been dropping rapidly in recent months, mirroring the situation in Europe and the rest of the world. However, the US economy has weathered the inflation storm better than other regions, which is why the dollar has until recently been so strong. But is the momentum changing? If we see signs of a struggling US consumer, then this could hurt the dollar further. 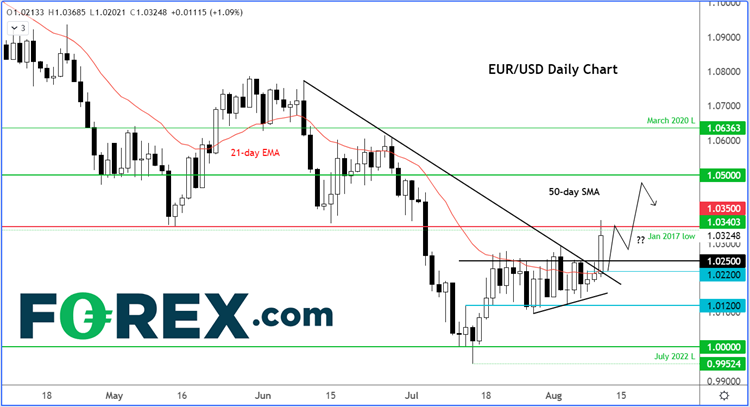 For those who follow my analysis articles closely, you already know that I have been quite vocal about the prospects of a EUR/USD recovery to at least 1.0350 and generally a dollar sell-off in recent weeks. Well, today the EUR/USD has hit that level and went about 15 more pips higher, before retreating somewhat. This 1.0350 level was previously a key support zone and it is now offering some resistance. However, given how long we had price coiling in a tight range prior to today’s rally, there is now a good chance the EUR/USD will continue higher. I reckon that 1.0500 is now not too an unrealistic target. However, as before, I am not very confident in anticipating a major recovery given the troubles that Europe faces with regards to its energy needs.