Gold: What does Brexit deal mean for the metal?

I reckon not a lot.

News that the UK government and EU had secured a Brexit deal sent the pound and euro soaring higher, along with European stocks and US index futures. Safe haven gold fell back after rising on Wednesday, before bouncing back to turn flat on the day as stocks eased off their highs again.

The Brexit deal will be presented to European leaders at the EU Economic summit in Brussels today, before UK MPs vote on it on Saturday. Now the DUP has already announced it cannot support the new arrangement, while the opposition party’s leader Jeremy Corbyn has called it "an even worse deal than Theresa May’s, which was overwhelmingly rejected." So it remains to be seen whether it will be approved on Saturday, which means there is still a chance for a no-deal Brexit – although the more likely scenario would be for the Prime Minister to follow the law and request the EU for a Brexit deadline extension, which then opens up more uncertainty.

So, while risk assets are cheering the news today, it could be a different situation next week. In fact, we may see some sort of a negative reaction as early as later today with investors who bought the rumours go on to sell the news.

As far as gold is concerned, I continue to think that — despite Brexit optimism and positive signs from the US-China trade situation — the metal may be able to extend its advance over the coming days, now that it has worked off its overbought conditions due to its recent consolidation following a four-month rally that lasted until September. That rally was explosive, which took prices out of a 6-year consolidation range. So, it is likely in my view that there is more juice left in that rally - even if some of the previous concerns relating to Brexit and US-China trade have eased a little.

Meanwhile, the US dollar has remained on the back foot following the release of disappointing US retail sales on Wednesday, which raised concerns over the US economy and supported expectations that the Federal Reserve will cut interest rates at its next meeting.

With the Dollar Index (DXY) now in its third down week, safe-haven gold stands ready to benefit from any bouts of volatility in the stock markets, geopolitical tensions or any other sentiment-sapping event. 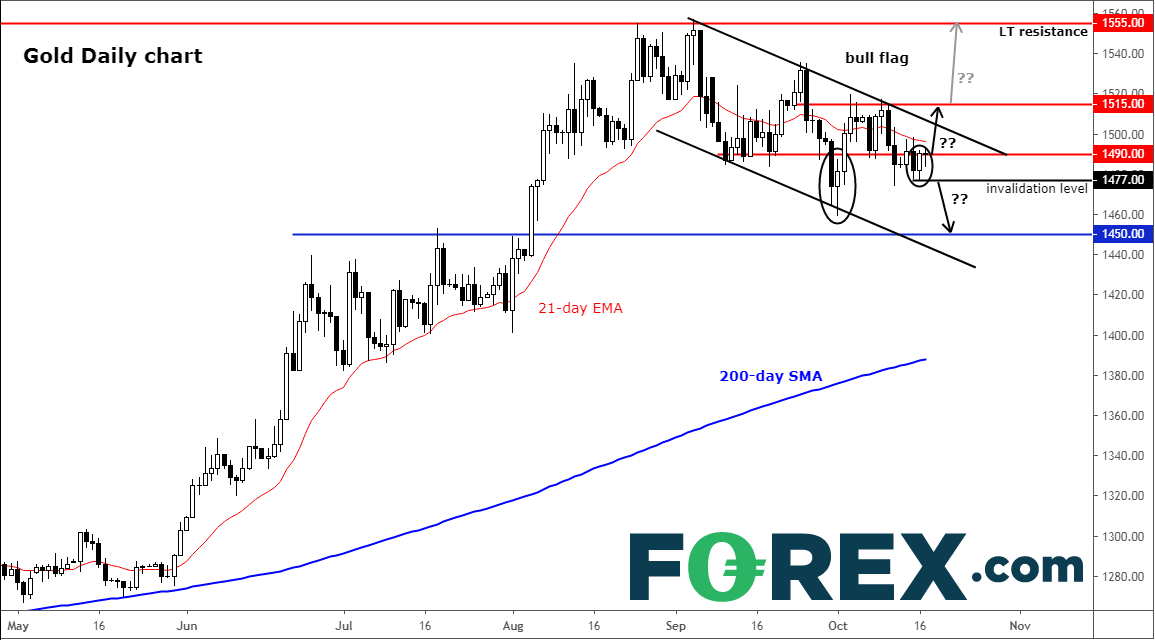 As before, while a return to $1350 long-term support cannot be ruled out, I think given yesterday’s price action when gold formed a bullish-looking candle on its daily time frame and the fact that the metal was able to rebound quickly today after initially spiking lower on the Brexit news, goes to show investors are still interested in the yellow metal despite the ongoing risk rally.

Gold now needs to break resistance around $1498-$1500 area in order to brighten the short term outlook, while a rally outside of the bull channel would be a more decisive signal for the bulls.

For the bears, gold needs to break below Wednesday’s low around $1477 in order to trigger fresh technical selling. If this happens then a drop to that long term support around $1450 would become highly likely.