What to make of December’s FOMC meeting?

The big takeaway from today’s FOMC meeting is that the Fed really hasn’t changed its view very much from October.  Powell has indicated in the past that interest rates will remain at a sufficiently restrictive levels for some time until the Fed sees enough evidence that inflation is clearly moving lower.  In addition, he has said that it is the terminal rate that matters, not the pace at which we get there.  At today’s meeting, as much as the markets had hoped that the Fed may have seen something to change that view (ie lower CPI readings), Powell wasn’t biting.  The Fed hiked 50bps, as expected.  Aided by the new Summary of Economic Projections, which showed the median interest rate at the end of 2023 at 5.10%, Powell was able to continue with his “not dovish” speak.  He talked about how the Core PCE still needs to fall and how the Unemployment Rate still needs to rise.  He also added that Average Hourly Earnings need to fall. All-in-all, the Fed isn’t thinking about lowering interest rates at any point during the next year.

But do the markets believe him?  Stocks fell, by a relatively small amount, while the US Dollar went bid.  However, the DXY later moved lower as yields seemed like they weren’t buying what Powell was selling.  But did that even matter.  Look at the range in the 2-year yield for today. The low was 4.136 while the high was 4.161, a range of only 2.5bps for the day, with the close near unchanged for the day. 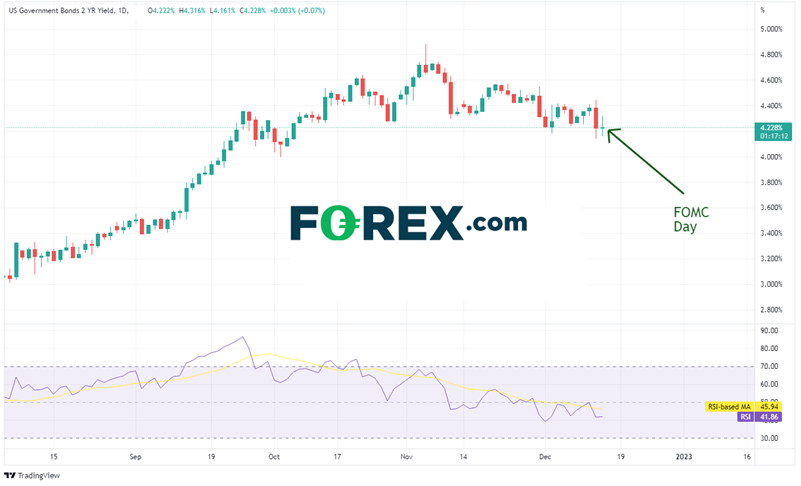 Looking at a chart of USD/JPY, there is currently a strong correlation between the US 2-Year yield and USD/JPY at +0.93.  Correlation coefficients above +0.80 are considered strong positive correlations and the two assets tend to move together.  USD/JPY made a low of 134.51 and a high of 135.99, a range of 148 pips.  The average true range for USD/JPY (shown in the bottom panel of the chart below) is 193 pips.  So, on what is supposed to be a huge day for the volatility due to the FOMC meeting, USD/JPY couldn’t even trade outside of its average true range. 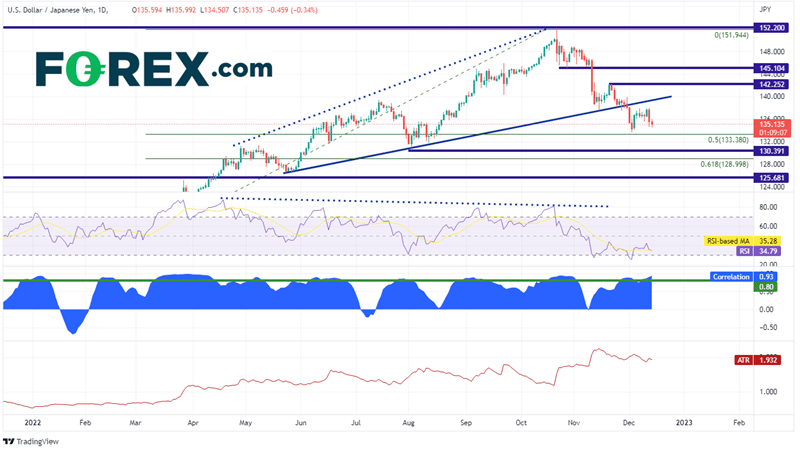 What is my point?  My point is that although the Committee raised next year’s median interest rate level to 5.1%, and although Powell talked himself in circles during the press conference about raising the unemployment rate, lowering average hourly earnings, and decreasing Core PCE, at the end of the day, markets didn’t care.

If markets don’t care about what Powell has to say about interest rates, the next place to turn their attention may be growth and the outlook for a possible recession in 2023!  Watch Retail Sales data on Thursday for the first clue!