Less than two weeks ago, strikes on Saudi oil fields took out 5% of the world’s total production in the biggest single supply shock ever, causing oil prices to spike nearly 20%.

Today, oil prices officially erased the entirety of that surge.

It’s trite to say that markets are moving faster than ever, but this month’s price action in oil serves as an undeniable reminder of that fact. With Saudi production nearly fully recovered and news that the country has agreed to a partial ceasefire with Yemen’s Houthi rebels, the market is already looking ahead to the next hotspot that could influence oil’s global supply.

Now, traders are turning their attention to Iran. According to one headline, the Iranian President stated that the US had offered to remove all sanctions on the country in exchange for talks over Iran’s nuclear capabilities. Oil prices initially dropped on this apparent sign of progress in the region, but the news is now in dispute after some Iranian reporters suggested that the headline was mistranslated. In any event, the Trump Administration doesn’t appear keen to meet with Iran at present, so crude will continue to trade with a geopolitical risk premium in the near term.

Technically speaking, WTI is trading almost precisely in the middle of its 5-month range between 51.00 and 63.25. With both the RSI and MACD indicators showing neutral readings, it’s difficult for traders to have a strong bearish or bullish bias in the short term: 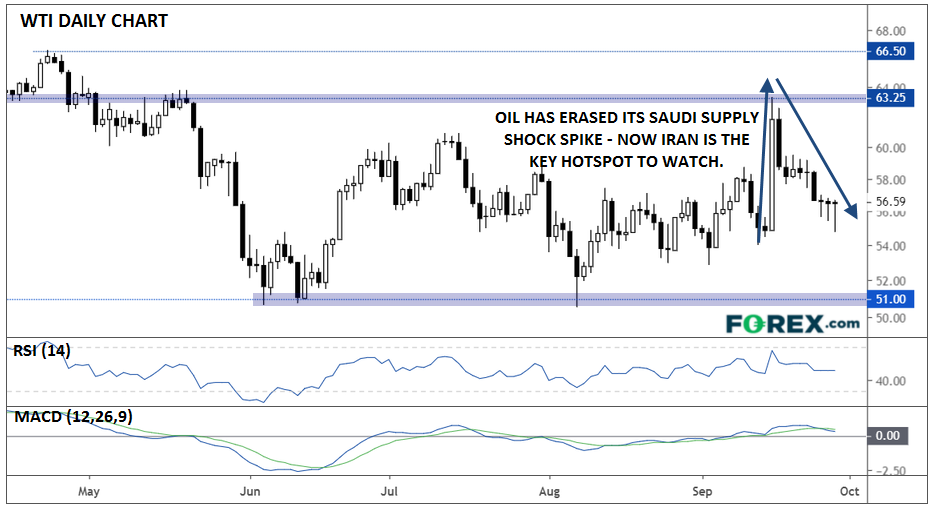 Moving forward, oil traders may want to focus on using rangebound strategies (buying dips toward $50 or selling rallies toward $60) until a major development changes the global supply and demand dynamics for crude.