Trade war concerns remain the dominant theme in the markets.

Trade war concerns remain the dominant theme in the markets. Dow futures have collapsed 500 points and other global indices were sharply lower at the time of writing after China retaliated overnight to a slate of trade measures launched by the US government hours earlier aimed at narrowing China’s vast trade surplus with America.

China said it will apply tariffs on 106 US-produced goods, ranging from aeroplanes to soya beans.

While the escalation of trade wars have weighed heavily on commodity prices such as corn, soya beans, crude oil and copper, gold on the other hand has been able to climb higher thanks to its safe haven status.

Gold has been supported by the stock markets falling out of favour, while the directionless dollar has also helped to support the metal’s prices.

That being said, gold’s gains have so far been very limited and the metal is still range-bound as it continues to find resistance near last year’s high of $1357 and support around the pivotal $1300 level.

But the potential for a sharp dollar move is there this week, given the upcoming releases of key US data which culminates with the jobs report on Friday. Should the dollar regain its poise then gold could come under pressure, while further weakness for the greenback could help to keep gold supported.

From a technical point of view and as already mentioned, gold is currently stuck in a wide range between around $1300 and $1355.

However, recent price action looks bullish, which suggests that we may break higher in the coming days – US dollar permitting.

After all, gold is currently residing comfortably above its 200-day averages. It is even above the 21-day exponential moving average, which has crossed above the 50-day simple average now.

The slope and direction of these moving averages objectively tell trend followers that the path of least resistance is indeed to the upside.

With that in mind, we’re now in the lookout for a clean break above the $1357 resistance. If that were to happen then gold bulls may aim for the 2016 high of $1375 as their next immediate target.

However, if gold once again fails to clear the abovementioned $1357 and breaks back below the 50-day average and support at $1330 then it could drop towards the next support at $1318 ahead of possibly $1300 next. 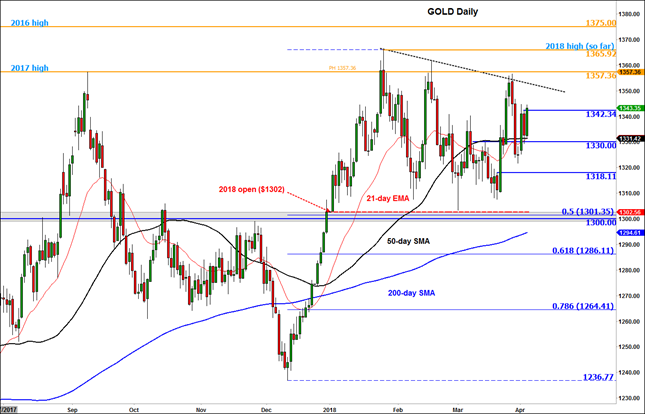