EUR/USD: 3 Storylines Driving Trade at the Start of the Week

The world’s most widely-traded currency pair, EUR/USD, is particularly interesting at the start of the week. As we see it, there are three main storylines driving trade in the pair:

Early in European session trading, Germany released its IFO =survey. In brief, the overall reading of the business climate in the Eurozone’s largest economy dipped to 102.0, the second-lowest reading of the year. This drop was driven by both a decline in the current assessment of the economy and expectations for the future.

In his just-concluded comments to the EU Parliament, ECB President Draghi noted that "the data that have become available since [his] last visit in September have been somewhat weaker than expected.” He expressed some optimism that the slowdown may be temporary but ultimately reiterated that significant stimulus was still needed and that the current uncertainties still call for patience. While it still appears likely that the ECB will wind down its asset purchases next month, the central bank may be more cautious about normalizing policy midway through next year unless economic activity recovers.

3) Italy comes to the negotiating table?

Meanwhile, in Italy, the highly contentious budget debate saw a bit conciliation over the weekend. After holding a hard line for a 2.4% budget deficit in recent weeks, Italy’s Deputy PM Matteo Salvini stated that “if there's a budget that makes the country grow, it could be 2.2 percent or 2.6 percent.”

Following on those comments, Reuters is reporting that the Italian government is discussing reducing its budget deficit target to the 2.0-2.1% range, though it still maintains that the promises made during the campaign (a tax cut, more welfare, and a rollback of pension reforms) must be met. As is often the case with government policies, Italian policymakers may be able to tweak the start dates / scopes of some of the reforms in order to meet an arbitrary target for the coming year, but even if an agreement is made in the coming days, we expect this issue to crop up again in Italy and other European countries in the future.

Turning our attention to the chart, EUR/USD remains within a textbook downtrend (lower lows and lower highs) on a short-term basis. That said, the pair did see a false break” below previous support at 1.1300, suggesting that the appetite for continued weakness may be waning.

For this week, the bias in the pair remains to the downside as long as last week’s peak near 1.1475 holds. Previous support around 1.1300 and the mid-November lows at 1.1215 will be possible target areas for bears, pending the outcome of this week’s fundamental events, including the US GDP revision and Fed Chair Powell’s speech on Wednesday, as well as ECB President Draghi’s presser and the Fed minutes on Thursday. 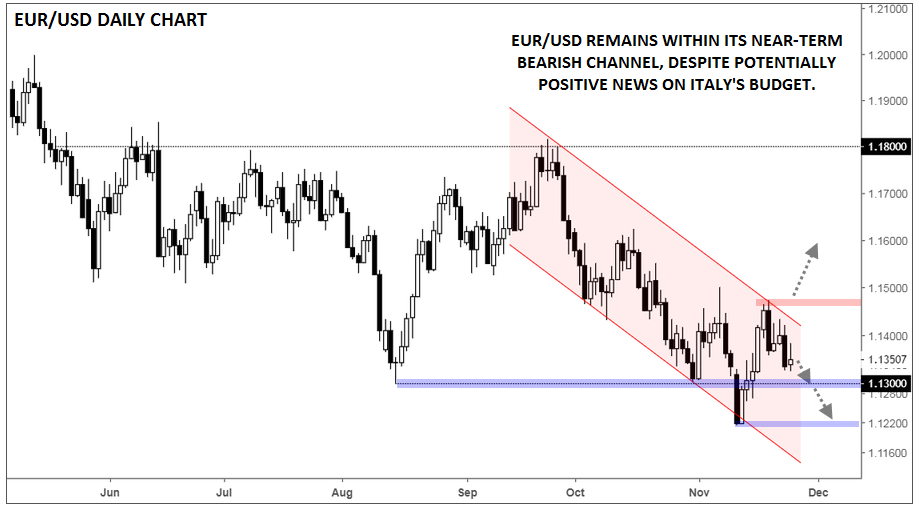