FOMC minutes: Hawkish Fed not (yet) deterred by trade and yield curve concerns

As a reminder for traders who are still a bit groggy after celebrating America’s independence yesterday, the Federal Reserve opted to raise its benchmark interest rate by 25bps to the 1.75-2.00% at its meeting three weeks ago...

As a reminder for traders who are still a bit groggy after celebrating America’s independence yesterday, the Federal Reserve opted to raise its benchmark interest rate by 25bps to the 1.75-2.00% at its meeting three weeks ago (see “FOMC recap: Hawkish statement and projections, hesitant Powell”).

We noted at the time that the central bank made numerous upgrades to its economic assessment, both in the monetary policy statement and the quarterly Summary of Economic Projections (SEP). Most importantly, we learned that the median Federal Reserve member now expects rates to rise to additional times this year (with the most likely occasions in September and December, when the central bank holds an accompanying press conference). Finally, Fed Chair Powell expressed a more cautious tone in his press conference, citing concerns about global trade as a possible risk to continued economic growth.

With today’s release of the minutes from that June meeting, we now know that Powell’s colleagues at the Fed shared this concern. According to the minutes, “…most Fed officials saw intensified risks around trade policy,” and the risk of an escalation in the nascent trade war has, if anything, escalated over the past three weeks with the US, China, European Union, Canada, and Mexico all threatening further tariffs and more protectionism.

In addition, the minutes highlighted that "a number of Fed officials said it was important to watch the yield curve slope,” an indicator that is gaining importance as it approaches inversion; to wit, the 2yr-10yr Treasury spread has dropped below 30bps today to its lowest level since 2007.

Despite worries about trade and the yield curve, there was still broad support for “gradual” rate hikes amid the “very strong economy,” so the primary thrust of the minutes supports the central bank’s hawkish lean.  Indeed, Fed officials discussed removing the statement language about monetary policy remaining “accommodative” in an acknowledgement that interest rates are approaching a “normal” level relative to history.

With many traders on holiday and the much timelier June Non-Farm Payrolls report set for release in less than 24 hours, the market reaction to today’s FOMC minutes has been minimal. US stocks have seen a modest intraday drop on the release, with the Dow Jones Industrial Average shedding a quick 100 points. The benchmark 10-year Treasury bond is trading unchanged on the day, while the US dollar is ticking higher against most of its major rivals but falling vs. the New Zealand dollar and euro. 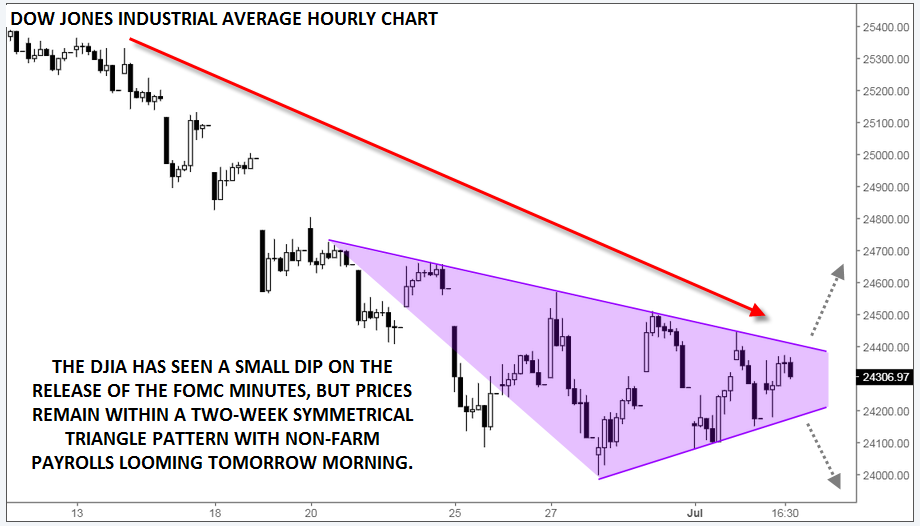