The melt up in US stock markets continued last week, leading to some further follow-through in bullish momentum when index futures re-opened for trading overnight, before easing lower along with European stocks.

The melt up in US stock markets continued last week, leading to some further follow-through in bullish momentum when index futures re-opened for trading overnight, before easing lower along with European stocks. The S&P futures briefly tested last year’s all-time peak and thus achieved a new all-time high, before pulling back ahead of the open on Wall Street later. Last week, the Nasdaq 100 and Nasdaq Composite indices both hit new unchartered territories. As well as optimism over a US-China trade truce, sentiment has been boosted by: (1) more companies reporting above-forecast results, led by technology names; (2) lack of major bearish catalysts, and (3) outlook for lower interest rates for longer.

While the trend is clearly bullish for stocks and we may well see further gains in the coming days, the S&P 500 has now achieved its main bullish objective: above last year’s all-time high at 2941. So, going forward, the key question will be this: can the bulls sustain the rally? Bullish momentum may help to keep the index at these lofty levels for a while yet, but if we see signs of bullish exhaustion then we would favour looking for bearish setups to emerge in the weeks ahead, especially since we are heading into months when the markets typically underperform (“sell in May and go away,” etc.). A particularly bearish development would be if the S&P stages a mini rally above the previous record high but then quickly comes under pressure and closes back below this level. This would create a typical false break reversal formation. But for now, the bulls remain in control and we could see some further follow-though especially if the likes of Apple and Google were to beat their earnings estimates. 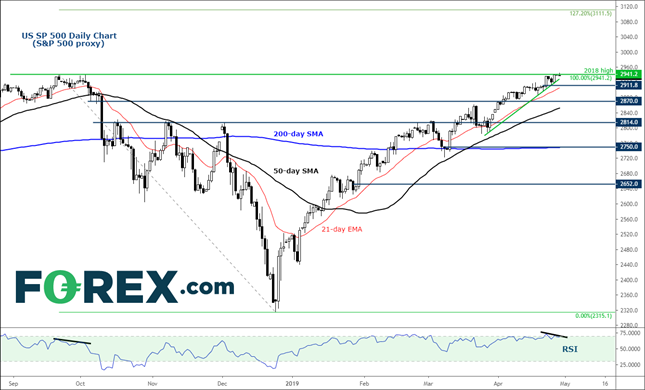