The US dollar has performed well against havens Swiss franc, Japanese yen and gold so far in today’s session, while falling against commodity dollars such as the Aussie and Kiwi. Put simply, it has been another risk-on day. Indeed, European stocks traded near their recent highs and S&P 500 futures suggested Wall Street will open at a fresh record high. The Chinese yuan strengthened past the seven per dollar mark for the first time since early August.

Can the gains last?

While the stock market’s bullish trend and the yuan’s rebound may be gaining strength, it is worth remembering that the S&P 500 has been up for multiple days in record highs now, pushing some momentum oscillators to so-called ‘overbought’ levels and increasing the chances of profit-taking. The common denominator has been Trump’s daily jawboning. Yet, fundamentally not a lot has changed. According to Bloomberg, China is now insisting that the US should remove some of the existing tariffs simultaneously with China and it shouldn’t just be the suspension of new tariffs in exchange for major concessions from Beijing. Specifically, Bloomberg says, China is seeking to the roll back of US tariffs on as much as $360 billion of Chinese imports. If the report turns out to be correct, this may irk Trump, given that China has agreed to up its agricultural purchases from the US by ‘only’ $20 billion so far.

So, a phase 1 trade deal is far from certain, as so far, it has just been promises of a deal underpinning both stocks and the yuan. Thus, it is possible that the rally in both markets will at the very least pause. If the talks collapse, then so too could the markets and the yuan. 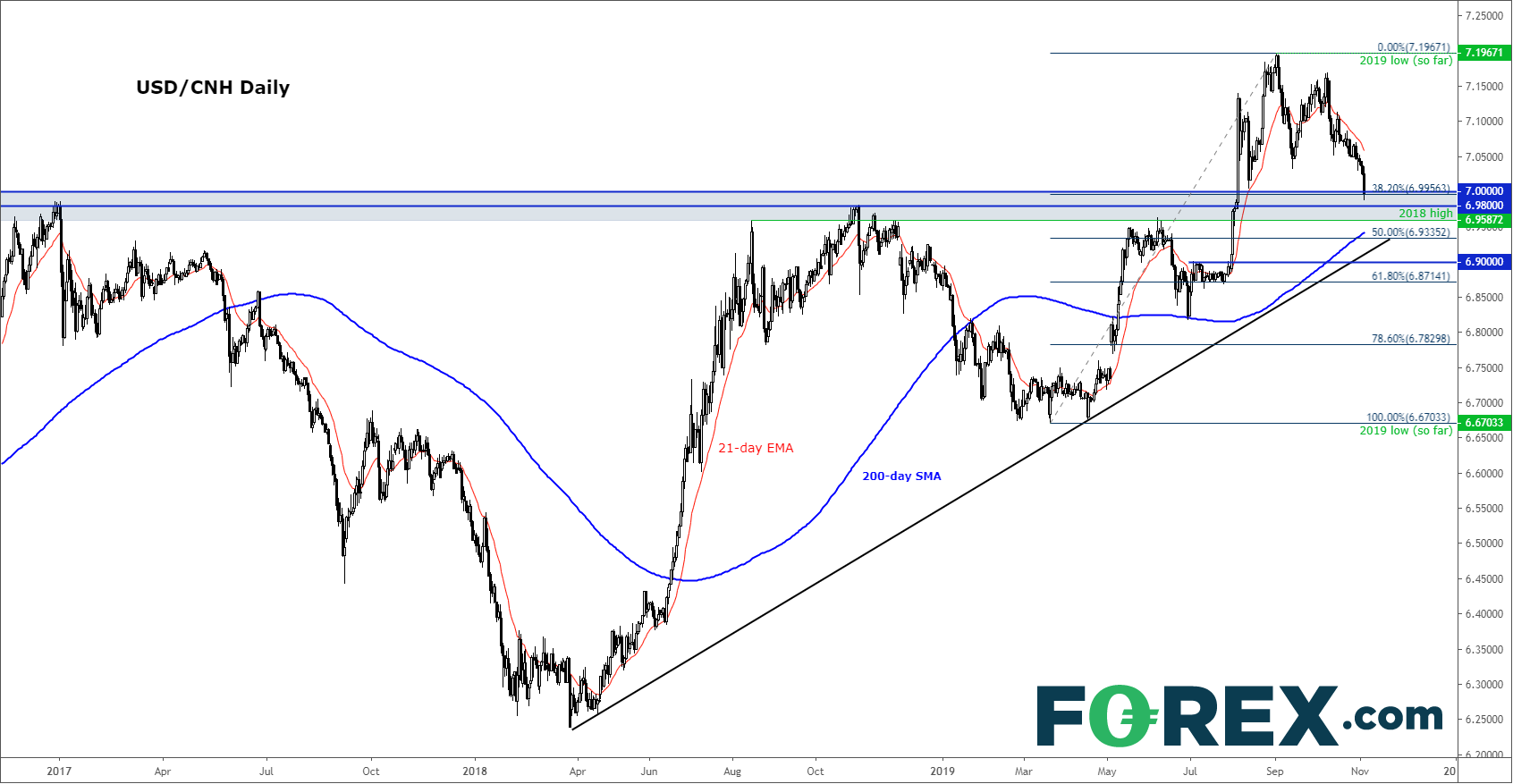 From a technical point of view, the USD/CNH’s short-term trend has certainly been bearish. However, the longer-term bullish trend remains intact, for now. In fact, following the break of the 7.00 handle, rates have dropped to a key zone now. As per chart, the range between 6.9885ish to 7.0000 was previously a major resistance area. Price is now re-testing this area. Usually, but not always, former resistance turns into support. If this happens, the USD/CNH could stage at least a minor recovery from round here. But potentially, it could even start the next major leg higher. However, for the latter to happen, there will need to be some major fundamental catalyst – such as collapse in trade talks or a major rate cutting cycle from People’s Bank of China.