The FOMC finally decided to drop the word “accommodative” in reference to its monetary policy stance thanks to inflation being around the target, unemployment below the long run level and not to mention the plethora of fiscal stimulus flowing through the economy.

So, the US Federal Reserve raised interest rates 25 basis points yesterday, as had been widely expected. The FOMC finally decided to drop the word “accommodative” in reference to its monetary policy stance thanks to inflation being around the target, unemployment below the long run level and not to mention the plethora of fiscal stimulus flowing through the economy. The FOMC’s dot plots point to one more rate increase in December, three in 2019, and one more in 2020. Our full FOMC recap is HERE.

With the market being a little bit more convinced that the December rate increase is now very likely, the Dollar Index has risen as a result.  However, the USD/JPY was once again unable to break through that 113.00 resistance level in the immediate aftermath of the Fed’s rate hike decision yesterday. This has led to some analysts calling for a double top reversal pattern. However, thus far, the selling pressure has been mild and so a near-term breakout still remains on the cards. Indeed, the long-term charts still point to higher prices with the monthly showing a clean breakout above a long-term bearish trend line. We therefore anticipate to see higher prices until the long-term charts suggest otherwise.

On the lower daily time frame, it may be reasonable to expect the USD/JPY to pause and pullback a little from the 113.00 resistance. But with the underlying trend being bullish, we can’t possibly be bearish yet – not until there a distinct reversal pattern is formed or a breakdown in the market structure of higher highs and higher lows is seen. Specifically, if rates were to eventually break below 110.40 – the last significant low prior to the latest rally – only then will we get bearish. That’s unless something else happens at higher levels first.

But just to be clear, we are looking for a bullish breakout here. That’s not just because of technical reasons. The Fed and BoJ’s diverging monetary policies means fundamentals point to significantly higher prices in the long term as US yields become more attractive than their Japanese counterparts with rising interest rates. 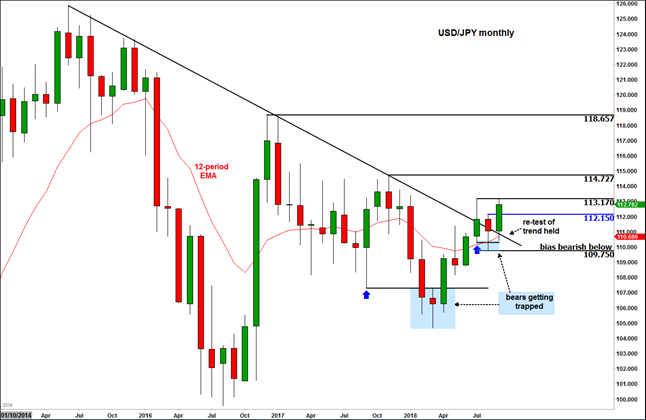 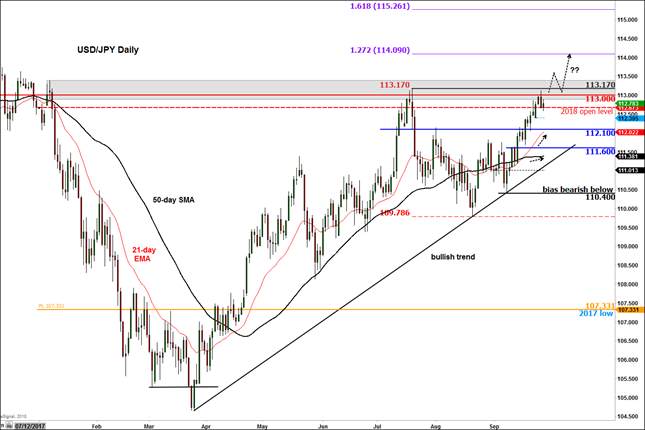