The Japanese yen has been outperforming again of late because of the ongoing weakness in the stock markets, boosting the appeal of the perceived safe haven currency.

The Japanese yen has been outperforming again of late because of the ongoing weakness in the stock markets, boosting the appeal of the perceived safe haven currency. Although the USD/JPY has until now held its own relatively well, other yen crosses have been falling noticeably. The AUD/JPY, for example, has been among the weakest, with the AUD falling along with Chinese equities. Likewise, the NZD/JPY has been another weak pair, while the GBP/JPY and EUR/JPY have also joined the sell-off thanks to ongoing political troubles in Europe (owing to the Brexit backstop stalemate and Italy’s budget). But could the main USD/JPY pair be the next domino to fall? We wouldn’t bet against it given the ongoing weakness in the stock markets.

Technically, the USD/JPY is looking overall weak because of the fact it couldn’t hold above the pivotal area between 112.58 and 113.15 following its breakout at the end of September. That false breakout has already led to a sizeable downward move, although in recent trade the USD/JPY has found some support off its bullish trend line and 50-day moving average around 111.65-85 area. Thus, going forward, if this trend line were to break down then we could potentially see a sharp acceleration to the downside. However, if the trend line holds and price eventually reclaims that pivotal 111.65-85 area, then in this case things would look bullish again. 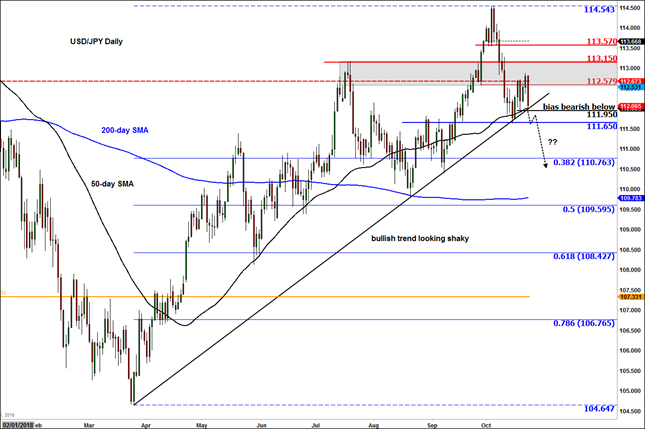