Week Ahead: Brexit, Vaccines, and Stimulus

With a possible Brexit deal and continued positive talk of vaccines, the markets could be volatile this week.

“How much longer?” asks the child from the back seat of his car.  This is how many people feel as we wait for a Brexit deal to “get there”.  No one knows for sure, and headlines on Friday confirm that.  From comments that “trade talks to resume later today” (good) to “chances of trade deal receding” (bad), no one seems to know where things stand.  Vaccine talks are all the rage these days, as pharmaceutical companies race to be the first to get a vaccine out.  In addition, the US seems to be on a path towards stimulus by year end, albeit much smaller than anticipated.  Also, the ECB and BOE meet this week.  The ECB has already signaled they will provide some form of stimulus.  The BOC has not indicated as much.

We’ve said this many times before:  A Brexit deal could come as soon as this weekend, however there are still 3 main issues keeping both sides deadlocked.  They are:

As deadlines pass, there are always new deadlines set forth.  The deadline talked about this week is December 10th and 11th, which is the EU Summit.  Both sides are hoping to have a deal to announce, while the language is put together for a vote at the final EU Parliament meeting of the year on December 17thand 18th.  However, according to the UK government, the EU is making new demands from the UK after sensing an end is near. Talks are expected to continue through the weekend, with UK’s Johnson and EU’s von der Leyen  expected to try and wrap things up.  If a deal is reached, or if a deal is considered unattainable, watch for volatility in GBP pairs and EUR pairs on the Monday reopening.

Vaccines will be here by the end of 2020! Pfizer caused some minor volatility on Thursday when they said they were having a problem with raw materials.  However, this was apparently old news and stocks continued higher on Friday.  The UK has already approved Pfizer-BioNTech’s covid vaccine and is ready to give it to people over 85 years of age and frontline workers.  The UK has been hit hard by the virus, just emerging from a four-week lockdown on Thursday.  Astrazeneca has also applied for emergency use of its vaccine and is waiting for the green light.  Watch for more headlines this week and more companies to announce vaccines.  One thing seems for sure; these vaccines better work as markets are already seemingly looking past the covid days.  Stock market indices are at or near all-time highs!

US politicians insist they are continuing to try and get some sort of a stimulus deal done.  At last glance, a bi-partisan House put together a deal worth $908 billion.  However, Senate leader Mitch McConnell said President Donald Trump would never go for it and that both sides will continue to negotiate in good faith.  President-elect Joe Biden said any deal this year will not be enough, and congress will need to act again in January.  Although we know stimulus is coming down the line, the closer we get to year-end, the less likely it is for a deal before Joe Biden takes office.  There is little incentive for the Democrats to fight for a small amount when they know more is coming in January.

The ECB gathers on Thursday at the December Interest Rate Decision meeting.  With the possibility of no fiscal action by the European Members, the ECB has already indicated they will act via monetary stimulus.  There are calls that the ECB could extend emergency measures for another year, which would be mid-2022, and expand the bond buying program by an additional 500 billion Euros.  There is also the possibility of cutting rates further (from -0.50%!).  One thing for sure is that the ECB cannot be happy with the EUR/USD exchange rate above 1.2000.  Watch for the central bank to increase stimulus and try and talk down the Euro at the press conference to follow.

As mentioned earlier, in addition to the ECB meeting this week, there will also be an EU Summit.  Much of the talk for the summit is about Brexit.  However, member nations also must try and determine to persuade Poland and Hungary to approve the budget, which includes the $750 billion euro stimulus for covid.  Thus far, Poland and Hungary have said they will continue to veto the seven-year budget, which they claim is punishing them for their conservative values.

The Bank of Canada also meets this week.  Canada is also dealing with lockdowns and restrictions due to the coronavirus.  The BOC already has set interest rates at 0.25%.  The BOC is not expected to cut rates or increase its bond purchase program, especially with stronger than expected employment data on Friday.  However, the Canadian Dollar is at its strongest level vs the US Dollar since October 2018, near 1.2780. Watch for the BOC to try and talk down the Canadian Dollar.

There is company news out later this week as well, as AirBNB and Doordash have their long-awaited IPOs.  In addition, Adobe, Oracle, Costco and Broadcom report earnings.  Also, Ocado, Rolls Royce and Bellway will provide trading updates.

Along with the ECB and the BOE meetings this week, the economic data to watch are primarily Germany’s ZEW and China and US inflation data.  Other important economic data this week is as follows:

Chart of the Week: Daily GBP/USD 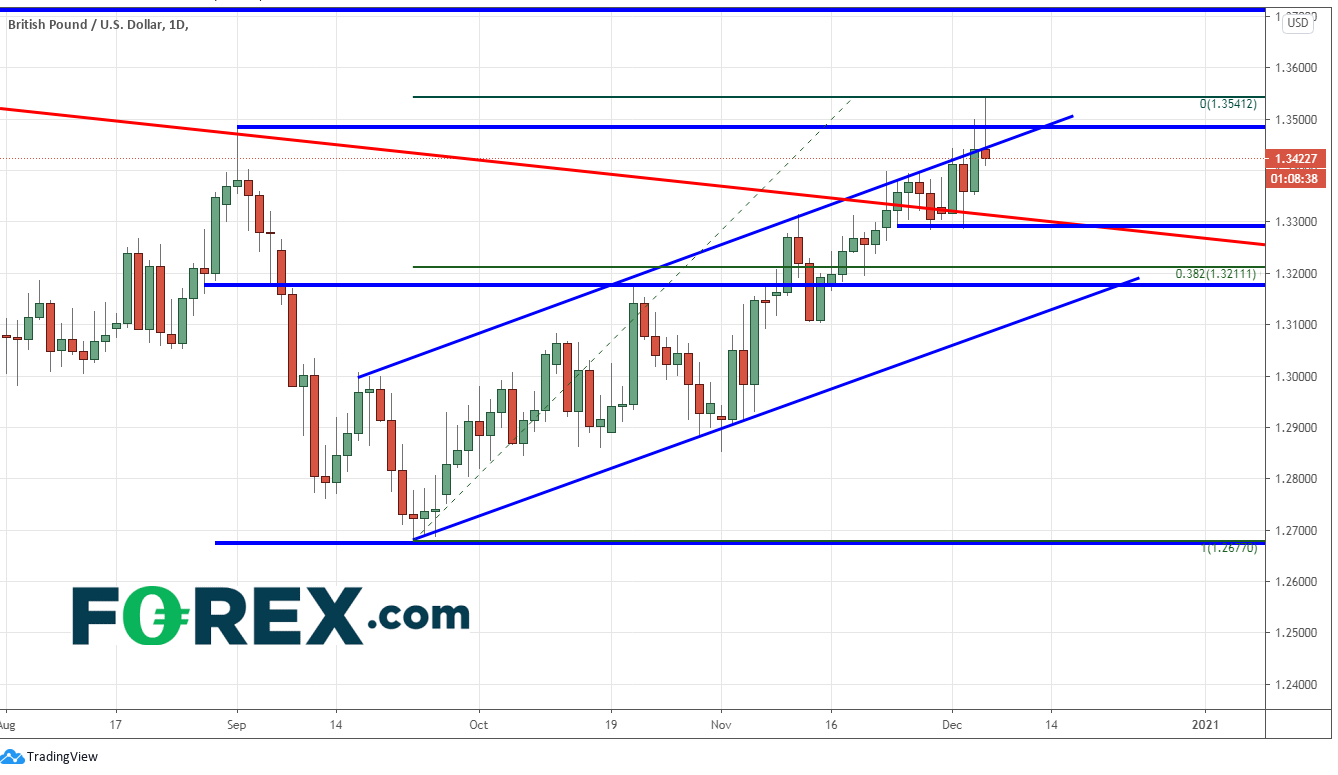 With an endgame near in Brexit (allegedly), the daily GBP/USD chart has come into focus.  The pair has been trading in an upward sloping channel since the lows of 1.2675 on September 23rd.  On November 24th, the pair closed above a 13-year downward sloping trendline (red line) dating back to October 2007! Earlier this week, GBP/USD broke about both the upward sloping trendline of the channel and the highs from September 1st at 1.3483.  Friday’s price action shows that the pair opened near the lows of the day, rallied 100 pips into new recent high territory, and failed, closing a few pips lower than it opened near 1.3420.  This daily candlestick is called a shooting star and is a one candle reversal formation.  If Monday’s close is near 1.3360, the pattern will be an evening star formation, and is even more bearish for price action.  First support is the 1.3360 level, then the downward sloping 13-year trendline (red) and horizontal support near 1.3300.  Below there, support is at the 38.2% Fibonacci retracement level from the September 1st lows to Friday’s highs near 1.3211.  Resistance is at Friday’s highs near 1.3540.

With a possible Brexit deal, continued positive talk of vaccines, and more stimulus coming our way, the markets could be volatile this week.  Some volatility will be welcome in the market as it gives traders more opportunities.  Watch the headlines, and make sure to use appropriate risk/reward for you trades.

Have a great weekend and please remember to always wash your hands!