In contrast to the Fed, the Bank of England has said that the peak interest rate is likely to be lower than implied by financial markets. This was the main takeaway point from the just-released policy statement, as the BoE decided to hike interest rates by 75 basis points, lifting the OBR to 3.00% from 2.25% previously. There were 2 dissenters at the MPC, one (Dhingra) calling for a 50-bps hike, the other (Tenreyro) for 25. Overall, it had a “dovish hike” written all over it, and the initial reaction in the markets made sense. The FTSE bounced some 30 points off the lows while the GBP/USD fell to below 1.12 handle.

The BoE is worried that if it follows the interest rate projections of the market, this will cause a recession:

With economic growth likely to be lower, inflation is likely to fall quicker. The BoE has therefore slashed its inflation forecasts:

The BoE’s decision comes hot on the heels of the FOMC meeting the day before, which saw the dollar power higher, and stocks lower. The BoE’s decision has been somewhat expected, with some analysts either calling for a smaller rate hike than expected or a lower terminal rate. The BoE has decided to opt for the latter, after hiking by 75 bps and signalling more hikes to come "albeit to a lower peak" than 5.2% priced into markets.

It was a totally different message to Jay Powell, the Fed Chair, who last night suggested that the terminal rate is going to be higher than previously anticipated, something which sent shockwaves across the financial markets as stocks, bonds and gold all tumbled.

Until the FOMC decision on Wednesday, the cable had been able to remain supported around the 1.15 handle after climbing sharply off its all-time lows in recent weeks, while the EUR/GBP and other pound crosses also stabilised, thanks to the somewhat positive political situation in the UK and calmer tone across the financial markets in general.

But in light of the dovish rhetoric from the BoE and hawkish message from the Fed, there is a risk we could see the GBP/USD start heading towards 1.10 handle, and potentially even lower. With the short-term bullish trend line and support at 1.1250 broken, the technical path of least resistance is certainly not to the upside right now. 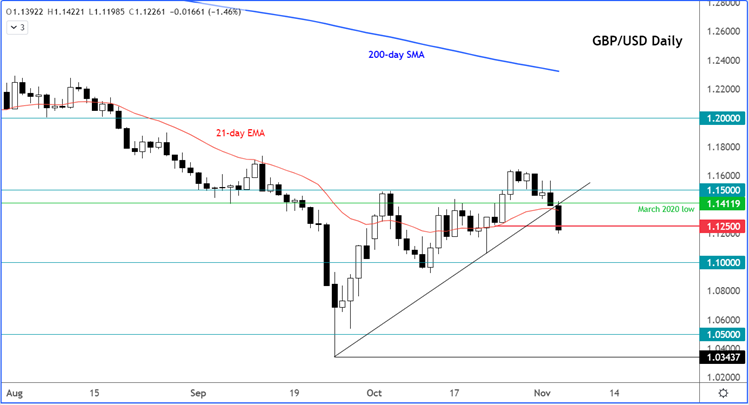 Latest Research
NFP preview: Is the jobs market FINALLY slowing?
Two trades to watch: EUR/GBP, Gold
China PMI’s disappoint, Jerome Powell in focus
Australian inflation fell… but just ‘weight’ a minute
Canadian Q3 GDP surprises to upside but the Canadian Dollar moves lower
Inflation Is the Solution: The Wisdom to Accept What We Should Not Change