The Bank of England meets this week to discuss interest rate policy.  Expectations are that the central bank will hike 50bps, however some are holding out hope for a potential 75bps. The BOE was one of the first central banks to issue a recession warning, which it said would begin in Q4 of 2022 and last until Q4 2023.  Retail Sales MoM for August released last week decreased by 1.6% vs an expectation of only -0.5% and a July reading of -0.4%.  The Ex-Fuel reading was also -1.6% vs -0.7% expected and +0.4% in July. However, the inflation rate is still running extremely high. Although the August YoY reading was better than the 10.2% expectation at 9.9%, there’s nowhere to hide such a high reading. The core reading was as expected at 6.3% YoY vs a 6.2% YoY reading the prior month.  What may help make the BOE’s decision a little easier is this week is the new PM Truss Liz announced a new energy policy that would cap energy bills at GBP 2500 per year for 2 years.  This should help to contain rising inflation.  The BOE said as its last meeting that it expected inflation to reach as high as 13.3% YoY in October!  However, given the cap, inflation may not rise as much as previously anticipated.  Therefore, with a possible recession looming and the potential for lower inflation moving forward, the BOE may only be inclined to hike 50bps on Thursday.

The US FOMC also meets this week on Wednesday.  Last week’s August inflation spooked the markets into pricing in the possibility of a 100bps rate hike this week!  The YoY print was 8.3% vs 8.1% expected, although it was lower than July’s 8.5% YoY.  However, what really scared that market was the Core Inflation Rate YoY, which was 6.3% vs 6.1% expected and a July reading of only 5.8%!  This means that more of the overall inflation is becoming embedded in the markets and isn’t just coming from food and energy anymore.  The US still has strong jobs numbers, with the August NFP print at +315,000 and Initial Jobless Claims decreasing for the 5th consecutive week to 213,000 for the week ending September 10th.  However, given the slightly weaker inflation components of the Michigan Consumer Sentiment preliminary reading for September, expectations of a 100bps have backed off, with the markets only expecting a 20% probability (which means an 80% probability of a 75bps hike).

GBP/USD has been moving lower since May 2021 when price traded near 1.4250.  However, the decline picked up steam when the pair broke the 1.3000 level on April 22, 2022. Since then, GBP/USD has been moving aggressively lower in a downward sloping channel and reached its lowest level since 1985 on Friday at 1.1350.  The pair is currently hovering around those t985 levels and the 161.8% Fibonacci extension from the low on July 14th to the high of August 1st near 1.1417.  If GBP/USD is to continue lower, the first support is at the bottom of the channel near 1.1310.  Below there, the next support isn’t until the 1985 lows at 1.0520!  However, notice that the RSI is diverging with price.  This indicates that price may be ready to bounce in the short-term.  First resistance is at the highs of September 13th at 1.1442 and then the highs from August 26th at 1.1901.  Above there, the GBP/USD can move to the top, downward sloping trendline of the channel near 1.2080. 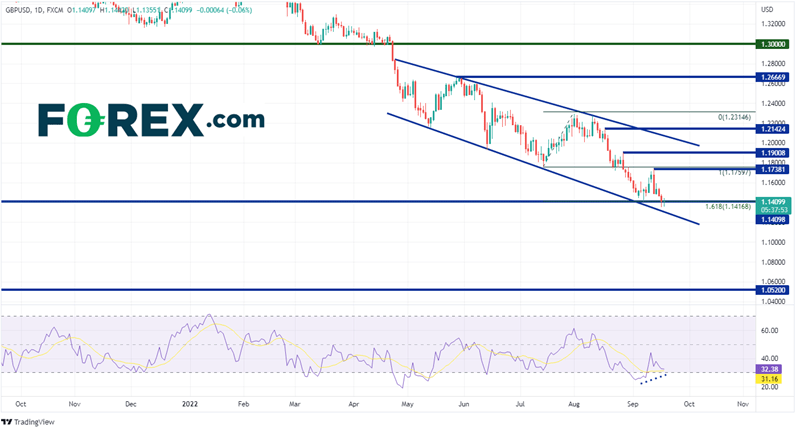 With both the FOMC and the BOE meetings this week, GBP/USD could be in for quite a bit of volatility.  Will the FOMC hike 75bps or 100bps?  Will the BOE hike 50bps or 75bps?  Recessions could be right around the corner, so these 2 central banks have some very important decisions to make!