The Eurozone CPI was finalized on Wednesday at 9.9% YoY for September, just a tick under double digits and the initial estimate of 10% YoY.  However, recall that the August reading was only 9.1% YoY.  The ECB meets next week, and consensus is that the central bank will raise by 75bps to bring rates to 1.25%.  Recall that at the September meeting, the ECB surprised markets and raised by 75bps vs an expectation of only 50bps.   The RBA meets on November 1st.  As with the ECB, the RBA also surprised the markets at its last meeting vs the expectation of 50bps.  However, the RBA only hiked 25bps!  Minutes released on Tuesday showed that the central bank still intends to hike rates due to rising inflation (which it expects to peak around 7.75%), however the size and the timing will be dependent on incoming data.  The RBA’s Bullock also pointed out that the RBA meets more frequently than many of its peers, and therefore, it can achieve the same tightening with smaller individual rate increases. Fair point, however, markets are currently only expecting another increase of 25bps on November 1st.

EUR/AUD reached its lowest point since April 2017 on April 5th, 2022 at 1.4320.  The pair then bounced to 1.5398 on July 1st, only to pull back and retest the lows on August 25th.  EUR/AUD reached a new low of 1.4283, but this proved to be a false breakdown and set the case for a double bottom with a neckline at 1.5398.  The target for a double bottom is the height from the bottom to the neckline, added to the breakout point above the neckline.  In this case the target is near 1.6550.  After testing the lows, the pair immediately bounced and reached the neckline on October 4th (the day of the last RBA meeting).  On October 10th, EUR/AUD broke aggressively above the neckline and is on its way to target.  However, the pair ran into resistance near 1.5706, which is the 127.2% Fibonacci extension from the highs of July 1st to the lows of August 25th. 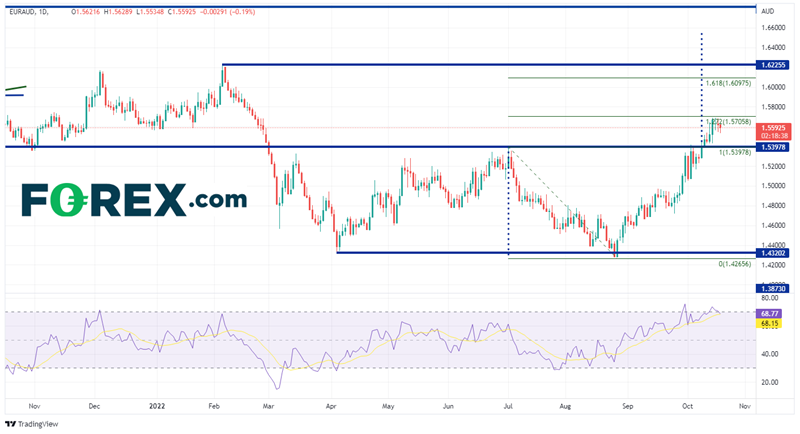 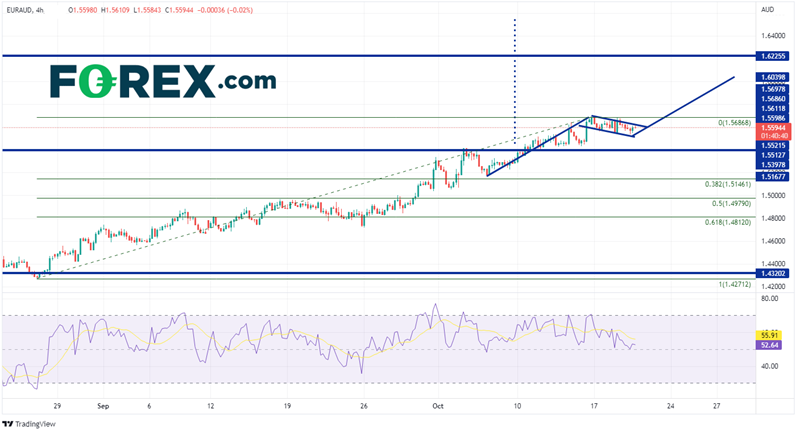 EUR/AUD has been moving higher on the back of interest rate differentials.  Will it continue if the ECB hikes 75bps next week and the RBA only hikes 25bps the week after?  If so, the pair could be on its way to not only the flag target on the shorter-term timeframe, but also the double bottom target on the daily timeframe!