European and US PMIs weaker; EUR/USD remains near parity

PMIs out of Europe and the US are causing EUR/USD to remain near parity as fears of recession increase.  The overall European Manufacturing PMI Flash reading for August was 49.7 vs 49 expected and 49.8 last.  This was the lowest reading since June 2020.  Although the Manufacturing print was just about as expected, it is still weaker than July’s reading and remains under the 50 expansion/contraction level.  However, it was the European Services PMI that brought the composite PMI lower.  The Services PMI Flash reading for August was 50.2 vs 50.5 expected and 51.2 in July. This was the lowest print in over a year.  The overall European composite PMI was 49.2 vs 49 expected and 49.8 last. Once again, this is under all-important 50 level.  In addition, this was the fourth consecutive decline for the Composite reading.

In the US, the results were weak as well.  The Manufacturing PMI Flash reading for August was 51.3 vs 53 expected and a July reading of 52.2.  This was the lowest reading since July 2020.  However, the Services PMI was awful at 44.1 vs and estimate of 49.2 and a prior reading of 47.3.  This is well under the 50 expansion/contraction level and the lowest reading since May 2020.  This brought the composite reading down to 45 vs and expectation of 49 and a July reading of 47.3!

With the US PMIs weaker than the Europe’s, EUR/USD has made its way up to parity.  The pair has been moving lower in a long-term descending channel since February 10th, when it was trading near 1.1495.  On July 5th, the pair broke aggressively through support at the lows of January 2017 near 1.0340.  EUR/USD then continued lower to below parity on July 14th, while also testing the bottom trendline of the channel.  The trendline support held, and the pair moved to a confluence of resistance at the previously mentioned 1.0340 level, the top downward sloping trendline of the channel, and the 50% retracement level from the highs of June 9th to the lows of July 14th.  Since then, EUR/USD has resumed its move lower, reaching a 20 year low today at 0.9900. 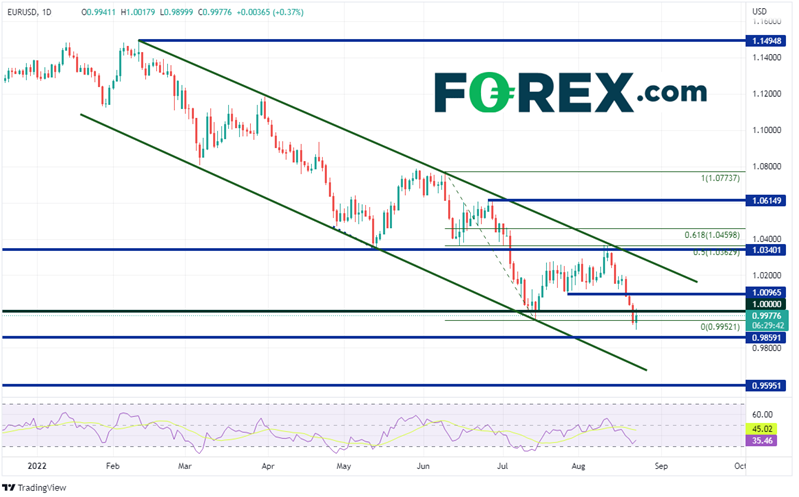 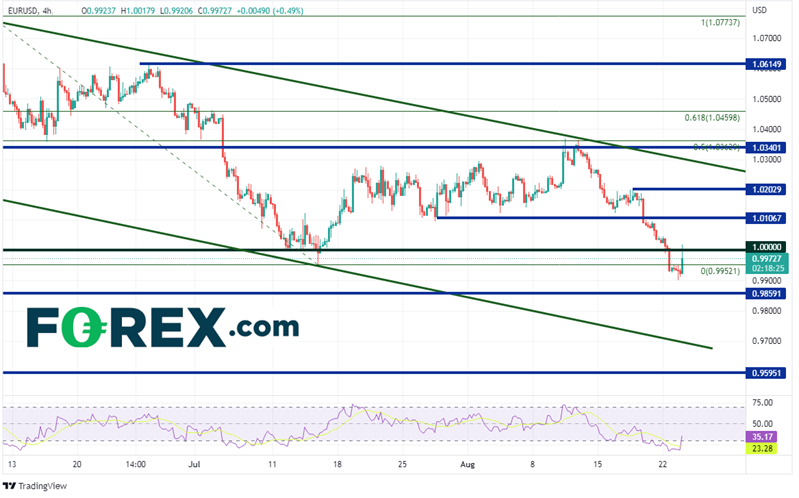 Today’s PMI Flash readings from Europe and the US were both bad.  With the Jackson Hole Symposium this Thursday and Friday and the Fed stating that it is “data dependent”, the US data matters more at this point. Watch for a possible weaker US Dollar heading into the end of the week on the back of potential profit taking ahead of Fed Chairman Powell’s speech on Friday.