We’ve already been waiting months for this Fed decision, so we’ll cut straight to the chase.

As we anticipated in yesterday’s FOMC preview report, the central bank cut interest rates by 25bps to the 2.00-2.25% range. The Fed also announced that it would cease its balance sheet drawdown program (“Quantitative Tightening”) tomorrow, a full two months earlier than previously suggested.

In the accompanying monetary policy statement, Fed policymakers cited "the implications of global developments for the economic outlook as well as muted inflation pressures" as supporting its decision. Crucially, the statement maintained the phrase about acting “as appropriate to sustain the expansion,” which many analysts had seen as a signal for today’s (now confirmed) rate cut. There were two hawkish dissents to the decision, with Fed Presidents Rosengren and George coming out in favor of no changes to interest rates. 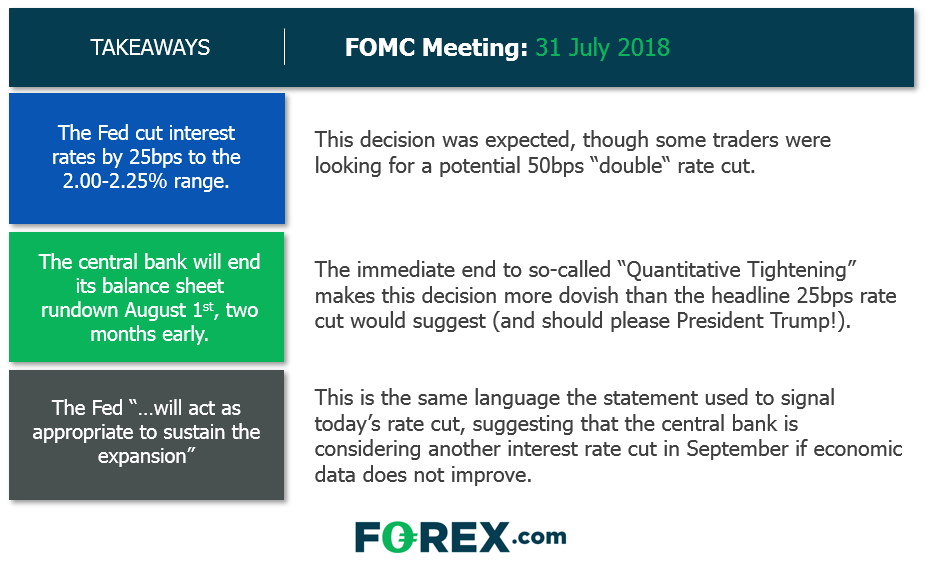 On balance, the Fed’s decision was roughly in-line with traders’ expectations, so we’ve seen relatively limited market moves so far. The US dollar has rallied by 20-30 pips against its major rivals in an initial reaction, supported by the 2bps tick up in 2-year Treasury bond yields. Meanwhile, US stock indices have slipped into negative territory on the day, though all these initial moves are relatively small.

With the market yet to draw a firm conclusion about the long-term implications of the Fed’s decision, Fed Chairman Powell’s press conference will be particularly important. If, like the statement seems to imply, he leaves the door open for another interest rate cut next month, the greenback’s initial strength may fade into the close. On the other hand, if Powell characterizes the move as more of a technical adjustment or “insurance cut,” traders may quickly abandon their dovish positions, boosting the buck and providing a stronger headwind for US stocks.