The world will forever remember 2020 as the year COVID burst onto the scene and upended (and, all too often, outright ended) lives across the globe.

While it’s unlikely that 2021 will ultimately stand out so prominently in our collective memories, traders and economists may well look back at 2021 as the year that inflation finally re-emerged after decades of relatively stable prices across the developed world.

What is inflation? See our primer on the topic!

Where do we stand with inflation?

To set the stage, inflation is rising at multi-decade highs across much of the developed world: 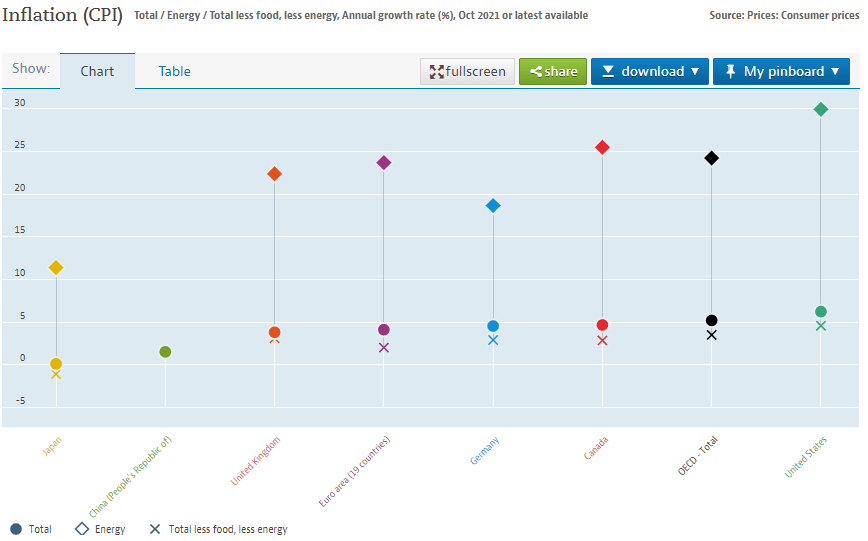 As the chart above shows, much of the current price pressure is stemming from energy prices (the diamonds), which have surged between 10% and 30% over the last year; that said, even taking out more volatile food and energy prices, so-called core inflation rates (the “X”s on the chart) remain well above most central banks’ targeted 2-3% range.

Many global policymakers have consistently characterized the price pressures as “transitory,” but that explanation is rapidly losing its luster as inflation remains stubbornly elevated, with little prospect of imminent relief, and the potential for rising prices starts to become entrenched for global consumers.

What is driving inflation higher?

The economic stimulus is easier to comprehend. In essence, everyone on the planet realized that the global economy was going into a pandemic-driven recession in March 2020, and governments and central banks therefore acted swiftly and aggressively to minimize the impact of the recession on their populaces.

Following their mandates, central banks immediately cut interest rates to 0% and most initiated asset purchase programs to inject liquidity into the financial system. Meanwhile, governments ramped up spending, in some cases outright mailing checks to their citizens and offering forgivable loans to businesses to help bridge the economy across the pandemic-driven slow period. While they were undoubtedly effective in limiting the economic damage amidst a global health crisis, these policies left many consumers and businesses flush with cash, with little to spend on.

As the economy gradually reopened in 2021, we saw consumers unleash a wave of pent-up demand, catching many businesses by surprise. The dramatic ramp up in demand, combined with ongoing economic restrictions in much of the emerging world, stressed global supply chains (see semiconductor chips) and logistic networks (see the logjam of container ships at major ports), prompting businesses to raise prices on the limited inventory they were able to secure. At the same time, due to the aforementioned stimulus payments and a general reevaluation of priorities, workers have started to demand higher wages, further exacerbating inflationary pressures from both the supply and demand sides of the equation.

Against that backdrop, what will 2022 bring for inflation?

Now that we’ve distilled the most significant inflationary drivers, we can project whether they’re likely to extend through 2022.

Once again, it’s far easier to measure and project the prospects for economic stimulus moving forward. From a monetary policy perspective, most major central banks are (arguably belatedly) shifting toward “normalizing” policy by tapering asset purchases and outright raising interest rates. These policies influence the economy with a substantial lag, but at the margin, injecting less liquidity into the financial system and raising interest rates should tamp down demand and reduce inflationary pressures, especially as we move into the latter half of the year.

Similarly, the previous fiscal policy tailwind is likely to turn into a headwind in 2022 as governments look to repair their battered balance sheets and respond to constituents’ concerns about rising prices. Using the US as one example, the Hutchins Center on Fiscal and Monetary Policy projects that fiscal policy has already shifted from boosting economic growth (real GDP) to subtracting from it, and fiscal policy is anticipated to be a headwind for the foreseeable future: 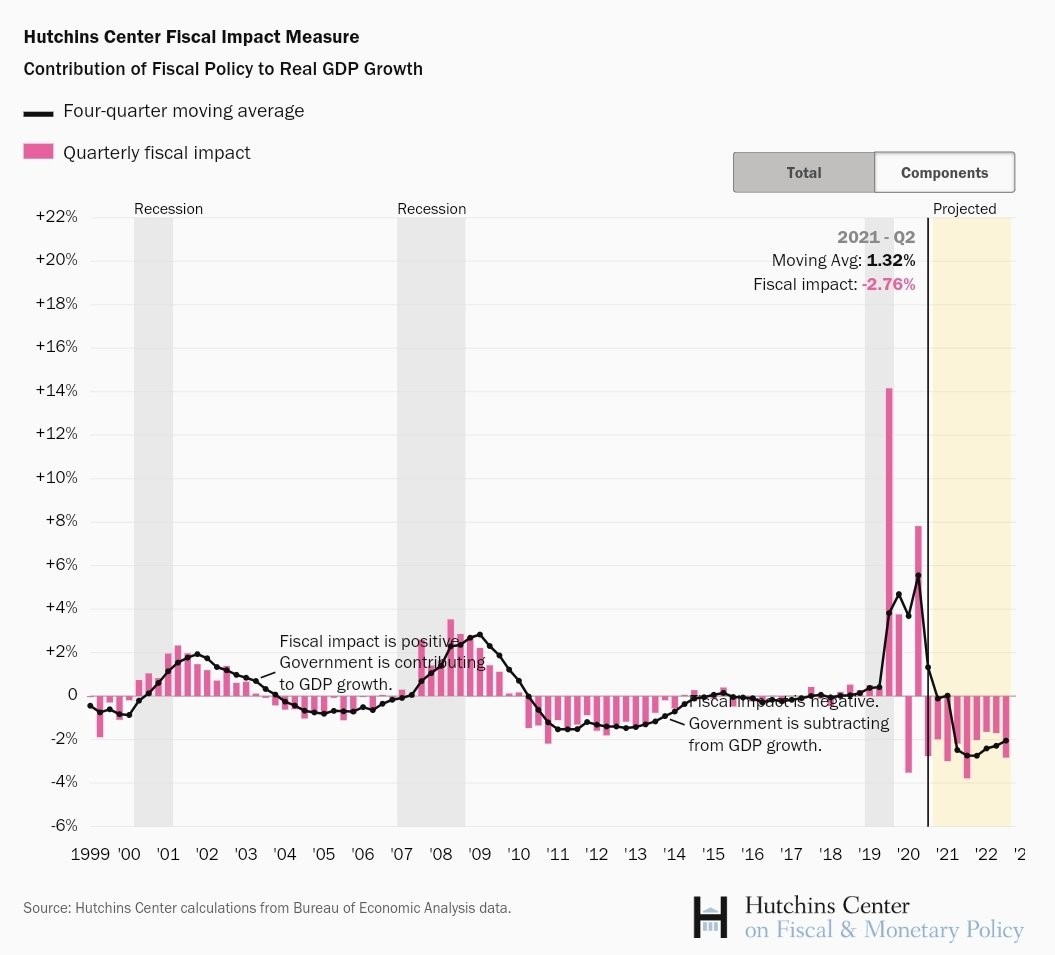 While it looks likely that the policy stimulus component of inflation is already fading (and will continue to diminish throughout 2022, barring any surprises), the supply chain situation is far more difficult to disentangle. At a high level, capitalist economies have a strong incentive to minimize costs and maximize profits, so from that very basic perspective, there’s reason for optimism that global supply chains will be in a much better position in a year from now than they are now.

Unfortunately, given the damage wrought by the ongoing pandemic, the path back to that lower-inflation future is likely to be far from smooth. To take one example, experts expect the semiconductor shortage to recede throughout the year, with lag times on orders gradually declining as the production process “catches up” with surging demand. On the other hand, the persistent logistics and transportation delays have laid bare the risks of “just-in-time” inventory management; accordingly, we expect “reshoring” to be a major theme in 2022 as corporate executives place a greater value on the resilience of their manufacturing processes, rather than the potential efficiency gained from offshoring to the cheapest possible source and taking on myriad risks from rising shipping costs to outright supply shortages. If this theme gains steam as we expect, it could keep pushing prices higher for years to come.

The final, most mysterious, factor driving inflation in 2022 will be consumer sentiment. Already, we’ve seen the damage that inflation can cause on the psyche of global consumers (and politicians across the developed world are already starting to feel its bite as well). The longer price pressures linger, the more likely they are to become entrenched as consumers accelerate their purchases of goods to “beat” price increases, and by doing so, bring about the very shortages and inflation that they fear in a vicious cycle. While we remain skeptical toward fears of runaway “hyperinflation” anywhere in the developed world, there’s absolutely a risk that mid- to high-single-digit price increases become entrenched

2021’s rise in inflation has already had a dramatic impact on global markets, from commodities (as seen in the roughly 40% annual increase in the diversified Invesco DB Commodity Index) to equities (as seen in the crash of many currently-unprofitable growth stocks with earnings expected in the distant future), but the most direct impact of inflation can be seen in the price of bonds, or conversely, the level of interest rates across the globe.

Interest rates generally edged higher in 2021, with a clear trend of rising rates in the first half of the year morphing into choppy, range-bound trade in the second half. The chart below shows the benchmark 10-year sovereign bond yields for the US, UK, Germany, and Australia all tracing out a similar pattern: 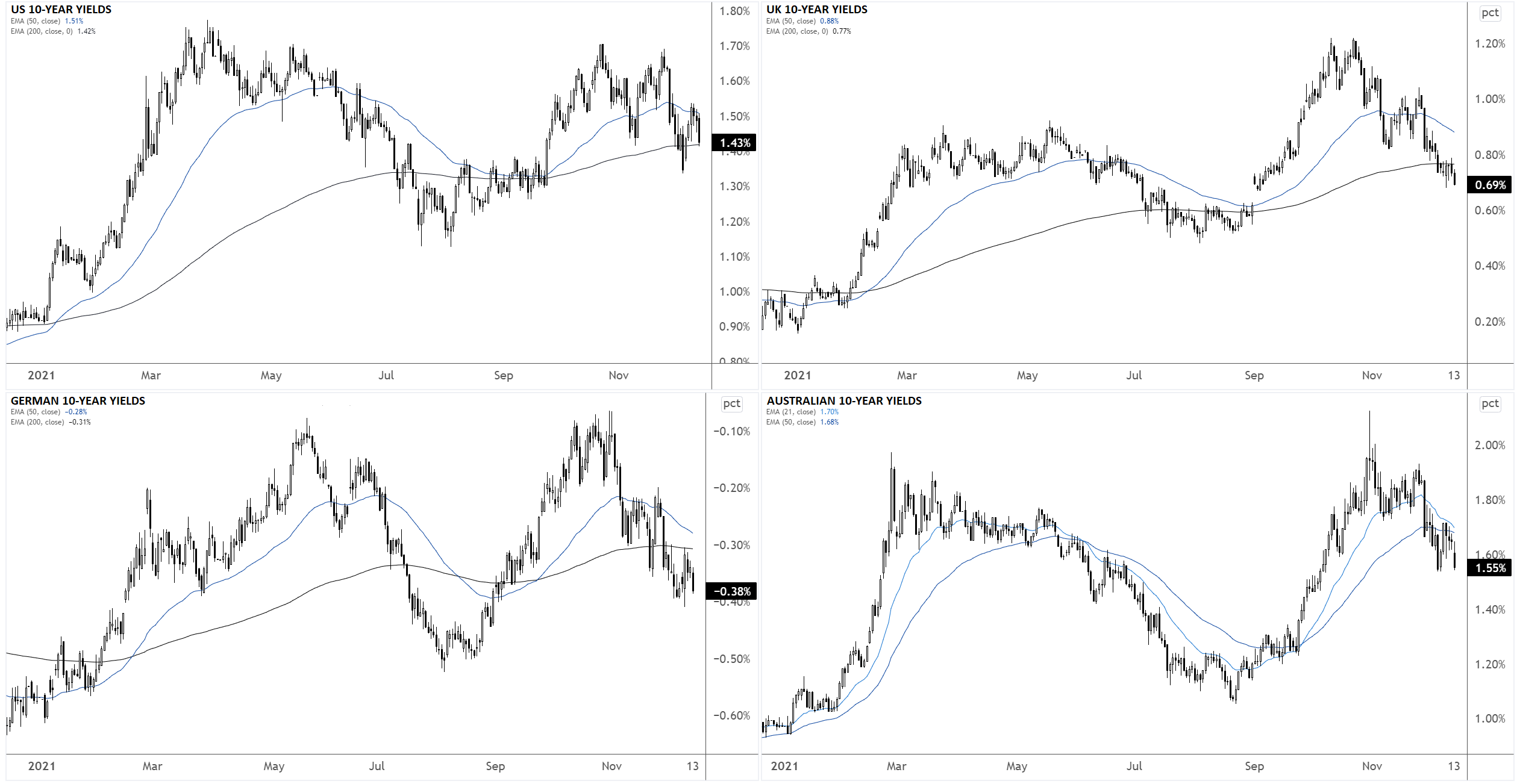 Notably, the yields on short-term bonds rose more rapidly and consistently throughout the year, especially in the US, UK and Australia, suggesting that traders believe those central banks will act aggressively (read: raise interest rates) to mitigate inflationary pressures.

On balance, we expect global yields to edge higher through 2022 as most major central banks move more aggressively toward “normalizing” their policy rates, with more proactive central banks (the BOE, Fed, and RBA for example) driving a bigger spike in yields than more cautious central banks (the ECB and BOJ).

Even if you don’t trade interest rates directly, it’s worth understanding the general trend and macroeconomic factors at play given their close relationship with other markets including forex, equities, and commodities.

GBP implied volatility spikes ahead of UK CPI and FOMC
By:
Matt Simpson

US CPI surprises for the second month in a row. What does it mean for the Fed?
By:
Joe Perry CMT