By :
Fawad Razaqzada
,  Market Analyst
Gold has come off its earlier highs after adding another 0.6% to its gain of around 1% in response to a somewhat dovish rate hike by the Fed the day before. Insofar as today is concerned, investors are looking ahead to the release of US GDP and lots of US company earnings in order to gauge the strength of the world’s largest economy amid concerns it may already be in a recession. A bit of profit-taking may well be the reason for the small pullback form the highs. Precious metals have rebounded despite the latest sharp interest rate hike. This is at least partly because of expectations that inflation will soon peak and that the economy will deteriorate further, which points to a contractionary monetary policy stance from the Fed in 2023 and beyond. However, it remains to be seen whether this rebound will turn into a major rally for the metals or is just another short-covering bounce in what still is a bearish trend for both gold and silver.

The key takeaway point from the Fed’s rate decision on Wednesday was Powell indicating that the pace of interest rates hikes will slow, and that future hikes will depend on incoming data. “While another unusually large increase could be appropriate at our next meeting, that is a decision that will depend on the data,” Powell said.

With inflation continuing to eat into consumers’ disposable incomes and profit margins of businesses, there is a growing feeling that the Fed’s aggressive tightening will see the US fall into a recession. Is the US already in a technical recession? Output fell 1.6% in Q1 in an annual format. Another negative print means technical recession. But economists expect to see a modest annual growth of 0.4% in Q2. The data is due for release at 13:30 BST.

There will be plenty of more data to look forward to in the week ahead, including the nonfarm payrolls report, even though jobs reports have not been having the same impact on the markets because the focus has been on inflation and the economy. But if we start to see weakness in employment again, then this will further worry investors about the health of the world’s largest economy. For now, the Fed sees the labour market as being “extremely tight.”

So, the dollar – and gold – will be very sensitive to incoming US data. 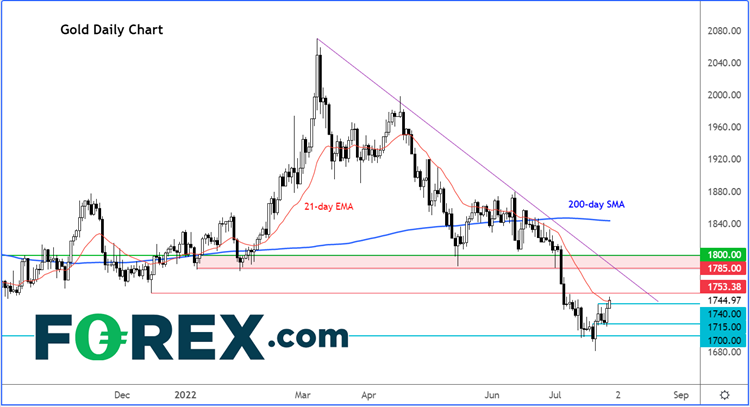 The turnaround came last Thursday when it formed a bullish engulfing candle after an earlier dip below long-term support at $1700 didn’t hold. Since then, gold went on to gain further ground before going into a consolidation phase ahead of the Fed meeting. Wednesday’s breakout means the bulls won that battle and now have the upper hand in terms of short-term control of price action.

From here, gold could go on to rise towards the more significant resistance area between $1785 to $1800, where previous support meets the bearish trend line, as per the chart.

Short-term support now comes in around $1740, which was last week’s high.