With global stocks staging a short-covering bounce today, gold has given back some of its sharp gains made yesterday. Unsurprisingly, so too have safe-haven yen and franc. Clearly, gold, like equity indices, has become a headline-driven market. Investors must remain vigilant. Incoming headlines regarding the ongoing US-China trade dispute, and specifically Donald Trump’s tweets, have led to some sharp moves in recent days. Presumably worried about the recent sell-off, stock market hawk Trump has changed his tone slightly. He sounded a tad more conciliatory today towards China. But I reckon investors are slowly becoming aware of Trump’s tactics. His words will have diminishing returns in terms of market impact. For that reason, I don’t think this rebound in stocks will last too long, unless the US and China do actually sign an agreement on trade.

While trade uncertainty remains, safe haven gold ‘should’ remain supported. But it is not as simple as that. Gold investors will also have to consider the impact on physical demand from China in the event of a no deal. What’s more, the higher tariffs on Chinese exports will also hurt the US consumer, further weighing on demand. So, the impact of the US-China trade war has conflicting implications for gold. This is why we prefer to just focus on price action than worry too much about the reasons why gold is going up or down.

At the time of writing, the precious metal was still holding above yesterday’s breakout level of $1291.50, which is also where the 50-day moving average comes into play. It needs to hold above this level in order to sustain its short-term bullish bias. However if this level breaks and price also moves back below Monday’s low at around $1282, then this would completely nullify the breakout. In that case, gold could then quickly drop to take out liquidity below the 2019’s double bottom low at $1266ish. But if the bulls hold their own and prevent prices breaking lower again, then in that case gold may embark on another rally that could eventually see it take out its previous 2019 high at $1346/7 next. 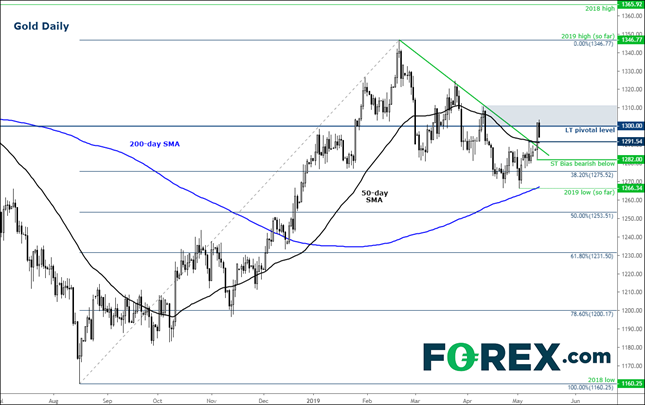