Non-Farm Payrolls underwhelm; what does it mean for the Fed?

Non-Farm Payrolls for December were much weaker than expected for the second month in a row!  The US added +199,000 jobs to the economy in December vs +400,000 expected.  (See our NFP Preview here).  Although November’s print was revised higher to +249,000 from +210,000, it did little to soften the blow of the weaker December print.  The unemployment rate dipped to 3.9% from 4.1%, its lowest level since February 2020.  In addition, Average Hourly Earnings increased by 0.6% vs 0.4% expected and 0.4% in November.  This tied the highest level since April 2021 as employers paid higher wages to fill job vacancies.

The FOMC minutes from last month stated that “most participants judged conditions for a rate hike could be met relatively soon if the recent pace of labor market improvements continued”. Heading into today’s NFP print, markets were pricing in a 70% chance of a rate hike at the March meeting.  The 2-month average NFP print is only +224,000 jobs. Although positive, if the number continues to come in weaker than expected over the next few months, it may not meet the criteria for maximum employment for the Fed to rates.  On the other hand, a 3.9% unemployment rate is very strong, and the Fed will take notice.  Chairman Powell has said that there isn’t one single data point for gauging the strength of the jobs market.  Therefore, traders need to stay tuned to future jobs data, ahead of the March meeting, to get a better sense of whether a rate hike is imminent based on “maximum employment”.

Although still confined to the 95.50/97.00 range the index has been in for nearly 2 months, the DXY did have some downward movement after the NFP print.  It broke lower, back below the upward sloping trendline of the symmetrical triangle.  Support is at the 50 Day Moving Average near 95.76 and then the November 30th, 2021 lows at 95.51.  In December, price failed to maintain its breakout about the top, upward sloping trendline of the channel (green) the index has been in since May 2021.  Often when price fails to break out of one side of a channel, it moves to test the other side.  This is the next support level, near 94.90. 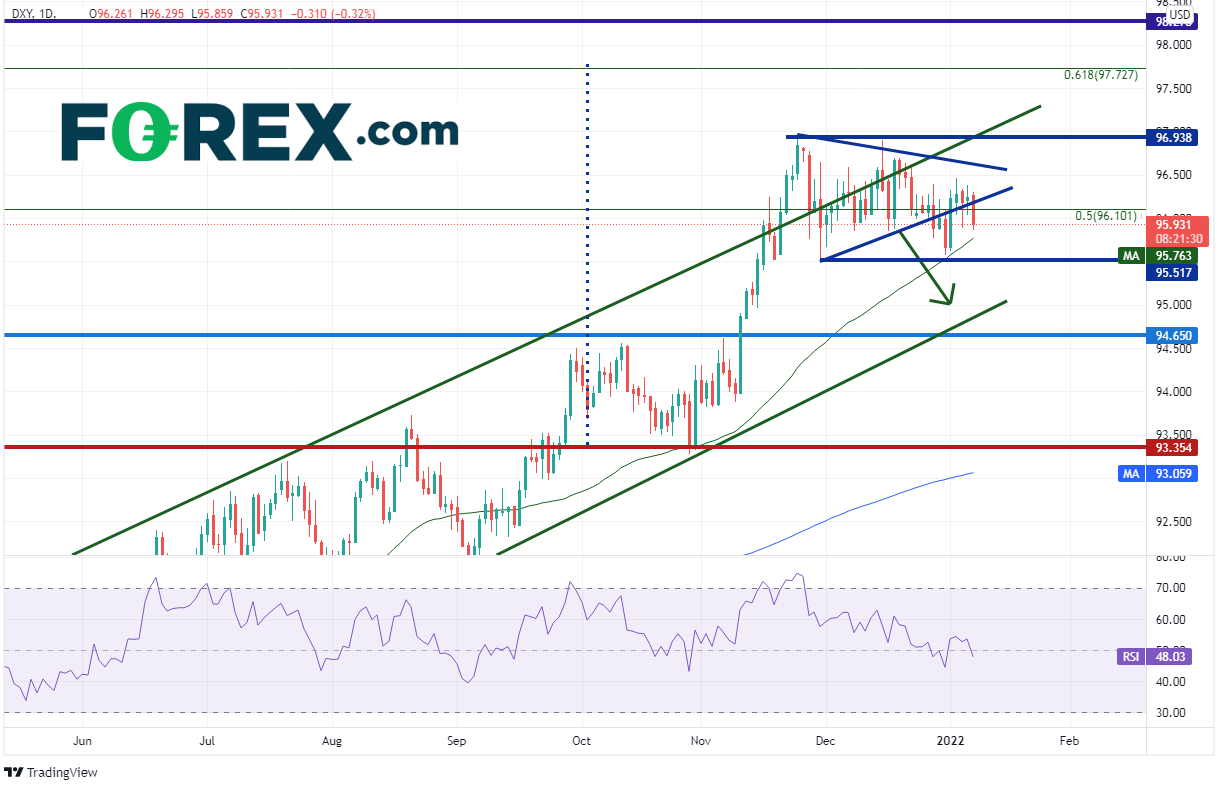 Resistance is at the top, downward sloping trendline of the triangle near 96.60.  Above there is a confluence of resistance at the top, upward sloping trendline of the channel and previous highs at 96.94, then the 61.8% Fibonacci retracement from the highs of March 2020 to the double bottom lows of 2021, near 97.73.  This also corresponds with the target of the double bottom breakout.

The Non-Farm Payroll number was disappointing.  However, was it enough for the Fed to continue to believe we are on our way towards maximum employment?  With a rate hike not expected until March, markets will have to wait for more data to find out!