Another session of small currency ranges overnight, with a lack of market-driving news worthy enough of overshadowing the mid-term election in the US. Still, the US dollar is the strongest major as it lifted itself gently from its lows, but gains were certainly capped.

The BOJ’s (Bank of Japan) summary of opinions shows that some members are thinking about the long-term effects of an ultra-loose policy and its side-effects of prolonged easing. One member concerned of an inflation overshoot. It’s a baby step, but one step closer to the BOJ being dovish as opposed to uber dovish.

Asian equity markets were higher with Wall Street on hopes of China reopening.

Donald Trump to make a “big announcement” next week

We know that Donald Trump has teased a rerun for office for 2024. But with it falling eerily quiet for quite some time it appeared it was not going to be the case. But rumours have been swirling for a few days that he’ll soon confirm that he will indeed run for presidency once more, so it is perhaps no coincidence that Trump promised to make a “big announcement” from his Mar-a-Lago resort on the 15th of November. Well, it not likely to be the release of his tax returns, is it? And if it were, my bet is it would be the “best tax return the IRS has ever seen”. So let’s just assume he’s announcing his run for presidency, if not one of his son’s (outside chance, but still more likely).

US mid-terms in focus tonight

Bipartisan analysts are calling for Republicans to take the House form the Democrats, but the Senate is a close call. If Biden walks away with the House and the Senate it would likely be nothing short of a miracle, so I fully expect his job to become harder and his administration less effective – the question is just by how much.

On one hand, a Republican led House and Senate could be a net positive for Wall Street. On the other, a seriously hampered Biden administration is likely bad for growth which could take the wind out of the sails for equity markets (once the hype dies down). Either way, stocks could be sensitive to political headlines in the US session. However, it is not until near or after market close that votes will be counted, which means a lot of the action is likely to come after market close (and make the Asian session more entertaining than usual).

On Friday I outlined a potential scenario for a run to the resistance around 0.8800 which worked out quite well. However, we’ve since seen a bearish engulfing candle on the daily chart which drove prices back to the monthly pivot point – a level I’d have consider buying dips around on Friday.

The hourly chart shows the prices are still holding above the monthly pivot point and 200-bar EMA, and bearish momentum is waning. Over the near-term, I suspect a swing low can develop and retrace against some of yesterday’s losses. Yet given the magnitude of said losses, I am also open to a lower high forming and breaking beneath yesterday’s low. Therefore, I am tentatively bullish heading into today’s session, not looking for an oversized bullish move, and also on guard for another leg lower. 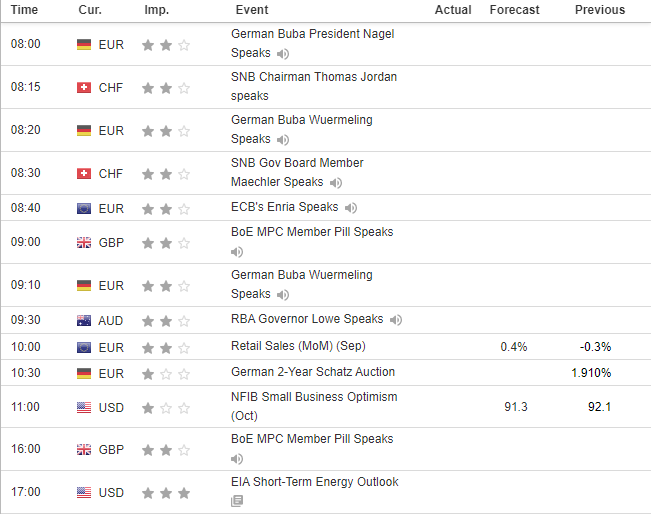