UK PM Truss ousts Kwarteng. But did PM Truss do enough to save herself?

After a month on the job, Kwasi Kwarteng is no longer the UK Chancellor of the Exchequer.  The head of the UK Treasury was asked to step aside three weeks after he announced the “mini-budget”, which sent GBP/USD to all-time lows and forced the Bank of England to intervene in the Gilt markets to save the economy. Prime Minister Truss had already scaled back part of the tax cutting plan, which called for a 45% tax cut on higher earners.  Facing additional pressure, today Truss abandoned plans to overturn a corporate tax rate, which former PM Johnson had announced, that would hike rates from 19% to 25%.

After Kwarteng’s dismissal, it appears that more of the mini budget will be scaled back.  Jeremy Hunt, the former British foreign minister, will be replacing Kwarteng.  He’ll have a tough job ahead of him as he tries to please the markets. During the press conference which followed,  PM Truss tried to drive home her message that she still intends to stick with the core commitments she campaigned: higher growth, lower taxes, and economic stability.  However, she noted that spending would grow less rapidly than previously planned.

One must consider whether the sacking of Kwarteng and a reversal of major parts of the mini budget were enough to save Truss.  After all, Truss and Kwarteng formed this tax cut plan together.  Why should he be the only one to go? Watch for calls over the weekend seeking her dismissal.

Traders may find out the answer as soon as Monday when the markets open without the benefit of the BOE back-stopping them.  The BOE had committed to buying Gilts though October 14th, and BOE Governor Bailey reiterated that date earlier this week.  It has been rumored that BOE members have held private discussions with Pension funds and said that it would continue to support them, however there were no official comments.

The Pound sold off with the news of Kwarteng’s departure. Was this a “buy the rumor, sell the fact”, “too little, too late”, or was it just that the markets have lost faith in Truss all-together?  Gilt yields were little changed on the Kwarteng news, however they moved higher and filled the overnight gap after the press conference, with the 30-year Gilt moving to into resistance at 4.68%. 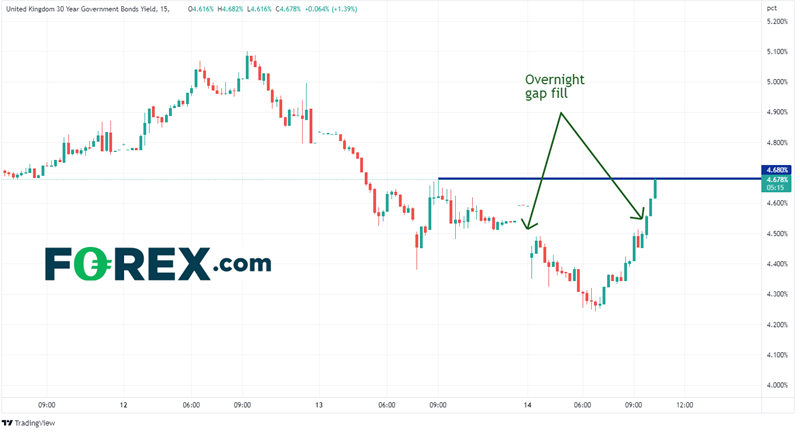 Markets will be searching for answers next week as to “What’s next?” for Truss.  Has she done enough to save her political life?  Traders may find out as soon as the reopening on Monday when the BOE has said it will step out of the Gilts market.  If rates continue to rise, Truss may be in trouble.