USD/CNH almost at 7.00 as concerns over China intensify

Another day, another piece of bad news from China. This time, it was the nation’s trade figures which disappointed expectation. The yuan fell further, sending the USD/CNH to almost 7.0000, while other risk assets from stocks to crypto all declined. The very poor imports figure in particular raised concerns about how weak the Chinese economy has become as it faces troubles from multiple sources. These include the ongoing COVID-related lockdowns and a property sector which has collapsed under the weight of debt. When China sneezes, the world usually catches a cold – and that’s precisely how the markets have reacted so far.

In case you missed it, China’s exports and imports figures were well short of expectations, pointing to weakening domestic and foreign demand. Imports were up just 0.3% on the year in August, a sharp fall from the +2.3% annul reading recorded the month before. Exports were +7.1% y/y, again sharply lower compared to 18.0% recorded in July.

These trade numbers only add to a growing list of concerns about the health of the global economy and provide more reasons for investors to shy away from taking on risk. The data also underscores the view that the world’s second largest economy is weakening more than expected.

The USD/CNH has been rising steadily as monetary policy divergence between the US and China continues to grow. Whereas the Fed is tightening its belt with aggressive rate increases, the PBOC was recently been forced to cut interest rates as data showed the economy was losing steam due to renewed Covid lockdowns and a deepening property downturn. But with the yuan weakening so significantly, the PBOC has tried to stem its decline by using other tools including stronger fixings for the yuan and this week it trimmed forex reserve ratio to 6% from 8% in a bid to support its currency. The move in theory should increase the supply of foreign currencies, thus making it more appealing for market participants to buy the yuan. However, given China’s zero Covid policy, more lockdowns are likely. So, we expect the yuan to fall to 7 per dollar in the next few days – and maybe more

On a technical front, there’s are no obvious signs of a reversal yet, so we may see the USD/CNH continue its upward trajectory. The next bullish target is 7.00, where the psychologically-important handle will meet the 78.6% Fibonacci retracement level against the drop from the June 2020 peak. That peak was made at 7.1965, which will be the subsequent target. 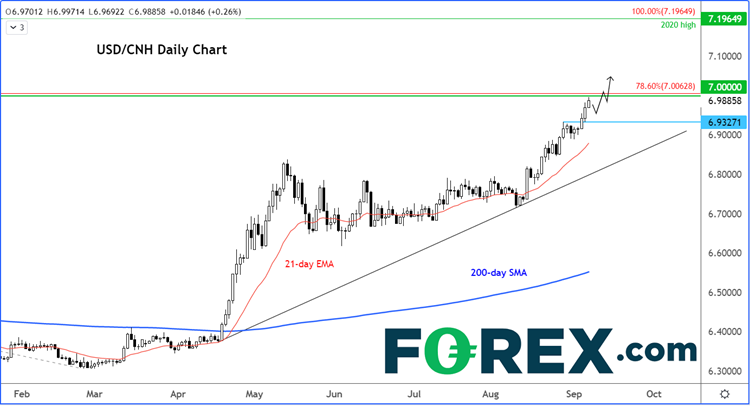